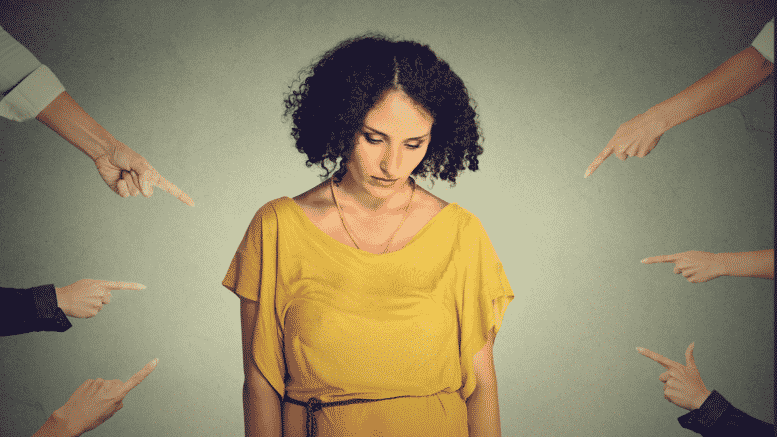 Please Share This Story!
PDF 📄
More and more warnings are appearing over the scapegoat phenomena that characterizes the unvaccinated as less than human and require forced compliance to protect the “common good”. Continued non-compliance must be punished by driving them out of society. ⁃ TN Editor

In my teaching, I prepare undergraduate students to become high school history teachers. In one course, teacher candidates prepare and deliver mock lessons. Their peers play the role of high school students, and I observe and give feedback following these practice lessons. Whether coincidence or a reflection of the times, this fall a good number of mock lessons covered the rise of totalitarianism. In one excellent lesson, a teacher candidate had his students examine the contexts that gave rise to totalitarianism. He accompanied this lesson with an excerpt from a world history textbook listing characteristics of totalitarianism.

This lesson hit on the true purpose for including totalitarianism in high school curricula. That purpose is not to honor the likes of Hitler, Stalin, or Mussolini. Nor is that purpose to provide the methods of totalitarianism as an instructional manual to follow. Rather, the purpose of teaching on totalitarianism is to deliver a warning: heed well the conditions that yielded totalitarianism, so you can recognize and avoid them. As I observed this teacher candidate’s lesson, I could not help but think about that purpose in the context of our present time.

One passage from the lesson’s textbook concerned me the most: “Totalitarian leaders often create ‘enemies of the state’ to blame for things that go wrong. Frequently these enemies are members of religious or ethnic groups. Often these groups are easily identified and are subjected to campaigns of terror and violence. They may be forced to live in certain areas or are subjected to rules that apply only to them” (pg. 876).

Creating an enemy of the state requires othering: a process of dehumanizing through marginalizing a group of humans as something different, less than, and other. Such othered groups become an easy target to scapegoat, unfairly bearing the blame for a society’s ills.

History is replete with examples of othering. The Ancient Greeks othered based on language, labeling those who did not speak Greek barbarians. In the United States, chattel slavery and segregation were sustained through othering based on skin color. In Nazi Germany, Hitler othered based on religion, casting Jewish people as enemies of the state.

Othering frequently plays on people’s stereotypes and fears. In the United States, for example, black men have been othered as “thugs,” playing on fears about violence and criminality. In another example, public health officials in Nazi-occupied Poland played on the primal human fear of disease. Propaganda posters proclaimed “Jews Are Lice: They Cause Typhus.”

Now, some politicians are othering the “unvaccinated.” These politicians attempt to scapegoat and marginalize this minority group, despite knowing that vaccinated and unvaccinated persons alike can contract and spread COVID-19. Below, I provide the words of three politicians as examples of othering language. I also encourage you to read their words in context.

In the United States, President Joe Biden’s September 9 press conference announced sweeping vaccine mandates. He expressed that “many of us are frustrated” with unvaccinated persons. He laid blame on them for the continued pandemic; Biden claimed that this “pandemic of the unvaccinated” was “caused by…nearly 80 million Americans who have failed to get the shot.” He faulted “a distinct minority of Americans” for “keeping us from turning the corner.” And he promised “We cannot allow these actions to stand in the way of protecting the large majority of Americans who have done their part and want to get back to life as normal.”

In a September 17 interview on the Quebec talk show La semaine des 4 Julie, Canadian Prime Minister Justin Trudeau labeled those opposed to vaccination “misogynists” and “racists.” Then, he exclaimed that Canada needed to make a choice: “Do we tolerate these people?”

In France, President Emmanuel Macron gave an interview with Le Parisien on January 4. In this interview, he categorized the unvaccinated as non-citizens, referred to their “lies and stupidity” as the “worst enemies” of democracy, and proclaimed “I really want to piss [the unvaccinated] off.” Macron argued these unvaccinated persons to be only “a very small minority who are resisting,” and asked a chilling question: “How do we reduce that minority?”

In these communications, Biden, Trudeau, and Macron employed several practices of othering.

My hope is that this will all amount to nothing more than ignored political rhetoric – empty bluster these politicians hope will score a few popularity points with their electoral base. My fear is that it will not. Either way, this dangerous othering language must be recognized and condemned.

Historians study causality: contexts, conditions, events and their outcomes. We have examined the conditions that yielded chattel slavery, the gulag, the Holocaust, Jim Crow, Rwanda. This is not an attempt to equate current pandemic policies with these past tragedies.

Rather, this is a warning call. We have seen these conditions before, and we have seen where they lead. Turn back now – that way leads to darkness.

Biden is evil–or was till his brain turned to pudding so he has to have strings and puppeteers. Lucky for us he’s no Mussolini, Stalin, Mao Tse Tung, or Hitler.
Neither Trudeau nor Macron is that charismatic either. Mean-spirited, little pretty boys.

Many people would like to say the George Orwell novel “Nineteen-Eighty-four”, didn’t happen, yet you have these three world leaders: Biden, Trudeau, Macron demonizing the ‘unvaccinated’. “unvaccinated” are evidently the modern ‘scapegoats’ targeted in the ‘othering’ of these leaders rhetoric. If you take a close look at these individuals you have a semi-conscious psychopath, megalomaniac and ‘idiot savant’ in that order. Do you believe these leaders based on the full description of totalitarianism, and the way they fit the mold of tyranny? Then somehow you have missed the point.

We only talk about signs! It is signs.
As I see it, it is a quite shocking change to see family and friends overnight turning into Covidiot Sect members demanding negative tests, masks, vaxx passports, distance, for simple meetings or parties.
The red line is crossed.
The ill idiots are behaving like they have the right to manage the Asylum, and the healthy right thinkers are treated like mental patients.