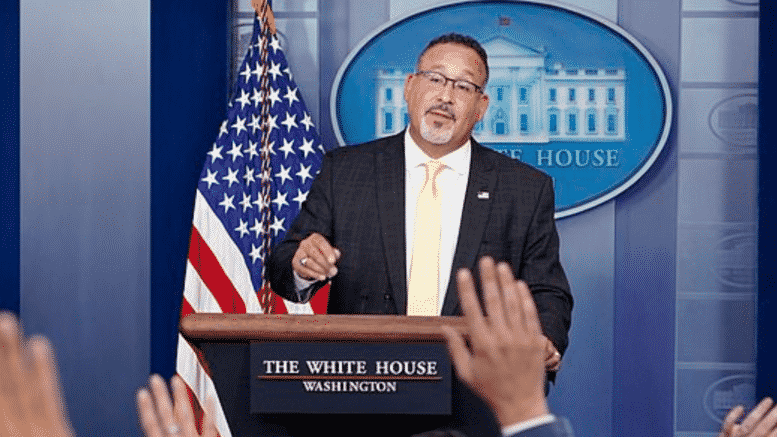 Please Share This Story!
PDF 📄
When the NSBA’s letter to Attorney General Garland suggested that angry school board parents should be likened to domestic terrorists, the AG responded by immediately unleashing the FBI. Now we find out that the Secretary of Education was the one who solicited the letter in the first place.

In plain terms, this qualifies as a full-blown conspiracy: The Secretary of Education, Miguel Cardona, secretly requests that a non-profit NGO write a damning letter to the Attorney General requesting FBI intervention against angry parents who were protesting stubborn school boards. The AG immediately takes up the cause and dispatches the FBI to raid innocent the homes of parents who had committed no crime.

When called out in front of Congress, AG Garland feigned surprise and ignorance of the whole affair. Now we know better that it was an intentional, multi-agency conspiracy to abuse federal power to intimidate political opponents. ⁃ TN Editor

The facts of this shameful case are generally well known: the National School Boards Association (NSBA) wrote to the FBI, asking it to investigate as “domestic terrorism”protests at school board meetings against the introduction of Critical Race Theory into public school curricula. That was bad enough, but now the story has gotten even worse. On Tuesday, Fox News revealed that “Education Secretary Miguel Cardona solicited the much-criticized letter from the National School Boards Association that compared protesting parents to domestic terrorists,” according to an email exchange it had reviewed.

Fox reported that “the email exchange indicates Cardona was more involved with the letter’s creation than previously known. President Biden’s Department of Justice relied on the NSBA letter, which suggested using the Patriot Act against parents, in creating its own memo directing the FBI to mobilize in support of local education officials.”

The smoking-gun email came from the NSBA’s Secretary-Treasurer, Kristi Swett, on Oct. 5. Swett noted that Chip Slaven, the NSBA’s interim top dog, “told the officers he was writing a letter to provide information to the White House, from a request by Secretary Cardona.” The NSBA letter provided this “information” with a tone of overpowering hysteria:

America’s public schools and its education leaders are under an immediate threat. The National School Boards Association (NSBA) respectfully asks for federal law enforcement and other assistance to deal with the growing number of threats of violence and acts of intimidation occurring across the nation. Local school board members want to hear from their communities on important issues and that must be at the forefront of good school board governance and promotion of free speech. However, there also must be safeguards in place to protect public schools and dedicated education leaders as they do their jobs.

This sounds bad indeed, but Megan Fox did a deep dive into the supposed “threats” that school board members had allegedly received that justified FBI intervention, and came up empty. Fox concluded, “There isn’t one legitimate threat on the NSBA’s list or a situation that wasn’t handled easily by the police. What the NSBA wants to do is crack down on free speech and, stupidly, they attached to their letter every example of parents speaking freely and demanding that the FBI stop it.”

Not only has it now been revealed that Cardona asked for this letter, but Fox also reported that “previous emails had revealed that the NSBA was in contact with the White House and Justice Department in the weeks before it publicly sent the letter.”

All this has come to light now because of a Freedom of Information Act (FOIA) request from a group called Parents Defending Education (PDE). PDE President Nicole Neily observed to Fox News that, “Should this allegation be true, it would reveal that this administration’s pretextual war on parents came from the highest levels. Attorney General Merrick Garland unequivocally stated that he based his memo on the NSBA’s letter – which in turn, mobilized the FBI and US Attorneys. If Secretary Cardona was truly involved in this ugly episode, it is a significant breach of public trust, and he should be held accountable.”

And, now, they formed a new domestic terror task force to deal with this issue. Stasi 2.0, the American Version.

Merrick Garland is an avowed communist who was put up for the Supreme Court under the Obama administration. His nomination wasn’t even voted on because of his communist affiliation.

What is it about Chicago that runs the world? It’s like they are the only chosen ones Look at all the demi-gods that come from there that are in high places. “Chicago is a major world financial center, with the second-largest central business district in the United States.[ During much of the last half of the 19th century, Chicago’s politics were dominated by a growing Democratic Party organization. During the 1880s and 1890s, Chicago had a powerful radical tradition with large and highly organized socialist, anarchist and labor organizations.[276] For much of the 20th century, Chicago has been among the largest and most reliable Democratic strongholds in the United… Read more »