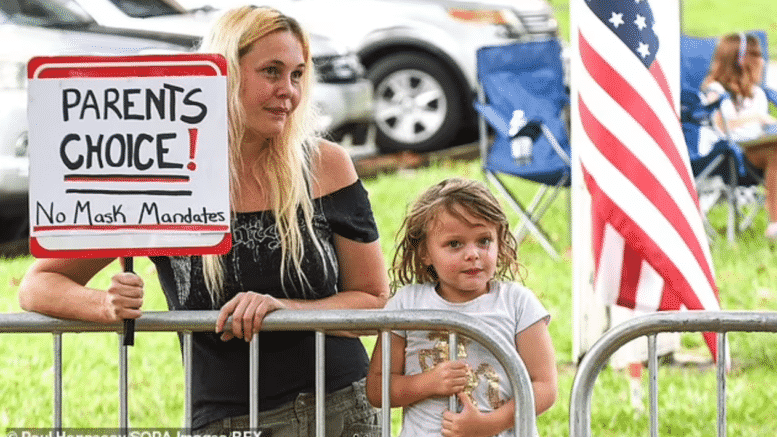 Please Share This Story!
PDF 📄
Elected school boards are whining to the federal government for protection from parents who are angry over their mask and vaccine mandates and Critical Race Theory curricula. This is equivalent to the President ordering the military to crush political opposition in order to remain in office.

Thus, it is the NSBA that is promoting extremist and domestic terrorism policies, not the parents who elected the school board officials in the first place. The First Amendment guarantees the right to “petition the government for a redress of grievances.”  ⁃ TN Editor

An institution representing more than 90,000 school officials across the US begged Joe Biden Wednesday to send FBI and Secret Service agents to protect them from ‘mobs’ of angry parents irate over vaccine and mask mandates forced upon their children – asserting their protests should be treated as ‘domestic terrorism’ by ‘extremist hate organizations.’

In a letter penned to the president and published online, the National School Boards Association implored the US government to take a stand against these vexed parents, stating that teachers and other school staffers are under ‘immediate threat’ because of their burgeoning ‘acts of malice, violence, and threats.’

The complaint, signed by NSBA President Viola Garcia and Interim Executive Director and CEO Chip Slaven, called upon Biden personally to and use his executive power to mobilize FBI and US Secret Service agents to guard school officials.

‘The National School Boards Association (NSBA) respectfully asks for federal law enforcement and other assistance to deal with the growing number of threats of violence and acts of intimidation occurring across the nation,’ the letter to Biden begins.

The correspondence goes on to mention incidents of ‘threats or actual acts of violence’ against school staffers, alleging that ‘angry mobs’ have hindered their ability to hold school board meetings, because of reported outbursts from ‘extremist’ parents irate over vaccine and mask mandates being pressured upon their students in order for them to go to school.

‘As these threats and acts of violence have become more prevalent,’ the org asserts in the note, ‘NSBA respectfully asks that a joint collaboration among federal law enforcement agencies, state and local law enforcement, and with public school officials be undertaken to focus on these threats.’

The complaint then states that the supposed threats and outbursts – or even alleged acts of violence – are ‘impacting the delivery of educational services to students and families,’ and causing school board members and other staffers to resign from their respective posts, citing concerns for their safety.

‘With such acute threats and actions that are disruptive to our students’ well-being,’ the letter continues, ‘we urge the federal government’s intervention against individuals or hate groups who are targeting our schools and educators.’

‘As the threats grow and news of is being reported, this is a critical time for a proactive approach to deal with this difficult issue.’

The NSBA needs to be investigated for ACTUAL extremest and terrorism crimes. They are what amounts to a treasonous communist organization. This is outrageous!

Yet another unlawful entity that should be dissolved, just like the DoE and NEA (et al).
I pray parents get a Holy Spirit revelation concerning the deeper purposes of the Certificate of Live Birth paper and the school registration process, and what contractual powers it supposedly gives to Child Perversion Services.

Too many bureaucrats involved in too many areas of people’s lives. This is probably one of the main reasons that people have less freedoms and more troubles to live with. There are some who no doubt feel the need for a nanny state and expect everyone else to love one.