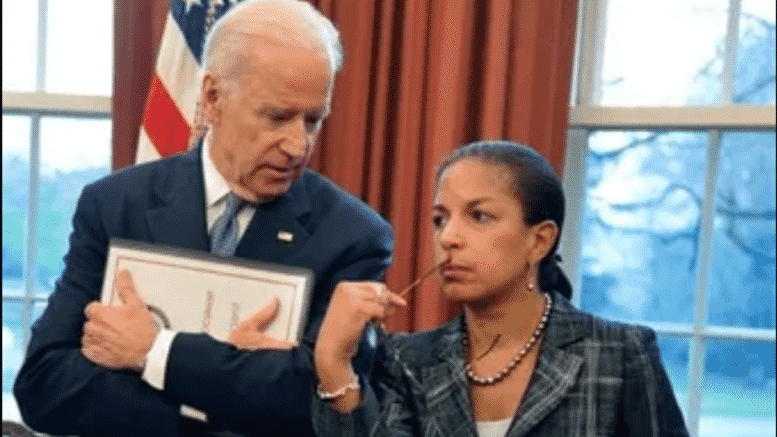 Posted By: Bethany Blankley via The Center Square September 16, 2021

Please Share This Story!
PDF 📄
Technocrats in the Biden Administration gaslight the American people by saying that his vaccine mandates are “not political” but only seek “to save the lives of American people.” Hundreds, if not thousands, of lawsuits will prove otherwise. Biden’s policies expose the lawlessness of his Administration.

The Domestic Policy Council (DPC) of the United States is the principal forum used by the President of the United States for considering domestic policy matters, excluding economic matters, which are the domain of the National Economic Council. The council forms part of the Office of White House Policy, which contains the DPC, the National Economic Council, and various subordinate offices, such as the Office of National AIDS Policy. The Director of the DPC is titled the Assistant to the President and Director of the Domestic Policy Council.

Rice and Biden have had a very close friendship and working relationship over the years. She was a leading candidate for Vice President prior to the selection of Kamala Harris.

Did Rice play a role in Biden’s mandate policies? As Director of the DPC, unquestionably so.

Twenty-seven Republican governors or attorneys general have vowed to fight the latest executive order issued by President Joe Biden mandating that over 80 million private employees receive COVID vaccinations or undergo weekly testing, or their employer will be fined.

The executive order directs the U.S. Department of Labor’s Office of Safety and Health Administration (OSHA) to require private businesses with more than 100 employees mandate that their workers receive both doses of the COVID-19 vaccine or undergo weekly testing. Noncompliance would result in fines of $14,000 per violation.

Florida Gov. Ron DeSantis, with whom Biden has sparred over mask mandates and vaccine passports, said Florida would fight back.

“When you have a president like Biden issuing unconstitutional edicts against the American people, we have a responsibility to stand up for the Constitution and to fight back, and we are doing that in the state of Florida,” he said. “This is a president who has acknowledged in the past he does not have the authority to force this on anybody, and this order would result potentially in millions of Americans losing their jobs.”

Missouri Gov. Mike Parson said, “OSHA cannot dictate personal health care decisions for Missourians. Missouri is not under an OSHA state plan, and Parson will not allow state employees to be used to enforce this unconstitutional action.”

South Carolina Gov. Henry McMaster vowed to fight Biden, saying, “The American Dream has turned into a nightmare under President Biden and the radical Democrats. They have declared war against capitalism, thumbed their noses at the Constitution, and empowered our enemies abroad. Rest assured, we will fight them to the gates of hell to protect the liberty and livelihood of every South Carolinian.”

Indiana Attorney General Todd Rokita indicated he was working with a group of AGs to file a lawsuit. “My team and I, along with other like-minded attorneys general, are reviewing all legal action on how to stand against these authoritarian actions by the Biden administration,” he said in a statement.

The Republican National Committee also announced it was suing “to protect Americans and their liberties” if the proposed rule change were to go into effect.

He said, “… those governors that stand in the way, I think, it was very clear from the president’s tone today that he will run over them. And it is important. It’s not for political purposes. It’s to save the lives of American people. And so, we won’t let one or two individuals stand in the way. We will always err on the side of protecting the American people.”

We must all fight too as individuals, and educate people when we get the opportunity. If we don’t rise up we are in great peril: https://www.cdc.gov/quarantine/quarantine-stations-us.html Don’t think just cause your vaccinated you will escape. No no no, they will keep you jabbed!

So Cedric Richmond says, “We will always err on the side of protecting the American people.” Really!! Were not Americans left behind in Afghanistan? Are not thousands of Americans dying and injured subsequent to taking the fake vaccines? Are not millions of little, innocent Americans being allowed to be murdered in the womb by your Dictator-in-Chief? Yours is a morality of death Mr. Richmond. I would ask God for forgiveness now.

If you want us to view a video please post another link–not YT.

Arizona Gov. Doug Ducey said, “Governors don’t report to Joe Biden. Governors don’t report to the federal government, the states created the federal government, and Joe Biden has stepped out of his reach,” No doubt at all Ducey. Biden is the UN/CCP/WEF’s bitch and Rice, a politico with whom we are all familiar, can sit on it. “…Cedric Richmond, a former Democratic congressman from Louisiana… said, “…the president’s tone today (is) that he will run over them…(lie, lie, lie, yada, yada, yada) …And so, we won’t let one or two individuals stand in the way.” One or two? Love how… Read more »

So who will be the first, Governor Ducey? Enough TALK and GET TO YOUR STATEHOUSE and withdraw from the OPPRESSION!

Sadly the governors will keep suing instead of SECEDING there’s no honor in obeying evil leaders! Taliban knows this, the West has got to get a grip before it’s too late! The technocrats are just getting started.

So are we, Victor! We are just getting started. Take another look. I think the technocrats and their globalist fascist buddies are on the edge of complete and total failure. They only have bluff; that’s it. If you have to pound the public 24/7 with propaganda in an effort to convince the world that you are in control, we should just give in and do what we’re told then die off as expected you are desperate. BULLY TALK is all they have. So… Do not believe anything EVER coming out of the FakeSM. I assume since you are here you… Read more »

I can feel it… coming in the air tonight…

President Xiden condemns himself, he is enabling MURDERING BABIES and thus cannot be “saving lives” – he belongs in hell forever. It’s clear Washington has gone rogue against the people, the way of the world against the people, the globalist technocrats have got us right where they want us! Time to END THE OPPRESSION withdraw from the US who will be first to leave? I think Texas or Florida can survive as independent NATION STATES. There was a reason they wanted the state flag down in South Carolina before last election and why they’re tearing down statues of General Lee.… Read more »