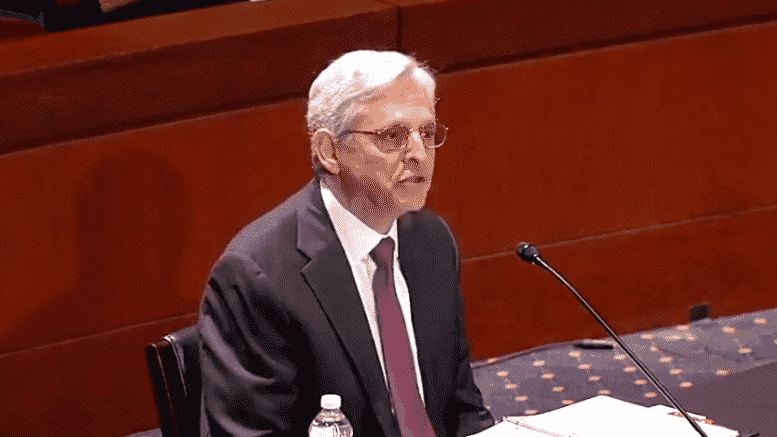 Please Share This Story!
PDF 📄
Under sworn testimony to the House Judiciary Committee, Garland was pried open by Rep. Jim Jordan (R-OH) to admit the only reason he targeted school student’s parents was a spurious letter that he received from the leftist National School Boards Association. The whole incident smacks of Technocrat manipulation. ⁃ TN Editor

U.S. Attorney General Merrick Garland admitted during a hearing of the House Judiciary Committee Thursday he took the word of the National School Boards Association (NSBA) that parents voicing concerns at their local school board meetings should be targeted as “domestic terrorists.”

Attorney General Garland’s only “evidence” that parents are “threatening” school board members?

The radically liberal National School Board Association told him so.

“When the National School Boards Association, which represents thousands of school boards and school board members says that there are these kinds of threats,” Garland told Rep. Jim Jordan (R-OH), who pressed the attorney general on the fact that the very first sentence of his memorandum dated October 4 stated:

Citing an increase in harassment, intimidation and threats of violence against school board members, teachers and workers in our nation’s public schools, today Attorney General Merrick B. Garland directed the FBI and U.S. Attorneys’ Offices to meet in the next 30 days with federal, state, Tribal, territorial and local law enforcement leaders to discuss strategies for addressing this disturbing trend. These sessions will open dedicated lines of communication for threat reporting, assessment and response by law enforcement.

“When did you first review the data concerning this so-called ‘disturbing’ uptick?” Jordan asked during the hearing.

“So, I read the letter, and we have been seeing over time – “ Garland said.

“So, you read the letter, that’s your source?” Jordan pressed. “Are there some studies on that or some investigation someone did that said there’s been a disturbing uptick, or did you just take the words of the National School Boards Association?”

“When the National School Board Association, which represents thousands of school boards and school board members says that there are these kinds of threats,” Garland repeated. “When we read in the newspapers reports of threats of violence, when that is in the context of threats of – “

A fight broke out at a House Judiciary hearing after Rep. Nadler blocked Rep. Jordan from playing a video of parents at school board meetings pic.twitter.com/Fcc2WFsgjf

State school boards associations throughout the country have been distancing themselves from the letter sent by NSBA to President Joe Biden, imploring him for federal law enforcement assistance to deal with parents angry and frustrated over Critical Race Theory indoctrination in their children’s classrooms and mask mandates.

Old and busted: The War on Terror
New hotness: The War on Citizens Who Dissent from the Regime https://t.co/4pWmMLgINw

Attorneys general from 17 states also signed onto an effort to prevent the Biden Department of Justice from threatening vocal parents who express their concerns to school officials with investigation by federal law enforcement.

Indiana Attorney General Todd Rokita (R) wrote, “The October 4, 2021 Memorandum repeats the canard that ‘there has been a disturbing spike in harassment, intimidation, and threats of violence against school administrators, board members, teachers, and staff,’” … adding:

To be sure, anyone who attacks or threatens violence against school administrators, board members, teachers, or staff should be prosecuted. However, in its letter demanding action, the NSBA fails to document a single legitimate instance of violence. And even if it did, there are sufficient criminal and civil remedies already available in all 50 states and territories.

“So, I read the letter, and we have been seeing over time – “ Garland said.” “When the National School Board Association, which represents thousands of school boards and school board members says that there are these kinds of threats,” Garland repeated. “When we read in the newspapers reports of threats of violence, when that is in the context of threats of – “” DUH!? You mean I have to be evidentialityized? No fair! I need my participation trophy! Waaaaaah!!! Waaaaah!!! Waaaaah!!! Seriously, I just watched the movie IDIOCRACY. Have you seen that 2005 movie? If you haven’t, no worries.… Read more »