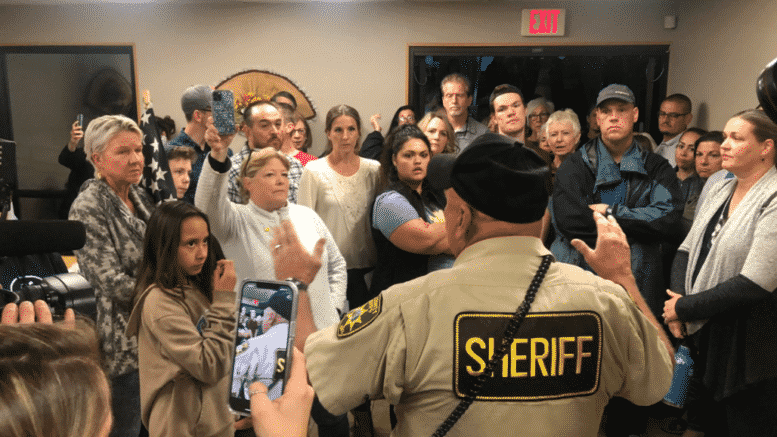 Please Share This Story!
PDF 📄
Local activism is the only way to change policy and direction of civic matters. Angry parents in Vail, Arizona rose up to take over their local school board that refused to listen to them. The existing board fled, then parents elected a new board on the spot. ⁃ TN Editor

On Tuesday, the Vail School District in southern Arizona was scheduled to discuss its mask policy after Gov. Doug Ducey enacted a new executive order that lifted the state’s order to require face masks in schools.

In response to the meeting, more than a hundred parents rallied for the Vail School District to drop the mask mandate.

But just moments before the meeting was scheduled to take place, school officials abruptly decided to cancel the meeting, citing safety concerns over the parents’ protest.

A sheriff's deputy says the meeting has been canceled. Upset parents want to know why. There are dozens gathered at the door… others in the parking lot. pic.twitter.com/MjjEIAWvKT

A throng of parents later pushed their way into the board room while refusing to wear masks and demanded to speak with their elected officials.

In response, the Vail board called 911, and Pima County Sheriff Nanos told KGUN 9, a sergeant and four deputies showed up in just over a minute.

The district said the sheriff told the board to adjourn the study session because the crowd was uncontrollable.

But the Sheriff says that’s false, the board made that decision on their own, and crowd control was not an issue.

Emotions quite high.. Parents demanding answers from the sheriff's deputy as to why the school board left. The deputy trying to explain the meeting is canceled for tonight. @KVOA pic.twitter.com/nutYVKkShM

Emotions ran high as parents confronted law enforcement, demanding to know why the board canceled the meeting. “They [school board] have the audacity to leave when we come here as peaceful parents to talk to them,” one parent passionately asked.

Following the adjournment, the parents, under Robert’s Rules of Order, voted in a new school board. Then, the new members voted to end the mask requirement in Vail Schools. Whether this procedure to install new board members is legally valid remains in contention.

“Vail School Board violates Arizona open meeting law, refuse to hear from the people, and goes home. So, the People hold quorum, call their own meeting to order, elect a new School Board, and immediately vote to CANCEL the mask mandate – along with voting to disallow any medical procedure being forced on the children or employees. This is how you take back power from a tyrannical government.

Great work to the parents of the students in Vail School District.”

I was there! It was a peaceful demonstration and a lot of good energy. I hope the new board is successful in pushing out the old board!

Will Brown
Reply to  Janet Zampieri

It’s a wonderful development! If I was a parent with children in school I would do the same.

This will likely end in court but child abuse never looks good especially by members of a school board. Good on the people of Vail as no matter how a court decision goes they will ultimately win as this board must now step down.

All the old Board has is possibly trumped-up bulls*hit laws which can be easily changed
AND almost immediately if you guys stick with it. Consequently, they are toast AND they should be such. More communities need to heed this message and take control of tyrant local and state governments, especially in the face of forced gene therapy injections directed at children without consulting anyone at all while renaming and hiding their totalitarian intent–just like what the jerks tried to do in Orange County, CA. The citizens of Vail didn’t let that happen to them, either.

Time to lather, rinse and repeat across the country!

This nis what we need to do with this current administration in the White House!!

This was Brilliant. This should be a poster Child for dealing with your school boards. show up in Mass

Bravo Arizonia parents! This is a template for the rest of the country to take back their rights and power from the leftists.