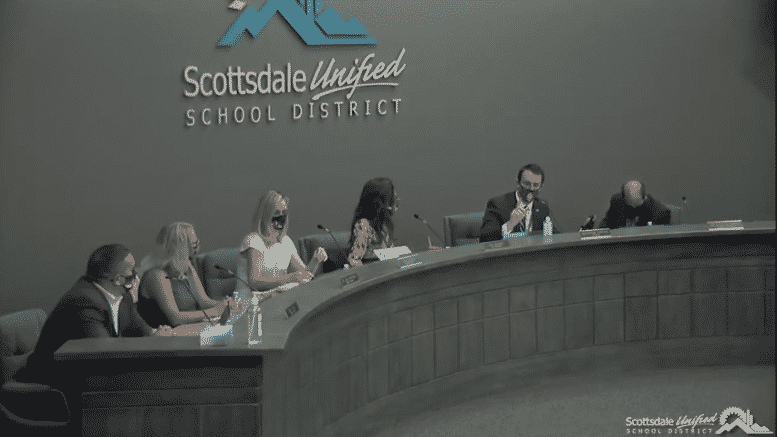 Please Share This Story!
PDF 📄
Mean-spirited Technocrats at the Scottsdale, AZ school board figured it was a good idea to build dossiers on parents who dissented against them at school board meetings. No matter that it was an egregious violation of law, ethics and the Constitution. Parents are rightly demanding resignations. ⁃ TN Editor

Parents in Scottsdale, Ariz. are pretty upset over the actions of their school board. Sure, parents all across the country are angry, but Scottsdale parents have even more reason to be. You see, someone tied to their school board has kept a dossier of parents who dissented at board meetings.

More than 600 parents in Scottsdale, Arizona, are demanding the resignation of the school board president after a shocking revelation.

The president, or possibly his father, appears to have kept a dossier on 47 parents who dared to speak out against his policies at school board meetings — a dossier complete with Social Security numbers, background checks, a divorce paper, mortgage documents, trade certifications, and screenshots of Facebook posts.

No matter the purpose of the dossier, parents are understandably livid.

Over 650 parents have signed a petition calling for the resignation of SUSD Governing Board President Jann-Michael Greenburg.

The Scottsdale Independent pointed out that multiple people had access to what the paper has dubbed “the Greenburg files — including the school board president and his father, Mark Greenburg.

The digital dossier is housed on Google Drive and contains content, including photos of district parents and at least one minor, personal financial documents, including professional certifications, and mortgage statements.

The Google Drive shows these people linked to the account:

Jann-Michael Greenburg denies any dealings with the dossier, but his replies to questions from the paper sound awfully defensive.

“We are going to have forensic IT staff look into this and figure out what that is. You can file with law enforcement, I am not sure even why we are looking at these photos.”

Hook ‘um and bring ‘um in Scottsdale parents! If you do not take care of this problem right now you will have to deal with them and their conspirators among the Board. You’ll regret a lack of action forever. You don’t even have to think about this–these creepy totalitarians are teaching your children bad things, very, very bad things if they are keeping Chinese social behavior dossiers on any parent. They are acting precisely as a Chinese totalitarian government would and they expect you to comply. Find the entire lot of them. DO NOT let even one of them get… Read more »