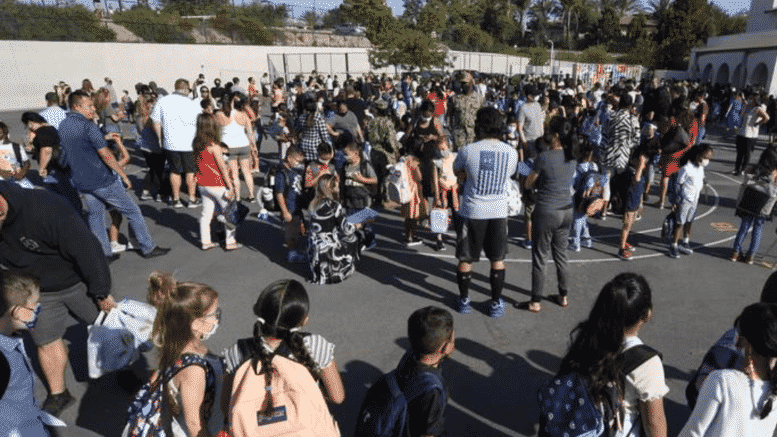 These are the faces of domestic terrorism? Sorry DoJ, big fail on your part. AP Photo/Denis Poroy

Please Share This Story!
PDF 📄
A few days ago I wrote that the NSBA and DoJ had made a strategic error in attacking middle-American soccer moms who are fed up with the harm being done to their children at the hands of tyrannical school boards. They have awakened the masses of angry momma-bears who aren’t going to take it any more! ⁃ TN Editor

Last week, PJ Media covered the hysterical and threatening letter written by National School Boards Association (NSBA) president Viola Garcia. In the letter sent to none other than President Joe Biden, Garcia accused America’s concerned parents of threats, intimidation, and even “hate crimes” rising to the level of “domestic terrorism” for having the gall to speak up at their local school board meetings. The NSBA also requested “federal assistance to stop threats and acts of violence against school board members, school officials, and teachers.”

This week, however, the leaders of almost two dozen parent organizations fired back with a scathing letter of their own—and it is epic. The letter, written on behalf of members of several parent organizations, made clear that the NSBA’s claims of  “hate” and “terrorism” were shameful:

NSBA cites a tiny number of minor incidents in order to insinuate that parents who are criticizing and protesting the decisions of school boards are engaging in, or may be engaging in, “domestic terrorism and hate crimes.” NSBA even invokes the PATRIOT Act. The association of legitimate protest with terrorism and violence reveals both your contempt for parents and your unwillingness to understand and hear the sincere cries of parents on behalf of their children. To equate parents with terrorists dishonors the thousands of victims of actual terrorism around the world. Have you no shame?

The parent organizations pointed out that the NSBA’s call for the federal government to use its power against parents was in itself a menacing and “thinly veiled threat, intended to intimidate into silence and submission the very constituents that [the NSBA] members ostensibly represent.” I mean, what else would you call asking the president to sic the Department of Justice, the FBI, Homeland Security, the Secret Service Assessment Center, and the Postal Service on America’s parents?

By contrast, America’s parent organizations “unequivocally oppose violence” and are made up of, not “domestic terrorists,” but “concerned citizens who care deeply about their community’s children – and who are concerned by the direction that America’s schools have taken.” It’s no secret many parents across the country are angry with what is happening (or not happening) in our taxpayer-funded schools:

Citizens are angry that school boards and school officials around the country are restricting access to public meetings, limiting public comment, and in some cases conducting business via text messages in violation of state open meetings laws.

They are angry that schools are charging them thousands of dollars in public records requests to view curriculum and training materials that impact their children and that should be open to the public by default.

They are angry that pandemic-related learning losses have compounded the already-low reading, writing, and math proficiency rates in America’s schools.

Parents are ultimately angry that rather than working to improve student achievement so our children actually learn in our country’s schools, “large numbers of districts have chosen to fund, often with hundreds of thousands of dollars in taxpayer money, ‘social justice’ and ‘diversity, equity, and inclusion’ programs with finite resources.”

It is very revealing that instead of listening to and addressing the concerns of parents, the NSBA chose “to smear their constituents rather than engage with them in good faith.” The concerns of parents are, of course, due to the leftist policies embraced and implemented by the school boards that are supposedly accountable to the parents of their respective districts.

“It is appalling that [NSBA] would choose to threaten your fellow Americans for having the courage to hold you accountable for your failures,” said the parent organizations. “We will not be bullied. We will not have our speech chilled. We have a constitutional right to petition our elected officials, and we will continue to do so” in order to “address and improve the quality of America’s public education system for all children.”

Bravo to America’s “parents, grandparents, and concerned citizens” for not being intimidated by the NSBA’s shameful tactics and for putting America’s children first in the face of blatant leftist bullying.

Several months ago I commented on this very item writing that if mothers became angry they would organize and wipe out the fascists. Nothing happened. Being a woman, I’m intimately aware that women do not forgive actions that put their children at risk (MADD). And moreover, they never forget them. I was elated to see here that the numbers of aware parents are beginning to rise in the USA. Fascist thinking fear groups like the NSBA had to call them terrorists before than happened. They are awakening to what is right on their doorsteps. So that’s a positive for all… Read more »

I hate to break the news to you……but ‘MADD’ is NOT what you think it is.

It was an historical example of mothers taking control, not a political statement or position. Nor was it a drill down on today’s MADD organizational issues.

You left out a lifetime of slavery beneath sadistic globalist overlords.

Well, you said it. So good.

This is what has been allowed to teacher your children. The Big Bang, Mother earth, Gaia, Global Warming, goddesses, and gods like the Roman gods, sex and how to do it, abortion and how to do it, telling on your parents, pagan religions, Yoga, homosexuality as normal and healthy, animals are worth more than people, money grows on trees so you just take it you know that is called covetousness? They have been taught hate, to love themselves more than anyone else, and lastly they have been drugged, and hypnatised.

In my opinion, this letter to the NSBA does not go FAR ENOUGH! NSBA had issued a MAJOR, MASSIVE THREAT AGAINST AMERICAN PARENTS. To counter that THREAT, an EQUAL one should be given FROM American Parents, to the NSBA. Something along the lines of……”If ANY American Parent should come face to face with the NSBA’s ‘attack dogs’ (FBI, Homeland Sec, ect), with THREATENING behaviors, American Parents will then have the Right to DEFEND THEMSELVES, and THEIR FAMILY, AS THEY SEE FIT. NSBA et al have now been put on LAWFUL & LEGAL NOTICE!”. Let me ask people this: In many… Read more »

I see someone thought it through. Excellent.

OK moms and dads. You’re getting their attention. First do not and that’s a DO NOT take anyone not represented by the school board to a school board meeting. Do, take your children and if your baby is whiney the better. Nothing grates on the nerves more than a whiney baby. Second. Be civil and polite. Don’t threaten violence or commit violence. Third, for each School Board Meeting that by law must be posted in advance, get as many constituent parents to attend as much as possible. Fourth. Poll those people and seperate them into two groups, those who support… Read more »

Excellent information and right on target. I’ve participated in such controversial meetings where elected officials stood with corporations against the public. From firsthand experience I can attest that being organized before entering the building is KEY to control of the narrative once inside. If each parent gets the floor for only 3-minutes then stack the deck. Write an entire presentation for the meeting and had it out to parents in 3-minutes increments. I’ve done this. It works and they have no recourse except to listen, as do the decenters who want to comply. “You will be tried in the public… Read more »

Land of the free

You let the state use your children they will run the country later. Remember the Nazis,Mao?