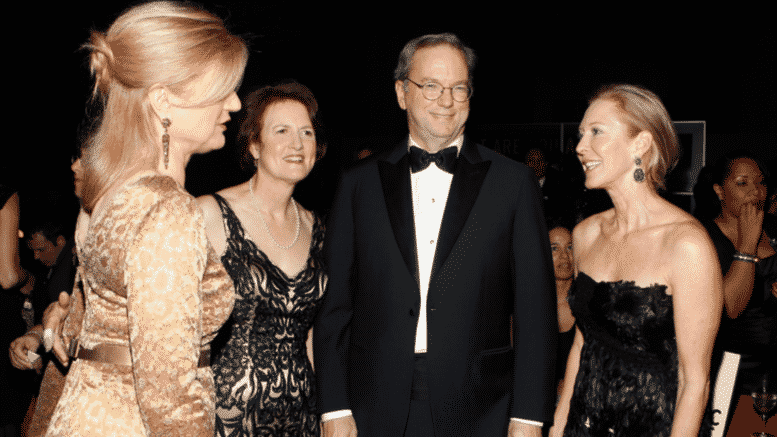 Please Share This Story!
PDF 📄
Ponder for a few minutes the strange ascendance of Eric Schmidt from a software nerd to the heir apparent of fellow Trilateral, Henry Kissinger. Like many Trilaterals (e.g., Jeffrey Epstein, Bill Clinton), Schmidt discarded ethics and morality for a lifestyle that included an “open marriage” and multiple adulterous affairs. ⁃ TN Editor

By now, many know the legend of Eric Schmidt—how, back in 2001, Google’s young co-founders, Larry Page and Sergey Brin, brought him into the company in its critical early years to be “the adult in the room” and instill discipline in their unruly, fast-growing start-up.

The boys—28 and 27 years old at the time—had first hoped Steve Jobs might take the gig. Not to be. Later they were introduced to Schmidt, a seemingly mild-mannered 46-year-old in a baggy suit who was C.E.O. of Novell, a software company that was losing ground to Microsoft. On the surface the three didn’t seem to have much in common. Until, that is, the conversation turned to Burning Man, the quasi-apocalyptic, sometimes druggy, often free-swinging sex-fest in the Nevada desert, of which Sergey and Larry were big, big fans.

Schmidt was the third candidate to be offered the job, and the first one to say yes. His compensation that first year was $250,000, plus a bonus of $300,000, but that all paled in comparison to the 14.4 million Google shares—6 percent of the company—he also received.

By many metrics, Schmidt succeeded wildly. Marissa Mayer, an early Google employee who later was C.E.O. of Yahoo, tells me, “Eric was able to see around corners in ways that nobody else could. Including the founders.” He got the company focused on a mission, and in doing so helped it to become the behemoth it is—mostly by convincing Page and Brin to turn the search engine into a gigantic advertising machine.

“Eric kept us laser-focused on how to build the best in what actually mattered,” Mayer says.

He also guided it to its landmark I.P.O., in 2004, which raised $1.9 billion. It was a deal that made the founders spectacularly wealthy, as it did Schmidt. (Since then, the stock is up some 4,400 percent. Google’s ad revenue in the first quarter of 2021 was nearly $45 billion, and the company is now the fifth most valuable in the world.)

Still, in Silicon Valley, Schmidt is a bit of an outlier. Always has been. And unlike many of the top names on the Bloomberg Billionaires Index—Bezos ($195 billion); Musk ($171 billion); Gates ($146 billion); Zuckerberg ($112 billion); Page and Brin ($105 billion), all of whom built businesses from their own ideas—Schmidt (No. 74, with a worth of $24 billion) has created exactly … nothing.

In other words, Schmidt got rich the old-fashioned way. He is one of the few people on the Bloomberg list who became hyper-wealthy not by what he made but by the moves he made—specifically, by latching onto the right people at the right time and then making what they made better.

Yet while Brin and Page hired Schmidt to be the adult in the room, across the years he has gained a reputation for being just about anything but—at least when it comes to social mores and women who are not his wife. These days, thanks to Jeff Bezos’s and Bill Gates’s dramatic busts from their respective first wives, MacKenzie and Melinda, it might appear that tech dudes are going through something of a market re-alignment, at least with their significant others.

But for all the drama surrounding Bill and Jeff, these two seem positively, well, adult next to Schmidt. Technically, the wayward former Google C.E.O. is still married to Wendy Schmidt—but he enjoys the benefits of a marriage that is, as it were, a very open and, at times, a very awkward secret.

As one person who has spent time with Brin and Page tells me, “Eric was a serial, very evident philanderer…. And I know that it drove a lot of people crazy around Google, not just Larry and Sergey. They just basically didn’t like him.” Which makes you wonder why Brin and Page turned a blind eye to Schmidt’s behavior for so long, and if his antics ultimately made him a corporate liability they had to defease. (Google did not respond to requests for comment.)

I am a former Novell network engineer and instructor, and the person responsible for creating the CompTIA Server+ certification. One thing that has ALWAYS interested me is this: – Back in the day, there was another Facebook out there, MyPlace or something similar if memory serves (correct me if I am wrong, but the exact name doesn’t matter). I believe they were in the space first, but Farcebook came along, and the other one just disappeared. I assumed Facebook just had a better biz model at the time. Maybe…. except that this is just one of many examples, as below… Read more »

Well, glad to hear an eye witness confirm the negative sentiment for Schmidt in his early days at Novell. He wasn’t more highly esteemed at Google, but he was tolerated for what he could get done – manifested only after their codex “Do no evil” was dropped. What secured the Google CEO post was that he was a “Burner” along with Page and Brin. That was the deeply occult experience that they all had in common. Btw, I was a certified Novell engineer for a time until I hooked onto certification with the Lotus Notes infrastructure. I am so glad… Read more »

Interesting to hear this side of your life Patrick 😉😂 lol.😆

I remember all the changes you noted quite clearly and thought similarly about them at the time. Thanks to Brandon Eich we have Brave. DuckDuckGo has been my choice since it’s inception. I used Mozilla from it’s inception as well until they sold out.

Thanks for the inside perspective.