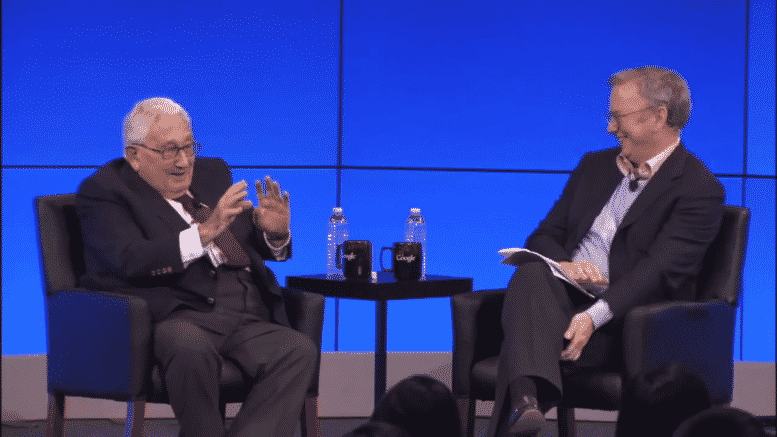 Please Share This Story!
PDF 📄
Schmidt is a member of the Trilateral Commission.  While at Google, he pioneered secretive “surveillance capitalism” using AI that skirted and defied legal control while making multiplied billions in the process. Now he is helping to write AI legislation in Washington without publicly declaring his own massive investments in AI. ⁃ TN Editor

About four years ago, former Google CEO Eric Schmidt was appointed to the National Security Commission on Artificial Intelligence by the chairman of the House Armed Services Committee.

It was a powerful perch. Congress tasked the new group with a broad mandate: to advise the U.S. government on how to advance the development of artificial intelligence, machine learning and other technologies to enhance the national security of the United States.

The mandate was simple: Congress directed the new body to advise on how to enhance American competitiveness on AI against its adversaries, build the AI workforce of the future, and develop data and ethical procedures.

In short, the commission, which Schmidt soon took charge of as chairman, was tasked with coming up with recommendations for almost every aspect of a vital and emerging industry. The panel did far more under his leadership. It wrote proposed legislation that later became law and steered billions of dollars of taxpayer funds to industry he helped build — and that he was actively investing in while running the group.

His credentials, however, were impeccable given his deep experience in Silicon Valley, his experience advising the Defense Department, and a vast personal fortune estimated at about $20 billion.

Five months after his appointment, Schmidt made a little-noticed private investment in an initial seed round of financing for a startup company called Beacon, which uses AI in the company’s supply chain products for shippers who manage freight logistics, according to CNBC’s review of investment information in database Crunchbase.

There is no indication that Schmidt broke any ethics rules or did anything unlawful while chairing the commission. The commission was, by design, an outside advisory group of industry participants, and its other members included well-known tech executives including Oracle CEO Safra Catz, Amazon Web Services CEO Andy Jassy and Microsoft Chief Scientific Officer Dr. Eric Horvitz, among others.

Schmidt’s investment was just the first of a handful of direct investments he would make in AI startup companies during his tenure as chairman of the AI commission.

“It’s absolutely a conflict of interest,” said Walter Shaub, a senior ethics fellow at the Project on Government Oversight, and a former director of the U.S. Office of Government Ethics.

“That’s technically legal for a variety of reasons, but it’s not the right thing to do,” Shaub said.

Venture capital firms financed, in part, by Schmidt and his private family foundation also made dozens of additional investments in AI companies during Schmidt’s tenure, giving Schmidt an economic stake in the industry even as he developed new regulations and encouraged taxpayer financing for it. Altogether, Schmidt and entities connected to him made more than 50 investments in AI companies while he was chairman of the federal commission on AI. Information on his investments isn’t publicly available.

All that activity meant that, at the same time Schmidt was wielding enormous influence over the future of federal AI policy, he was also potentially positioning himself to profit personally from the most promising young AI companies.