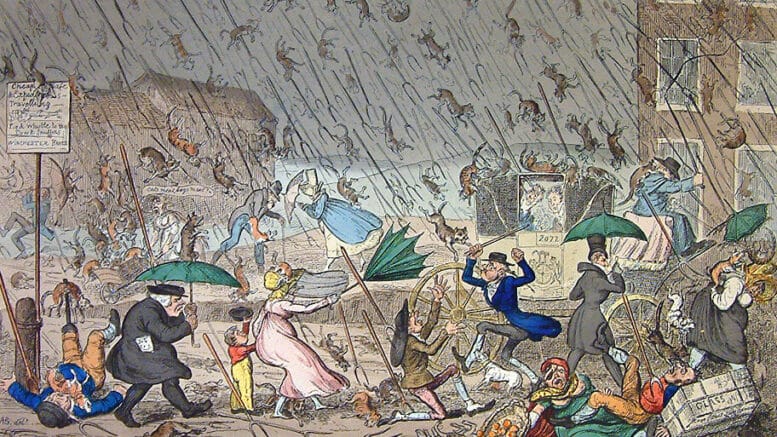 Please Share This Story!
PDF 📄
The currently dominant class of Technocrats and Transhumanists must be so thoroughly rejected that they never get the upper hand in public policy again. They are pitted against government structures and the people they represent. This is a global issue, not just American. As such, they have declared war on humanity. ⁃ TN Editor

Storms come in many forms and may consist of many different constituent elements, but when all these elements combine at the same critical moment, we call it a “perfect storm.” When such a storm is transposed analogically to the cultural, political, and economic realms, that is, when it seems to impact the entire social environment, we have no choice but to grasp its significance and prepare for its onset by taking protective measures.

Such a storm is now upon us. All its elements clearly point to an orchestrated intention; in other words, it cannot be an accident. And the intention we discern in the current historical moment, the underlying plan, would appear to lay the ground for what has been called a “techno-totalitarian digital dark age,” associated with the Club of Rome, the United Nations, and the World Economic Forum, that is, what has come to be known as the Great Reset — the corporate takeover of property, health, currency, travel, energy, and sustenance. The upshot involves a thorough restructuring of democratic society along neo-medieval lines, an elimination of the middle class, a two-tier political order, and a reduction of the global census.

The sinister elements composing this storm are readily observable to anyone paying attention:

All these factors are occurring at the same time, that is, they are components of a perfect storm brought to bear on the global community — or, more accurately, on the community of Western nations. (“Civilization states” like Russia, China, and India, are largely immune to the concerted onslaught.)

One cannot credibly deny that there exists a conscious purpose behind so evident a concatenation of simultaneous events, envisaging a new and reductionist world order and population diminishment in every sense of the term. The liberal civilization of the West is to be replaced by an anti-capitalist global coup favoring a totalitarian governing class. Indeed, to change the metaphor, what is impending is a kind of “mass extinction event” on the level of culture, state, and civilization, a kind of ideological asteroid or “planet killer,” orbiting very close to the future.

In his 2020 Ted Talk, Bill Gates asserts that “if we do a really great job on new vaccines, health care, and reproductive health services, we could lower [world population] by ten or fifteen percent.” Vaccines and boosters seem to be having precisely that effect. Gates’ posing with WHO Director-General Tedros Adhanom Ghebreyesus, an Ethiopian Marxist revolutionary, should tell us all we need to know. Klaus Schwab’s Great Reset, backed by leading politicians, NGOs, technocrats, and globalist oligarchs, would reduce the free world geopolitically and demographically to near-global servitude.

For additional confirmation, one need only read the Meadows/Randers influential and updated book, Limits to Growth, adopted by the Club of Rome. As Dennis Meadows claims in a recent interview with the leftist online magazine Resilience, “I don’t know what a sustainable population level is now, but it’s probably much closer to a billion people, or fewer.” The authors are skeptical of growth as a function of what they call “overshoot,” of “go[ing] beyond limits accidentally,” which can ultimately produce an “ecological footprint” that is unsustainable. They do not recognize that growth and its negative offshoots can be managed without employing drastic solutions — solutions that are themselves a product of overshoot. “If a profound correction is not made soon,” they warn, “a crash of some sort is certain.” The trouble is, they are the crash.

Of course, there is nothing new in their deposition. They advance what is essentially a Malthusian argument that posits an inverse ratio between (geometrically increasing) population growth and (arithmetically increasing) material resources. Paul Ehrlich’s 1968 bestseller The Population Bomb, in true Malthusian fashion, famously proclaimed that “the battle to feed all of humanity is over [and that] civilization collapse is imminent.” Interestingly, none of his dated predictions have come to pass.

Indeed, the theory of universal implosion has been long discredited. Science writer Ronald Bailey, for example, puts paid to the thesis in The End of Doom, ridiculing the Malthusian refusal to “let go of the simple but clearly wrong idea that human beings are no different than a herd of deer when it comes to reproduction.” Humans are reasoning animals — at any rate, some humans — capable of dealing with pressing and seemingly intractable problems through genuine scientific discoveries and innovative approaches developed over time. As Matt Ridley mentions in his informative The Evolution of Everything, even Malthus was not a thoroughgoing catastrophist, proposing late marriage as a solution to overpopulation.

Nevertheless, our latter-day Malthusians, Resetters, and plutocratic Marxists persist in advancing their campaign, like avid but errant disciples of Francis Galton who claimed, “What nature does blindly, slowly, and ruthlessly, man may do providently, quickly and kindly.” The “kindly” part soon dropped out of the formulation and negative eugenics, entailing involuntary sterilization, eventually emerged as a solution to the problem of overpopulation and declining resources. (As Nicholas Wright Gillham writes in his fascinating biography A Life of Sir Francis Galton, “What eugenics wrought in the first half of the twentieth century was much worse than anything Galton would have envisioned.”)

Fortunately, resistance is mounting. Important books have been published, like Michael Walsh’s edited volume Against the Great Reset, Alex Jones’ The Great Reset: And the War for the World, and Marc Morano’s The Great Reset: Global Elites and the Permanent Lockdown (all highly recommended), that are eloquently and passionately sounding the alarm. So-called “populist revolts” in countries like France, Italy, and Sweden, (the latter two having elected new conservative administrations), as well as the MAGA movement in the U.S., are challenging a powerful conspiracy — not a conspiracy theory but a conspiracy fact — that seeks to destabilize the world order, uproot the foundations of long-standing usages and traditions, collapse the economic basis of the West and, in short, build back worse.

When I think about the speech of Y.Harari and E.Musk, it seems that the world will be like the movie “The Congress (2013)” in the near future.

Palmer Luckey Made a VR Headset That Kills the User If They Die in the Game
https://www.vice.com/en/article/dy7kbq/palmer-luckey-made-a-vr-headset-that-kills-the-user-if-they-die-in-the-game