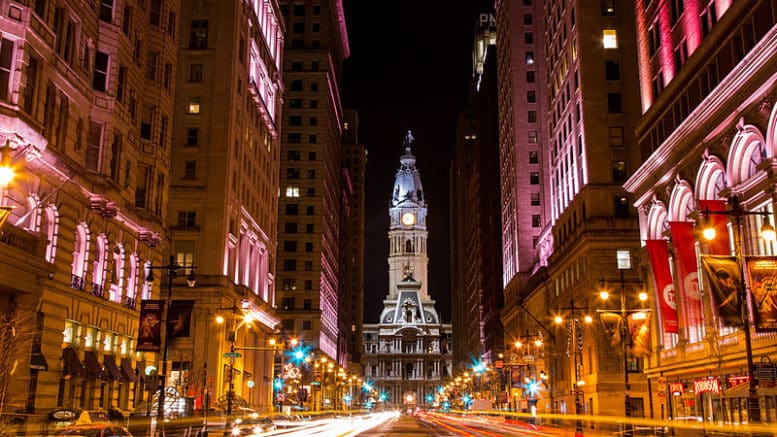 All 100,000 of Philadelphia’s streetlights will be replaced with wifi-equipped poles capable of total surveillance. It will be mostly financed by energy savings of LEDs over high-pressure sodium bulbs.

Buried at the bottom of this story is the following paragraph:

“The switchover to a smart LED lighting system controlled through a wireless mesh network also opens the possibility that the devices could provide more than illumination, but an interconnected system of security cameras, air-quality monitors, traffic and pedestrian counters, or acoustic gunshot detectors. “The more bells and whistles you put in there, the more it costs,” said Montanez.”

Philadelphia was the first city in America with public streetlights, thanks to Ben Franklin’s introduction of the oil candle in colonial times. But the city has been a little slower than others to switch its public streetlights to modern energy-saving LEDs, mostly because the conversion costs are high.

That’s about to change. The city’s Energy Office is preparing to issue a call for vendors who can convert all 100,000 city streetlights to LEDs in two to three years. The aim is to reduce the city’s carbon footprint and to shrink the government’s single largest energy expense — the city spends $15 million a year on streetlights. The new lamps might also provide more light in some crime-plagued neighborhoods in Philadelphia.

“The goal we’re looking at is a 40% reduction in cost,” said Richard Montanez, the deputy streets commissioner, who has advocated the conversion for about a decade. If the city can reduce costs by $6 million a year, the savings would likely cover the debt service for the project.

Converting the city’s streetlights to LEDs would cost $50 million to $80 million, said Adam Agalloco, the city’s energy manager, who is organizing a formal request for qualifications from potential vendors. The city likely would issue a bond for the project and repay the debt under Pennsylvania’s Guaranteed Energy Savings Act, which allows public entities to finance projects with the savings generated over current energy costs.

“We’re in a place where we can invest in LED street lighting and the project will pay for itself — at a minimum it will be financeable over 20 years, potentially sooner than that,” Agalloco said.

Not just about savings

City officials say the economics of switching to LEDs improved this year when Peco introduced a new tariff for “smart” street lighting at the request of Philadelphia and other municipal governments. The new street-lighting tariff, part of a larger rate package approved last year by the Pennsylvania Public Utility Commission, could provide a compelling incentive to local governments to invest in new wirelessly networked LED systems.

The city’s conversion plan is far more complicated than swapping in LED lamps for existing high-pressure sodium bulbs. The LED lights — light-emitting diodes — require new fixtures that are connected wirelessly and managed remotely, allowing operators to dim the lights after midnight to save money or to crank them up to full brightness to assist responders during a police or fire emergency.

The switchover to a smart LED lighting system controlled through a wireless mesh network also opens the possibility that the devices could provide more than illumination, but an interconnected system of security cameras, air-quality monitors, traffic and pedestrian counters, or acoustic gunshot detectors. “The more bells and whistles you put in there, the more it costs,” said Montanez.