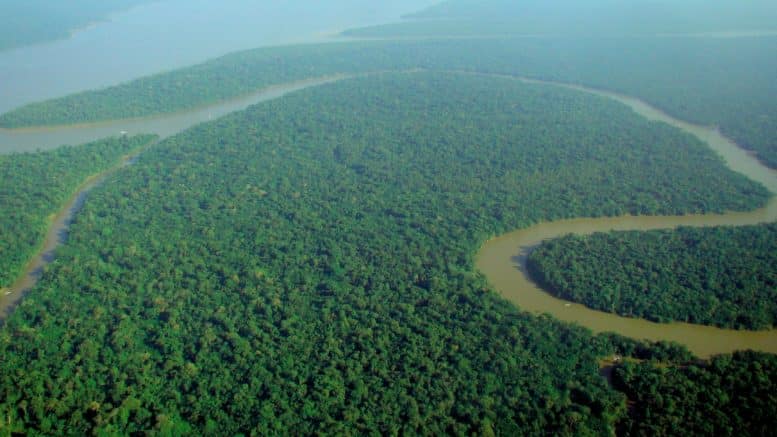 Please Share This Story!
PDF 📄
The global elite (via Foreign Policy Magazine) are floating a dangerous narrative: first, by suggesting the possibility that radical leftist Gavin Newsom could be a future President and second, that the U.S. might lead a military action against Brazil to ‘save’ the Amazon rainforest from destruction.

As outrageous as it is, this editor has seen many such trial balloons over the years, and they serve to manipulate public perception while hinting at their actual future plans. When media demonizes a people, nation or idea to this extent, you can see their endgame.

This very dangerous rhetoric is radiated through the United Nations to create anger amongst climate activists throughout the world. ⁃ TN Editor

Aug. 5, 2025: In a televised address to the nation, U.S. President Gavin Newsom announced that he had given Brazil a one-week ultimatum to cease destructive deforestation activities in the Amazon rainforest. If Brazil did not comply, the president warned, he would order a naval blockade of Brazilian ports and airstrikes against critical Brazilian infrastructure. The president’s decision came in the aftermath of a new United Nations report cataloging the catastrophic global effects of continued rainforest destruction, which warned of a critical “tipping point” that, if reached, would trigger a rapid acceleration of global warming. Although China has stated that it would veto any U.N. Security Council resolution authorizing the use of force against Brazil, the president said that a large “coalition of concerned states” was prepared to support U.S. action. At the same time, Newsom said the United States and other countries were willing to negotiate a compensation package to mitigate the costs to Brazil for protecting the rainforest, but only if it first ceased its current efforts to accelerate development.

The above scenario is obviously far-fetched—at least I think it is—but how far would you go to prevent irreversible environmental damage? In particular, do states have the right—or even the obligation—to intervene in a foreign country in order to prevent it from causing irreversible and possibly catastrophic harm to the environment?

I raise this issue in light of the news that Brazilian President Jair Bolsonaro is accelerating development of the Amazon rainforest (60 percent of which is in Brazilian hands), thereby imperiling a critical global resource. As those of you with more respect for science than Bolsonaro know, the rainforest is both an important carbon sink and a critical temperature regulator, as well as a key source of fresh water. Deforestation has already damaged its ability to perform these crucial roles, and scientists in Brazilian estimate that increasingly warm and dry conditions could convert much of the forest to dry savanna, with potentially catastrophic effects. Last week, the pro-business, free market-oriented Economistmagazine’s cover story was “Deathwatch for the Amazon,” which frames the issue rather nicely. To restate my original question: What should (or must) the international community do to prevent a misguided Brazilian president (or political leaders in other countries) from taking actions that could harm all of us?

This is where it gets tricky. State sovereignty is a critical element of the current international system; with certain exceptions, national governments are free to do whatever they want inside their own borders. Even so, the hard shell of sovereignty has never been absolute, and various forces have been chipping away at it for a long time. States can be sanctioned for violating international law (e.g., by defying U.N. Security Council resolutions), and international law authorizes countries to go to war for self-defense or when the Security Council authorizes military action. It’s even legal to attack another country’s territory preemptively, provided there is a well-founded basis for believing it was about to attack you first.

More controversially, the “responsibility to protect” doctrine sought to legitimate humanitarian intervention in foreign powers when the local government was unable or unwilling to protect its own people. And as a practical matter, states routinely accept infringements on their own sovereignty in order to facilitate beneficial forms of international cooperation.

When push comes to shove, however, most states resent and resist external efforts to get them to change what they are doing inside their own borders. And even though destroying the Amazon rainforest presents a clear and obvious threat to many other countries, telling Brazil to stop and threatening to take action to deter, punish, or prevent it would be a whole new ballgame. And I don’t mean to single out Brazil: It would be an equally radical step to threaten the United States or China if they refused to stop emitting so many greenhouse gases.

It’s not as if world leaders haven’t recognized the seriousness of the problem. The U.N. long regarded environmental degradation as a “threat to international peace and security,” and the former European Union foreign-policy representative Javier Solana argued in 2008 that halting climate change “should be in the mainstream of EU foreign and security policies.” Scholars have already identified various ways the Security Council could act to prevent it. As the researchers Bruce Gilley and David Kinsella wrote a few years ago, “it is at least legally feasible that the Security Council could invoke its authority under Article 42, and use military force against states it deemed threats to international peace and security by virtue of their unwillingness or inability to curb destructive activities emanating from their territories.”

The question, therefore, is how far would the international community be willing to go in order to prevent, halt, or reverse actions that might cause immense and irreparable harm to the environment on which all humans depend? It might seem far-fetched to imagine states threatening military action to prevent this today, but it becomes more likely if worst-case estimates of our climate future turn out to be correct.

But here’s a cruel paradox: The countries that are most responsible for climate change are also the least susceptible to coercion, while most of the states that might conceivably be pressured into taking action aren’t significant sources of the underlying problem. The top five greenhouse gas emitters are China, the United States, India, Russia, and Japan—four of them are nuclear weapons states, and Japan is a formidable military power in its own right. Threatening any of them with sanctions isn’t likely to work, and threatening serious military action against them is completely unrealistic. Moreover, getting the Security Council to authorize the use of force against much weaker states is unlikely, because the permanent members wouldn’t want to establish this precedent and would almost certainly veto the proposal.

This is what makes the Brazilian case more interesting. Brazil happens to be in possession of a critical global resource—for purely historical reasons—and its destruction would harm many states if not the entire planet. Unlike Belize or Burundi, what Brazil does could have a big impact. But Brazil isn’t a true great power, and threatening it with either economic sanctions or even the use of force if it refused to protect the rainforest might be feasible. To be clear: I’m not recommending this course of action either now or in the future. I’m just pointing out that Brazil might be somewhat more vulnerable to pressure than some other states are.

One can also imagine other remedies for this problem. States could certainly threaten or impose unilateral trade sanctions against environmentally irresponsible states, and private citizens could always try to organize voluntary boycotts for similar reasons. Some states have taken steps in this direction, and it is easy to imagine such measures becoming more widespread as environmental problems multiply. Alternatively, states that happen to govern environmentally sensitive territory could be paid to preserve it, in the interest of all mankind. In effect, the international community would be subsidizing environmental protection on the part of those who happen to possess the means of doing something about it.

Since “the amazon” is not ours by any stretch of the imagination, invading Brazil to “save the amazon” doesn’t make any sense. It’s a surrealist idea if you think in “normal terms”. If someone is destroying the amazon, it’s not Brazilians, but its true owners – at least Japan, Germany and the US. Many years ago a friend of mine – who is completely outside the “conspiracy” world – told me how they (she and her boyfriend) were traveling by motorcycle in Amazonia and at some point they were stopped by the police and asked for their passports. Since they… Read more »