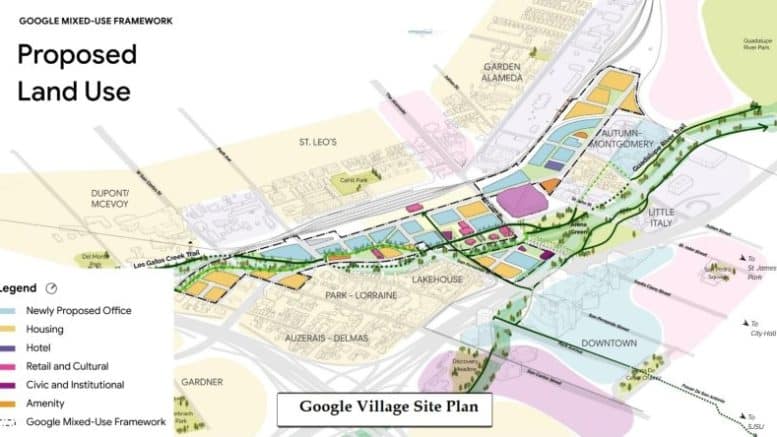 Please Share This Story!
PDF 📄
After stiff resistance from citizens and privacy advocates in Toronto over Quayside, Google has decided to replicate its city-from-scratch experiment in downtown San Jose, California. ⁃ TN Editor

Years after it began fueling speculation by buying up huge swaths of property near Diridon Station, Google has provided the first peek at what the search giant hopes will be a vibrant mixed-use community woven into the fabric of the city’s urban heart.

At a widely anticipated community meeting Thursday evening, the tech giant unveiled a design for a mile-long stretch of formerly industrial land west of Highway 87 that includes thousands of new homes, offices, public plazas, art, cultural space and at least one hotel. The proposal promises to transform a run-down section of the city and comes as a marked shift from the walled-off corporate tech campuses that have dominated the South Bay for decades.

Google chose this part of San Jose in large part because of Diridon Station, which in the coming years is set to become one of the largest transit hubs on the west coast — with BART, Caltrain, bus service and perhaps even high-speed rail all servicing the terminal.

But in Google’s vision, riders will emerge from the station not into the current drab expanse of flat parking lots but into a bustling plaza lined with new office buildings anchored by cafes and shops on the ground floor to draw people in. While the company has not yet released renderings of the project, the images released Thursday provide the clearest picture yet of what Google is imagining.

Across from the southwest corner of the SAP Center, Google wants to create some housing — an apparent nod to advocates who called for homes to be located near the station. Northwest of the Shark Tank, Google has plans for a hotel. That, in part, is meant to counter a major conversion of housing in the area into short-term rentals through something like Airbnb.

Alexa Arena, Google’s director of real estate development, likened Google’s vision to the company’s modern, pedestrian-friendly King’s Cross project in central London, adjacent to the famed St. Pancras train station that whisks riders across the English Channel to Paris and beyond. Both Google workers and San Jose residents alike, she said, want to emerge from the station directly into a vibrant city. And, she insisted, Google wants to build a space that retains a diverse, unique San Jose feel.

To the north, the company wants to preserve some industrial character, with space for artists to be creative. To the south, Google’s design focuses more on local retail and connecting with nature — creating and updating pathways near Los Gatos Creek. Housing and office space would be incorporated on both sides.

The space shouldn’t have “any hard edges,” Arena told this news organization, noting that while San Jose recently voted to allow much taller buildings near Diridon Station, Google doesn’t plan to build high in the sky everywhere. In some spots, Arena said, shorter structures might be more appealing than towers — near residential neighborhoods with single-family homes, for instance.

“They have designed a district that meets their office needs but that is going to feel like an extension of the downtown,” said Kim Walesh, the city’s director of economic development, “and like a very high-quality, regular urban area, and I think that must be a first.”

Overall, the company plans to create an estimated 6.5 million square feet of office space and 3,000 to 5,000 homes, well beyond what the city had anticipated for the area. Google also wants to set aside 500,000 square feet for retail, restaurants, culture, arts, education and other uses to help create an active place that would attract people at night and on weekends.

“San Jose has a serious housing crisis and also a serious jobs deficit,” Walesh said, “so I’m really excited about Google taking significant steps to address both of those twin challenges.”

The proposal also would create 15 acres of parks, plazas and green spaces — in many cases as ways to link parts of the transit village to the rest of the downtown as well as to nearby Los Gatos Creek and the Guadalupe River.

Google anticipates it could employ 20,000 to 25,000 people within the transit-oriented neighborhood.

“Here is an opportunity to be part of a city,” said Ricardo Benavidez, manager of community development with Google.

While the company is still in what San Jose’s transportation director, John Ristow, dubbed the “cartoon” phase, it plans to work with Heatherwick Studio, the British company Google turned to for its King’s Cross space and its tent-like Mountain View headquarters.

To head off lengthy legal battles, Google will ask the governor’s office to work through AB 900, a 2011 measure that sends California Environmental Quality Act challenges directly to appellate courts to be resolved in nine months. Such projects must be at least $100 million, pay construction workers prevailing wages and not make greenhouse gases worse. If Google is granted AB 900 permission, it will be a first for both the company and San Jose — and good news for Liccardo’s legacy.

Even before construction — which could stretch for more than a decade — begins, Google wants to convert the former Orchard Supply Hardware site near Highway 280 into job training space, where unions and others could help San Jose residents learn construction techniques and other skills to take advantage of job opportunities offered by the Google project.

“We need to start on job readiness today,” Arena said.