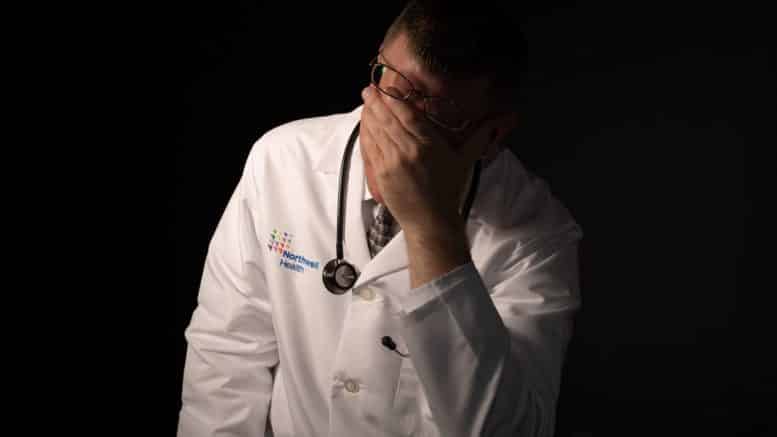 Please Share This Story!
PDF 📄
Data hungry Technocrats have fundamentally taken over the health care industry by mandating ‘Electronic Health Records’ and ‘Evidence-Based Medicine’. The outcome has ruined the American health care system and is driving physicians out of practice by the droves. ⁃ TN Editor

Physicians may be more stressed than ever — one recent survey found that half were thinking about hanging up their stethoscopes for good. New research continues to demonstrate the demise of doctors, with burnout levels jumping dramatically over just a three-year span.

According to researchers at the University of California, Riverside School of Medicine, physician burnout increased from 45.5% to 54.4% between 2011 and 2014. The researchers say doctors aren’t more depressed or exhausted by their home life, but rather at their jobs.

Drs. Andrew G. Alexander and Kenneth A. Ballou isolated three factors for physician burnout, according to their research:

“It should be a treat to care about another person, but I see that too many of our seasoned physicians are frustrated with medicine, and it rubs off onto the physicians in training,” Alexander says in a university release. “Doctors have a wonderful job, yet they are inundated with numerous extraneous burdens that collectively rob them of the joy of medicine.”

“These are hospital purchases of medical groups, rising drug prices, the Affordable Care Act, ‘pay for performance’ in which providers are offered financial incentives to improve quality and efficiency, and mandated electronic health records,” explains Alexander. “Doctors now spend more time with electronic health records than they do with patients. Electronic health records were pushed by the government at great expense and without regard to the effects upon patient or physician health. Go into any hospital and look for the nurses and the doctors. You will find them sitting in front of computers. They are not happy, and their patients are not healthier.”

The American Journal of Medicine

United States physicians were studied by Shanafelt et al in 2011, and again in 2014, regarding burnout and satisfaction with work–life balance.1 Physician burnout increased significantly, from 45.5% to 54.4%. Parallel studies of all US workers during the same period showed no changes.

There are several possible explanations for this. New physician members were added to the cohort between 2011 and 2014. It is conceivable new expectations could have changed the outcome. Since the internet-enabled smart-phone users born after 1982 had barely begun to graduate residency in 2014, however, it seems more than a stretch to blame yet another malady on “Millennials”.

The rates of physician suicide and depression remained stable from 2011 to 2014, whereas the “healthy work–life balance” portion of the Shanafelt study dropped from 48.5% to 40.9%. The definition of work–life balance has been variously misused, but in the most general sense it focuses on satisfaction with work and the ability to have a happy life away from work. The Maslach Burnout Inventory was used to measures personal accomplishment, emotional exhaustion, and depersonalization.2 Doctors are not depressed or less content at home, they are less happy at work.

Physician burnout is characterized by 1) a feeling of a lack of accomplishment; 2) feelings of cynicism; and 3) a loss of zeal, zest, and enthusiasm for work. Apart from the effects burnout has on individual physicians, there is evidence that relationships with patients and family also suffer. Although increased burnout has been found to be notably worse in primary care and emergency room physicians, it has also worsened in 18 of the 20 categories of specialist physicians sampled. When compared with the absence of worsening in the general US working population, and noting the spectrum of advancing earnings among the general US workforce compared with doctors in primary care, or higher earning Emergency Medicine doctors, or still higher earning subspecialists, we can conclude that higher physician earnings are neither a cure nor a cause of burnout. Something else is happening to our beloved profession.