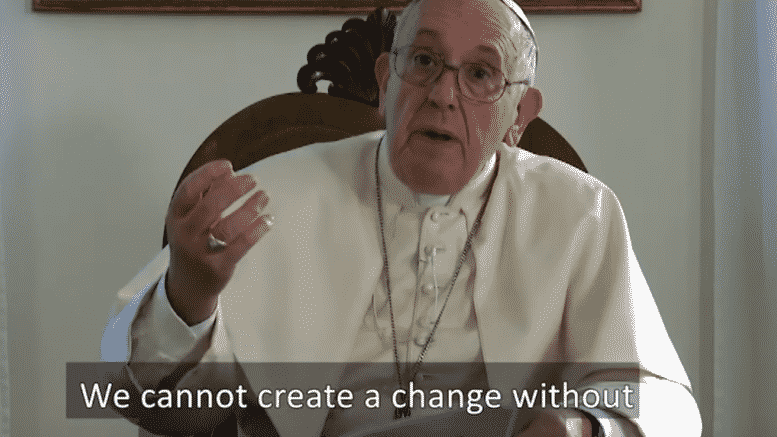 Please Share This Story!
PDF 📄
Pope Francis called on global leaders to join in on May 14, 2020 to sign a new Global Compact on Education that will lead to a ‘New Humanism’. Channeling Hillary Clintons book, It Take a Village, he wants to ‘educate’ all young people into becoming global citizens. ⁃ TN Editor

In a renewed and enthusiastic endorsement of globalism, Pope Francis has announced he is hosting an initiative for a “Global Pact” to create a “new humanism.”

The global event, set to take place at the Vatican on May 14, 2020, is themed Reinventing the Global Educational Alliance.

According to a Vatican statement issued on Thursday, Sept. 12, the Pope is inviting representatives of the main religions, international organizations and various humanitarian institutions, as well as key figures from the world of politics, economics and academia, and prominent athletes, scientists and sociologists to sign a “Global Pact on Education” so as to “hand on to younger generations a united and fraternal common home.”

“A global educational pact is needed to educate us in universal solidarity and a new humanism,” Francis said in a video message to launch the initiative.

A Vatican-backed website launched to promote the pact added: “Educating young people in fraternity, in learning to overcome divisions and conflicts, promote hospitality, justice and peace: Pope Francis has invited everyone who cares about the education of the young generation to sign a Global Pact, to create a global change of mentality through education.”

The Pope’s message on the ‘Global Pact’

In a strikingly secular message containing only one throw-away reference to the Lord, Pope Francis called on people to “capitalize on our best energies” and to be “proactive” in “opening education to a long-term vision unfettered by the status quo.”

“This,” he said, “will result in men and women who are open, responsible, prepared to listen, dialogue and reflect with others, and capable of weaving relationships with families, between generations, and with civil society, and thus to create a new humanism.”

Quoting Hillary Clinton’s favorite aphorism, “It takes a village to raise a child,” Pope Francis asserted the need to create an “educational village,” in which “all people, according to their respective roles, share the task of forming a network of open, human relationships.”

At a time when the right to homeschool and the right to a free choice of school are threatened, and when countries throughout the world level taxes to provide public schooling to which no Catholic parents could safely send their child, Pope Francis omitted any reference to the prerogatives of parents as the primary educators of their children.

Referencing the “Document on Human Fraternity and World Peace for Living Together,” which he signed with the Grand Imam of Al-Azhar in Abu Dhabi last February, Francis explained that, in this new global village, “the ground must be cleared of discrimination and fraternity must be allowed to flourish.”

Readers will recall that the Abu Dhabi document aroused controversy for stating that the “diversity of religions” is “willed by God.”

“In this kind of village,” the Pope also said an “alliance” must be forged “between the earth’s inhabitants and our ‘common home,’ which we are bound to care for and respect. An alliance that generates peace, justice and hospitality among all peoples of the human family, as well as dialogue between religions.”

Not everyone is convinced that peace can be achieved by promoting the Abu Dhabi document, however. Bishop Athanasius Schneider recently observed that “however noble such aims as ‘human fraternity’ and ‘world peace’ may be, they cannot be promoted at the cost of relativizing the truth of uniqueness of Jesus Christ and His Church.”

In his message, the Pope said that in order to reach these “global objectives,” as an “educating village” we must “have the courage to place the human person at the center” and to “train individuals who are ready to offer themselves in service of the community.”

He ended his message by inviting “everyone to work for this alliance and to be committed, individually and within our communities, to nurturing the dream of a humanism rooted in solidarity and responsive both to humanity’s aspirations and to God’s plan.”

Pope Francis has tasked the Vatican’s Congregation for Catholic Education with organizing the initiative. According to a website dedicated to the global pact, the Congregation oversees “216 thousand Catholic schools, attended by over 60 million pupils and 1,750 Catholic universities, with over 11 million students.”

In explanatory note accompanying the Pope’s message, the Congregation said that the May 14 global pact initiative seeks to involve “international organizations” and the “great ones of the earth” in helping to “heal the fracture between man and the Absolute” and the separation between “reality and the transcendent.”

It also aims to heal the “horizontal fracture” between men of difficult cultures, religions and backgrounds. And it intends to heal the “fracture between man, society, nature and the environment” in the face of an “urgent need” to create an “ecological citizenship” based on sustainability and an “austere responsibility.”

“The objectives set for the next few decades aim to set up training models that take into account a constantly increasing population, diminishing resources and the fact that climate change places everyone before a serious responsibility: that of developing our planet in a sustainable way, with an eye to the needs of future generations,” the Congregation said.

“The choice of education as a ground on which to make a global pact is a priority topic in the horizon of current and future scenarios,” it added.

Conferences and events will be held throughout the coming year to prepare for the May 14 signing of the “Global Pact” on education.

In May 2019, Pope Francis made a strong push for globalism, calling for a supranational, legally constituted body to enforce United Nations Sustainable Development Goals and to implement “climate change” policies.

More recently, during an inflight press conference on his return from a seven-day apostolic visit to Africa, Francis said our “duty” is to “obey international institutions,” such as the United Nations and the European Union.

THE False prophet. Not one among many but the “One” who will cause the world to worship Satan. He is gathering the “elect” for the 7 year judgment and the final conflict. Does he know his role? He certainly does.

OMG, no sane person would ever listen to the Vatican. Anything that comes out of that dark hole is ALWAYS about the Vatican’s monetary interests and that of their bank. What a load of crap.

Oh yeah, the attendees have to sign a document of declaration. And the word Humanism which was called heresy just a few decades ago is now the Pope’s go-to word for a secular future? Geez.

Just another whore Pope sucking up to the Satan driven politicians of the world.

Especially so if he’s following that Satanist Hilery Clinton and Co.😡😠👺

What, what!! This article says “Pope Francis omitted any reference to the prerogatives of parents as the primary educators of their children.” Read it. Pope Francis did not do that. He said… “It is clear in this context how the family as the fundamental nucleus of society and humanity is essential in bringing children into the world, raising them, educating them, and providing them with solid moral formation and domestic security. To attack the institution of the family, to regard it with contempt or to doubt its important role, is one of the most threatening evils of our era.” See… Read more »

The document you reference was a joint declaration of Pope Francis AND The Grand Imam of Al-Azhar
Ahmad Al-Tayyeb, a Muslim. The statement is titled, “APOSTOLIC JOURNEY OF HIS HOLINESS POPE FRANCIS
TO THE UNITED ARAB EMIRATES”. It was not written exclusively by Pope Francis.

I am one of the abused children who survived the filthy Roman catholic terrorist nuns upbringing in Ireland. 😢 Everything was for money and a blind eye turned on the torture sexusl abuse and murder of women and children put imto their ‘care” in their slave trade laundrys and industrial ‘schools’. They could, and did, do anything and get away with it. The tax-payers were made to pay for it, never them, and they still run all the schools and hospitals in Ireland. Check out the film ‘The Magdalen Sisters’ for information. 😨😱

WE all agree that papa Francesco is the false prophet, do we not? But what about the 1st beast, or “man of sin”? We’ve been told all our lives he would be some great charismatic politician. Sorry, not the case. So, what type of people are already worshipped as idols and gods by billions the world over, and have been for decades? Can you say Hollywood celebrities? I knew you could. Hence- the triple six hand sign that all of the movie stars, pop idols, etc. are flashing for the cameras these days. You think they’re doing it for kicks?… Read more »

Don’t get me wrong, folks. I have nothing against this guy(in his present state). He’s a good person, a philanthropist and what not. And I must admit , I have been a big fan of his since the beginning of his career. Seen all his movies more than once. But what was revealed to me recently about all this is meant to be shared with others. Don’t be deceived, brethren.

Together we stand
Reply to  William Baker

Holly wood, the wood Witches’ brooms and Warlocks’ wands are made of. It’s all satanic.

Satan’s Church. Sits on a throne of GOLD while women and children suffer.