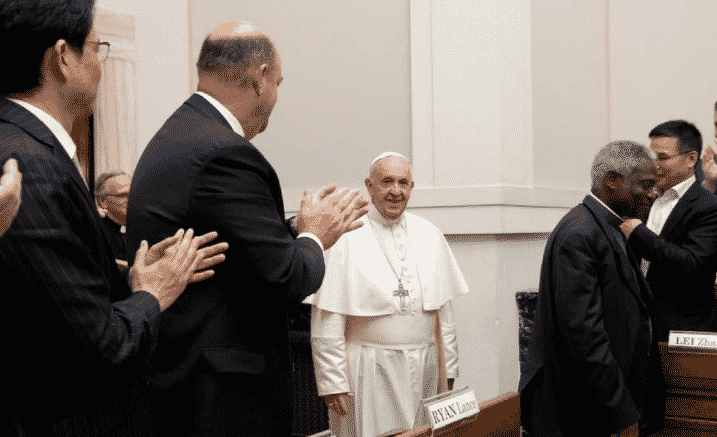 Please Share This Story!
PDF 📄
Pope Francis is thoroughly deceived on the green agenda of Sustainable Development and global warming. He says “doomsday predictions can no longer be dismissed.” ⁃ TN Editor

Pope Francis said on Friday that carbon pricing is “essential” to stem global warming – his clearest statement yet in support of penalising polluters – and appealed to climate change deniers to listen to science.

In an address to energy executives at the end of a two-day meeting, he also called for “open, transparent, science-based and standardised” reporting of climate risk and a “radical energy transition” away from carbon to save the planet.

Carbon pricing, via taxes or emissions trading schemes, is used by many governments to make energy consumers pay for the costs of using the fossil fuels that contribute to global warming, and to spur investment in low-carbon technology.

The Vatican said attendees of the closed-door meeting at its Academy of Sciences, a follow-up to one a year ago, included the CEOs of Royal Dutch Shell, Eni, BP, Repsol, Conoco Phillips, Chevron, ExxonMobil, and executives of investment funds.

“Collectively, these leaders will influence the planet’s future, perhaps more than any in the world,” said Father John Jenkins, president of the U.S. University of Notre Dame, which organised the meeting.

A small group of demonstrators gathered outside a Vatican gate. One held a sign reading “Dear Oil CEOs – Think of Your Children”.

Francis, who has made many calls for environmental protection and has clashed over climate change with leaders such as U.S. President Donald Trump, said the ecological crisis “threatens the very future of the human family”.

He criticised those who, like Trump, doubt the science that shows human activity is causing the earth to heat up.

“For too long we have collectively failed to listen to the fruits of scientific analysis, and doomsday predictions can no longer be met with irony or disdain,” Francis said. Discussion of climate change and energy transition must be rooted in “the best scientific research available today”.

Trump, asked in an interview if he accepted climate science, said last week: “I believe there’s a change in weather, and I think it changes both ways.”

He has said the United States will withdraw from the Paris accord, a 2016 global agreement to fight climate change.

Francis, who wrote an encyclical – a significant document on Church teaching – in 2015 on protection of the environment, and strongly supports the Paris accord, said time was running out to meet its goals.

“Faced with a climate emergency, we must take action accordingly, in order to avoid perpetrating a brutal act of injustice towards the poor and future generations,” he said.

“We do not have the luxury of waiting for others to step forward, or of prioritising short-term economic benefits.”

The Pope would perhaps be best sticking to matters of morality, & sorting out his child-abusing clergy, high & low. Scientifically he seems to have been extremely badly advised: he has been taken in by the fake news propaganda. He could do worse than read climatologist Dr. Tim Ball’s great little handbook, only 121 pages, reveals all, names names: Human Caused Global Warming The Biggest Deception In History A must-read. http://www.drtimball.ca And: Climate Change The Facts 2017 22 chapters by quality authors, edited by Jennifer Marohasy. And: Heaven And Earth Global Warming: The Missing Science by Geology Prof. Ian Plimer.… Read more »

It would be best if people would read the Bible for themselves. If your house was on fire would you no want to know about it??? The Pope knows nothing about morality, he is a hypocrite! It was the Roman Church that murdered people during the dark ages 600-1517, and pillaged. During the reformation people were tortured and murdered for printing Bibles. Seems to me you might want to read what you were forbidden to read. And no the Bible did not come from them. The Apostles who were Jews wrote New Testament Scripture, as well as preserved the Old… Read more »

Nope. The Pope is not being “taken in”. He is “IN cahoots”, as always, that’s the only definitive statement one can make in truth about him, his predecessors, the version of God that he peddles as the ‘one and only’ belief, his corporation’s (mis-labeled as a church) 2000-yrs of theft, hate, whoring, suppression, murder, rape, pedophilia, torture, assassination and general preying on humanity for control of this planet. PERIOD. The Jesuits were not and are still not Italy’s soccer team. None of these statements are theory; it’s blatant, factual history. Anyone who listens to him or his corporate BS is… Read more »

This pope has a common mission with Islam. That’s really not surprising.

Thanks for the link. Very interesting info.