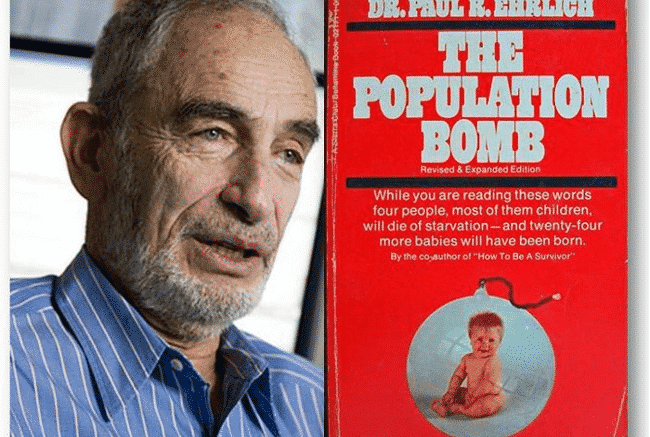 Please Share This Story!
PDF 📄
Mass extinction events over hundreds of millions of years are claimed to have been caused by natural events. Of course there is zero proof of this). Technocrats claim that today’s mass extinction will instead be caused by man. Not one of Ehrlich’s 1968 predictions has materialized but he has never changed his rhetoric, despite the fact that we are headed straight into a demographic winter.

As you listen to 60 Minutes pimp for Ehrlich’s civilization extinction theory, remember that they are all Technocrats adhering to the doctrine of total resource control and allocation. Those very Technocrats who claim they are only trying to save the world are the very ones who are destroying it in the first place. ⁃ TN Editor

The next several decades “will be the end of the kind of civilization we’re used to,” according to Stanford University biologist Paul Ehrlich whose long-held apocalyptic prophecy was recently featured on the most-watched newsmagazine on TV.

When told by CBS correspondent Scott Pelley that there is currently “no political will” to follow any of his recommendations, Ehrlich admitted that was the case and warned of the repercussions for such environmental apathy.

“I know there’s no political will to do any of the things that I’m concerned with, which is exactly why I and the vast majority of my colleagues think we’ve had it — that the next few decades will be the end of the kind of civilization we’re used to,” he said.

Ehrlich also warned that humanity is “not sustainable to maintain our lifestyle — yours and mine,” claiming that “for the entire planet you’d need five more Earths [and it’s] not clear where they’re going to come from.”

The program continued by warning of a “sixth mass extinction” attributed to “humanity’s feasting on resources” which has “tripled” over the last 50 years.

“We’re already consuming 175% of what the Earth can regenerate,” Pelley stated.

“And consider half of humanity — about four billion — live on less than $10 a day,” he added. “They aspire to cars, air conditioning, and a rich diet….”

Ehrlich — who has defended mass sterilization, sex-selective abortion, and infanticide — is the author of the infamous 1968 eco-doom bestseller The Population Bomb, which generated mass hysteria over the future of the world and the earth’s ability to sustain human life, yet was demonstrably proved wrong.

In the book, he prophesied that hundreds of millions would starve to death in the 1970s (65 million of whom would be Americans); that already-overpopulated India was doomed; and that odds were fair that “England will not exist in the year 2000.”

Ehrlich concluded that “sometime in the next 15 years, the end will come,” as “an utter breakdown of the capacity of the planet to support humanity” occurs.

He has also argued that allowing women to have as many children as they desire is similar to letting people “throw as much of their garbage into their neighbor’s backyard as they want.”

Humanity occupies about 14% of the Earth’s surface. The sky is not falling…

People like this Erlich character, are first of all characters; placed in our awareness to make us hear the same warnings hundreds of times, so that we ignore them eventually. At the time that this fruitbsket had made these “predictions” the world had never experienced the entire planet wearing masks for a faked event that was executed to create a real event/crisis. That has only happened once, and “htey” owe it all to technology, and the people who mined the precious metals for those devices during and after the Soviet Union, in Siberia mostly. Now, some of what he says… Read more »

Not that Herr Ehrlich is smart enough, but Nobel Prize winning physicist Richard Feyman was: ““In general we look for a new law by the following process. First we guess it. Then we compute the consequences of the guess to see what would be implied if this law that we guessed is right. Then we compare the result of the computation to nature, with experiment or experience, compare it directly with observation, to see if it works. If it disagrees with experiment it is wrong. In that simple statement is the key to science. It does not make any difference… Read more »

Watch this video and you’ll discover that some guy went to the trouble of inventing Baby Pods to grow babies in bottles in baby farms precisely because of global DEPOPULATION that was happening “naturally” before the mRNA shots that also are making vast populations infertile.
https://www.rebelnews.com/baby_pods_and_gene_editing_are_you_ready_for_the_future

[…] “Population Bomb” Paul Ehrlich Blathers On About The “End Of Civilization” […]