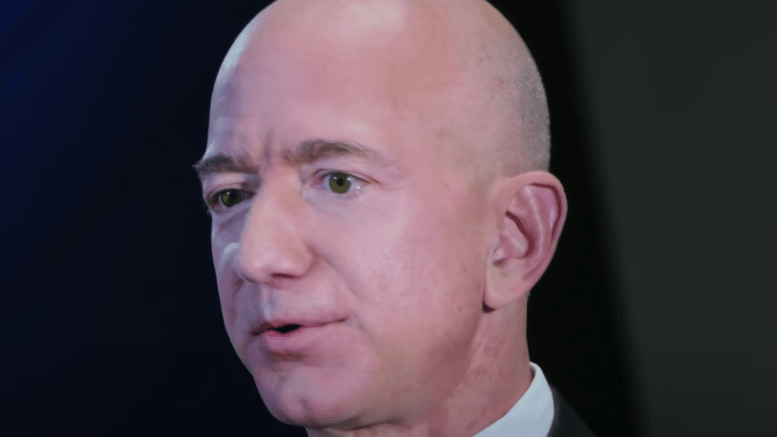 Please Share This Story!
PDF 📄
Don’t worry, it won’t actually happen, but billionaire Technocrats might well figure out how to live an extra dozen years or so. Those who understand the crackpot goals of Transhumanists are starting to take them seriously enough to ask some penetrating questions. What IF? If Jeff Bezos were to rise to godhood, he might well ditch Christmas and all other holidays for Prime Day. All hail lord Bezos. ⁃ TN Editor

Let’s be clear: modern science has done a lot of incredible things for human health. We live way longer than we used to, and quality of life is remaining far better, for far longer, than at any other point in history.

But there are a lot of wealthy people out there who don’t just want to live longer. They want to live forever, and they’re using their deep pockets to try to make it happen. In fact, Wired just declared that anti-aging research in 2023 could “kickstart the greatest revolution in medicine since the discovery of antibiotics.”

Could all that hype fall short? Sure, and it likely will. But it’s also possible that the quest for immortality could mark a grim new inflection point in the history of wealth.

That’s not just because it might mean that humanity will simply have to exist with the glare from an immortal Jeff Bezos’ glistening scalp for eternity, but because such technology might mean that people like Bezos, whose money equals a whole lot of power, would be able to continue compounding that wealth and power for, well, forever.

“Suppose, for example, we had a kind of vaccine for the pandemic of age,” Christopher Wareham, a bioethicist at Utrecht University who studies the ethics of aging, told The Financial Times. “This is going to potentially exacerbate all the kinds of existing inequalities that we have… The longer you’re around, the more your wealth compounds, and the wealthier you are, the more political influence you have.”

It’s a bone-chilling hypothesis, to say the least. Time, of course, is the central reason why anything really changes, politics included. Old leaders and belief systems die, new citizens with fresh ideas are born; in Wareham’s dystopian postulation, dictators and autocrats, as well as their donors, would additionally flock to the still-mythic technological fountain of youth.

And seeing as how neither wealth nor power, political or otherwise, are historically something that folks are too keen to share, it’s not exactly outlandish to assume that the already-rich makers of such a miracle drug or device might employ some hefty gatekeeping efforts. (Fascinatingly, billionaire SpaceX founder and hopeful Mars colonizer Elon Musk is very much opposed to immortality tech on grounds that leaders should definitely die at some point.)

That being said, some in the field are grappling with these issues, at least in principle. Mehmood Khan, for example, chief executive of longevity nonprofit Hevolution Foundation, told the FT that his organization is only funding products that can be “democratized.”

“If this is going to be a gazillion dollars’ worth of treatment for a handful of people,” he told the outlet, “it is of no interest.”

Elsewhere, the Bezos-funded Altos Labs, founded with the intention of materializing “cellular rejuvenation programming” to “reverse” disease and injury, says that it’s committed to helping as many people as possible.

But of course, as anyone of these organizations has yet to crack the code on immortality, or even an added twenty years to the human lifespan, these are just promises. But any breakthrough would be a financial jackpot in its own rite, and across the board, when that much money — and again, that much power —  are involved, promises are easily broken.

Anyway. See you in MetaHeaven, where we sacrifice our data to our meat-smoking Lord Zucko in exchange for eternal algorithmic life. Our only holiday is Prime Day, established globally after The Great Merge, and Peter Thiel may or may not be somewhere on post-apocolypse Earth wearing a cape, avoiding garlic, and sitting on a massive pile of gold coins in a bunker with Bezos and the Kardashians. Catch you on the other side of mortality!

‘EXPERTS’ (how I HATE that word!!!!!!!!!!!) must be complete MORONS to even pose the question. It’s is BIOLOGICALLY IMPOSSIBLE!! There is only ONE way to become Immortal…….and those that are EVIL are out of the running!
And those of us who ARE HUMAN, can only become Immortal NOT in our Human Form and in this Dimension (here on Earth).

Look at him. You can tell that he has corrupted genetic material, just like all the beasts and fowls in the earth. The LORD GOD won’t let them survive. He promised vengeance for those they led to destruction. Hide under the ground all you want. Remember the “serpent” gets you in the “heel.”

On a Higher Self level, they’re already immortal, and since they’re mostly reincarnates, they will incarnate in another body (with the same persona) to gather more experiencves after the death of the current body. The belief that ‘you are your body’ is regressive and incorrect, but society generally does not realize this since it requires a more advanced incarnational perspective, and it is not part of the general social narrative. The movie Jupiter Ascending shows an example of a sequential recarnational space society who would prefer to “live 50,000 years in the same body’. If they only knew.

Advance incarnational perspective? That’s just a way of justifying the fact that 99+% of the population are biological robots. For most (the super-duper-pooper majority), this IS all they have. I wouldn’t doubt that “they” incarnate manifold times (in fact, I’ve been saying this to various uninterested parties for almost two decades) in order to use “their” acquired knowledge again and again so as to stay ahead of those who are only here for “their” manipulation; in order to wrest control of the subject’s consciousness/freewill, which is ALL any of us really possess in this version of hell. But what would… Read more »

It is also true that the sequential reincarnates are grounded in technocratic habit, gained from previous incarnational narratives, and they are stuck in material reductionism.

Immortality in the current body is a myth. This body is temporary.  Once the physical body dies, what you did while in that body determines the fate of the soul. ALL of mans righteousness is as dirty rags unto our Maker- the GOD of Heaven and earth. There is NOTHING that ANYONE can do to SAVE a life. This time on earth is NOT your “life”. Your life truly begins when this physical body dies. You, your soul, will either go to Hell for eternity or you, your soul, will go to heaven for eternity. To have your life SAVED… Read more »

“And in those days shall men seek death, and shall not find it; and shall desire to die, and death shall flee from them.”

They will obtain immortality….for a while, but then they will have nowhere to hide from judgement, one should be careful of what one wishes. One can only imagine, what they will do to obtain this forbidden fruit, what price will these wealthy men pay to partake of it.

This author is a complete loon. Look at how people live now. Go to a doctor and get a pill. Go to the food store and buy poison laced “food”. People don’t live better or longer now. I don’t care what statistics say. Statistics are IMPOSSIBLE to validate; what, because someone tells you their “methodology”? Yeah, and you saw them go through thousands of cases and find that people live longer now? No. You didn’t. Go to any graveyard and take a look at the multitudes of people who died in their eighties and nineties in the 1800s! And take… Read more »

Even **I** am not dumb enough to fall for that old gambit, “surely you will not die.” But I guess if you are an evil genius zillionaire, you can still fall for drinking the Edenic Flavour Aid (it was that, not KoolAid, BTW)