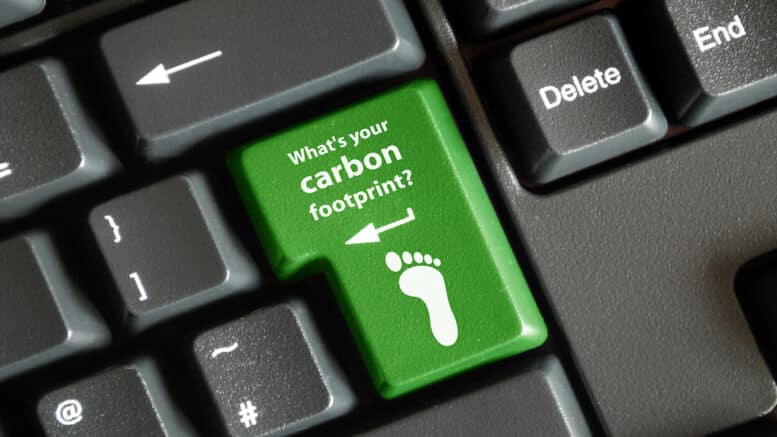 Please Share This Story!
PDF 📄
Control over energy has been a core tenet of Technocracy since its inception in 1932 at Columbia University. Energy is the “accounting system” for Technocracy, the oil that lubricates the resource-based economic system controlled exclusively by Technocrats. ⁃ TN Editor

No, there won’t be any escape.

Fully expect your future carbon footprints to be traced to a crime scene subject to “climate and energy justice” violations in the high tribunal of sustainability.

Such sins will include ownership and operation of an internal combustion vehicle, tampering with regulated upper or lower thermostat setting limits, and/or excessive electricity consumption based upon your maximum household square foot per occupancy allowances.

Quite simply, because America’s recently controlling political party has already initiated a fast track train wreck agenda to shut down and replace 80 percent of abundant and reliable hydrocarbon energy by growing the five percent currently provided by anemic, intermittent wind and solar electricity.

On top of this, the plan will vastly increase electricity demand and costs by phasing out most petroleum-fueled vehicles in favor of heavy taxpayer and consumer-subsidized plug-in models.

And you can bet your last incandescent lightbulb that they’re very serious.

On his first day in the oval office, President Biden capped off the Keystone XL pipeline at the Canadian border along with about 11,000 jobs and 830,000 barrels of oil per day it would have delivered, which must now be transported by more expensive rail and trucks.

As part of his $2 trillion “Equitable Clean Energy Future” agenda, President Biden has pledged to recommit America to the 2015 Paris Climate Agreement: eliminating carbon emissions from electricity by 2035, and shifting from oil, natural gas, and coal to achieve “net-zero carbon” emissions by 2050.

In short, the Biden agenda will terminate an energy resource that has stimulated over $200 billion of investment in new factories, generated millions of jobs, produced vital federal and state revenues, reduced the trade deficit by several hundred billion dollars, and expanded America’s policy flexibility and influence regarding foreign adversaries and allies alike.

China and India which have represented 80% of the emission increases and are not bound to the pact, are dramatically ramping up coal and oil development.

Meanwhile, other executive actions will cut back U.S. oil and gas production, which has recently made our country energy independent by canceling new oil and gas leases on public lands and waters.

It is not explained how to recharge all those added plug-ins at night when the sun is hidden, and the wind isn’t blowing.

Former Michigan Governor Jennifer Granholm, Joe Biden’s selection for Energy secretary, will be charged with the responsibility to make good on his election promise to help build 550,000 electric vehicle charging stations as part of his plan to “fight climate change,” which has been occurring since the time our planet first had an atmosphere.

So, what exactly comprises “environmental justice?

One sweeping presidential directive calls for stronger action to protect public health and the environment and hold polluters accountable, including those who “disproportionately harm communities of color and low-income communities.”

And who can really argue with that? No one wants air, land, or water “pollution,” which actually has nothing to do with responsible, clean use of hydrocarbon fuels or production of atmospheric CO2 (natural plant food).

Less than 24 hours after his inauguration, Biden also welcomed Northeastern law and racial justice professor Shalanda Baker into his administration as deputy director for “energy justice” within the Department of Energy.

According to the nonprofit Initiative for Energy Justice, energy justice, much like environmental justice, refers to “the goal of achieving equity in both the social and economic participation in the energy system, while also remediating social, economic, and health burdens on those disproportionately harmed by the energy system.”

Again, who would possibly wish to deny energy justice to anyone, most particularly for disproportionately disadvantaged low-income populations of all races? It seems that the greatest justice will be served by lowering energy costs and raising abundance for everyone…the direct opposite of what the Biden agenda portends.

A harbinger of coming events occurred when power blackouts rolled across California cities and towns during a 2020 heatwave due to the removal of nuclear and fossil-fueled plants from the grid.

California already leads the nation with the least reliable power system, and the greatest number of annual outages…4,297, were recorded between 2008 and 2017. And conditions will only become far worse as the state now requires that all new homes be nearly entirely electric. More than 30 cities, including San Francisco, have already enacted bans on new gas appliance hookups. California plans to outlaw gasoline and diesel cars eventually.

There is no reason for anyone in energy-rich America to be deprived of affordable energy in order to “save the planet” from an imperceptible 0.06o Celsius increase in warming based upon UN Intergovernmental Panel on Climate Change (IPCC) hypothetical computer models that are directly observed to run two to three times too hot.

Nor are either solar or wind power environmentally “cleaner” than hydrocarbons when the mining and toxic rare earth materials that go into making them are accounted for.

Artificial energy shortages premised upon environmental and energy justice will lead only to justifications for rationing to redistribute energy poverty more equitably.

Larry Bell is an endowed professor of space architecture at the University of Houston where he founded the Sasakawa International Center for Space Architecture (SICSA) and the graduate program in space architecture. He is the author of several books, including “Reinventing Ourselves: How Technology is Rapidly and Radically Transforming Humanity” (2019), “Thinking Whole: Rejecting Half-Witted Left & Right Brain Limitations” (2018), “Reflections on Oceans and Puddles: One Hundred Reasons to be Enthusiastic, Grateful and Hopeful” (2017), “Cosmic Musings: Contemplating Life Beyond Self” (2016), and “Scared Witless: Prophets and Profits of Climate Doom” (2015). He is currently working on a new book with Buzz Aldrin, “Beyond Footprints and Flagpoles.”

Climate sect and corona sect, the two sides of the same coin. Sometimes I curse the day I realized the climate fraud. Since then, the threat has increased in line with my knowledge of it, but without my best efforts to counter it have done any good. On the contrary, these psychopaths are turning up more and more. When-Others-Plan-YOUR-Death — Is-That-Murder – https://odysee.com/@StopTheCrime:d/When-Others-Plan-YOUR-Death—Is-That-Murder:a “The climate sect and the coron sect are among the greatest enemies of mankind, and one would think that as extremely dangerous terrorist groups and members of global organized crime they are actually treated the same way.… Read more »

Every household should have a Kelly Kettle. (Use them outside, not inside!) Also know about vacuum flask cooking. And slow cooking by insulating a cooking pot several hours. Learn these things now, folks, before you need them to survive. Don’t get a “smart meter” or put your house on “hive” or similar — it enables your thermostat to be controlled –not by you– if there’s energy shortages. Or they just think you’re using too much. “Smart meters” don’t save you money; in the UK you have to pay for them, and one researcher found that it will cost a homeowner… Read more »

Don’t get a “smart meter” installed on your house. It doesn’t save you money; it does “track” and report your energy use, and enables the electric company to set your thermostat etc without your input if there’s an energy shortage.