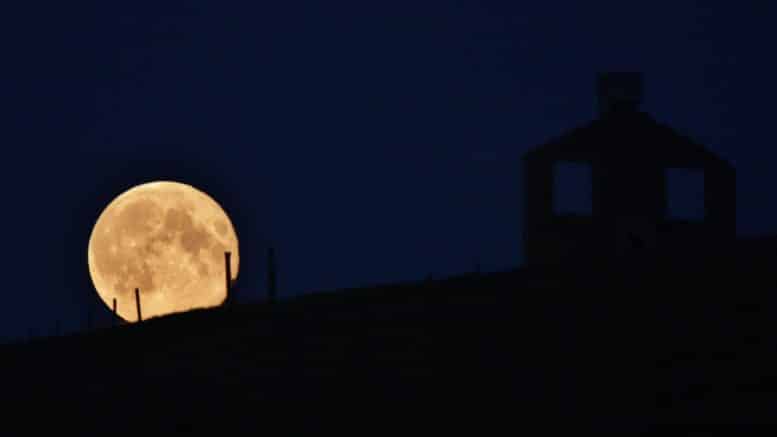 Please Share This Story!
PDF 📄
Technocrat scientists in China are extending their science of social engineering to creating an artificial moon that potentially will replace street lights in one large city. The proposed stationary moon will reflect light from the sun to a 50-mile wide swath on earth. (See second story below first)  ⁃ TN Editor

Moonlit skies over the Chinese city of Chengdu may soon get a boost from a second moon.

The illuminated orb is intended to complement the light of Earth’s existing moon, and will be eight times brighter than the natural satellite, Wu Chunfeng, chairman of Chengdu Aerospace Science and Technology Microelectronics System Research Institute Co. Ltd. (CASC) — the primary contractor for the Chinese space program — told PDO.

In fact, light from the artificial moon is expected to save the city money by doing away with the need for streetlights, Chunfeng added. The new moon will be capable of illuminating an area of up to 50 miles (80 kilometers) in diameter, according to PDO.

Though the human-made moon will light up only Chengdu, the glowing ball will be visible across China and even overseas, Asia Times reported. The real moon, of course, can usually be seen from anywhere on Earth. But little is known about the height, size and true brightness of the proposed artificial moon — all of which are factors that could affect its visibility to distant observers.

It is also unknown if the project has secured official support from the city of Chengdu or the federal government, The Guardian reported.

This isn’t the first time that a country has tried to outshine the moon. A similar project was unveiled by Russia in the 1990s, with the launch of a solar reflecting system — a “space mirror” — intended to produce light “equivalent to three to five full moons” covering an area approximately 3 miles (5 kilometers) in diameter, the New York Times reported in 1993.

Another Russian attempt to launc

h a space mirror in 1999 fizzled before it got off the ground, according to The Guardian.

Regarding concerns about the Chinese artificial moon interfering with astronomical observations or disrupting animals that are active at night, Kang Weimin, the director of the Institute of Optics of the Harbin Institute of Technology in China, said that the light would amount to only a “dusk-like glow,” PDO reported.

However, research has shown that many animals are highly sensitive to the light and phases of the moon. For example, nocturnal eagle owls communicate with each other through the display of white throat feathers, and scientists have found this activity increases during the full moon, when moonlight is brightest.

And in Australia’s Great Barrier Reef, hundreds of coral species simultaneously release their eggs and sperm in an annual mass spawning event linked to the level of moonlight.

Chengdu plans to launch in 2020 a mirror satellite to create dusk lighting at night.The satellite will appear to be 8 times a full moon. They believe this will remove the need for most street lighting which will save power and reduce air pollution. They dusk level of lighting may not disturb animals or plants.

I believe lighting up a megacity at night is only step one. China has the most solar farms in the world. Large 5-gigawatt solar farms have the area of a megacity. China is preparing to triple the capital value of its solar farms. A constellation of $37 billion of solar mirror satellites will boost several large solar farms and would twice the power and efficiency of the Three Gorges Dam.

This would clear a path to China having 70-80% baseload energy from solar. This would mean significant chunks of China perhaps a few hundred massive solar farms would have constant light. People could then wring their hands about the nocturnal animals. But full realization of this plan would enable China to phase out coal power with zero emission power.

So will environmentalists get behind this plan? Has the panic over the IPCC climate report been real or not? Do they really want to have massive reduction of fossil fuel or not? The affordable and scalable paths to massive fossil fuel reduction involve converting solar to constant power production with huge mirror satellite constellations and factory mass produced nuclear power.

Do people think this is not where China is going with this? Although lighting up a megacity at night is a big and bold move. It does not move the big energy or environment needle for China (or the world). I think it is pretty clear the end game is lighting up the big solar farms. China has the most and biggest solar farms and the most solar power in the world. China has to get rid of the coal.

Upward of 70 percent of China’s utility-scale wind and solar farms have been built in the country’s sparsely populated northern provinces.

By 2020, China is planning to build 16 new ultra-high-voltage DC lines, on top of eight already in operation, connecting these provinces to coastal load centers, according to BNEF analysts. Less than half of these lines are designated to transmit renewable electricity. Lighting solar power at night would require more ultra-high-voltage DC lines, but China does not have any issues with more large construction.

The Chengdu night light mirror satellite will be able to illuminate an area with a diameter between 10 and 80 km, while the precise lighting beam can be controlled in a few tens of meters.

Satellite tests started years ago and now the technology is ready to be put into practice.

Kang Weimin – director of the Institute of Optics, School of Aerospace, Harbin Institute of Technology – tries to calm the concerned animalists and explained that the satellite light will be like a twilight glow; therefore it should not affect the routine of the animals.

Chengdu is the capital of southwestern China’s Sichuan province and it has about 14-15 million people.

Where is China’s solar power now?

China’s solar deployment is concentrated overwhelmingly in a handful of provinces,many of them in rural areas located far from population centers that need electricity and in areas where transmission development has not kept pace with renewables deployment and there is little storage capacity. Some of those provinces, solar-curtailment rates have approached 30%.

Solar curtailment is the rejection by China’s grid operators of a portion of the electricity that China’s solar projects generate.

The grid operators cannot take the extra power from spikes in the solar power generation. Mirror satellites can smooth out the power and make it more predictable.

It is no forgone conclusion that solar will become cost-competitive at a scale necessary to meaningfully curb carbon emissions.

The Three Gorges Dam’s output amounted to one-third of the 253 million megawatt-hours of electricity produced in 2015 by all of the solar installations on the planet combined.

In 2016, China produced 71% of the world’s solar modules, IHS Markit estimates. China installs the majority of them within its borders—mainly in large solar farms in a handful of Chinese provinces.

Glockman: Ok, I’ll call the BS on this one. Anyone been to Chengdu? me has. Smog. And what do you do when it’s cloudy? So in any case you still need base power. The Sichuan solution for this is natural gas. If anyone has followed Chinese energy investments you’ll see the money being plowed into natgas, refineries and pipes in Sichuan is multiples of anything like a “artificial sun/moon”. The whole idea of reflectors is ludicrous when the Chinese themselves are putting their money on something else – good old reliable power plants and upstream production. Never mind the technical idiocy. Just need to look at PV efficacy to see this is beyond stupid. Full moonlight on a cloudless night without discernible air pollution is 1/345th the power of sunlight under the same conditions. It’s meaningless to try and convert this into useable PV power even at twice the brightness (during the few hours it can be used).

Nah. I call the reflector thingy a hoax no matter what China Daily says.
There is no “Wu Chunfeng”
There is no “Chengdu Aerospace Science and Technology Microelectronics System”
There is no “Tian Fu New Area Science Society”

No media outlet has been able to reach these organizations for a comment, because they don’t exist. Yet somehow, media still prints this obvious fake news.