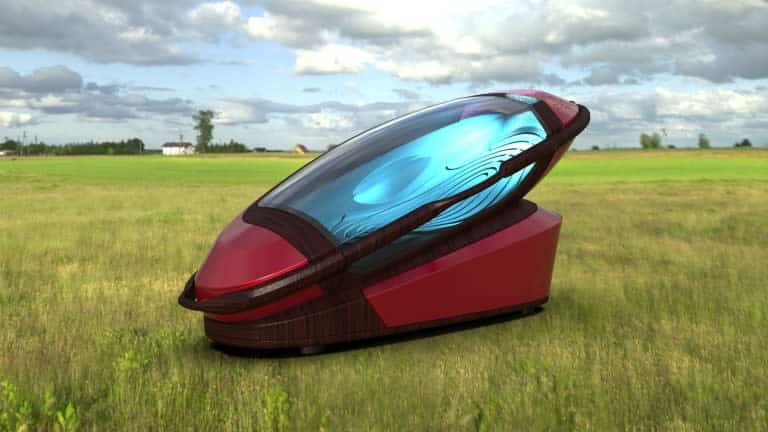 Please Share This Story!
PDF 📄
Readers will remember the 1973 movie, Soylent Green, staring Charlton Heston and Leigh Taylor-Young, where Sol (Edward G. Robinson) voluntarily reports to an assisted suicide center where he picks the music and scenery to accompany his final exit.

Is there a market for assisted suicide where people make the mechanical means of their own assistance? As in the Field of Dreams movie, “If they build it, they will come.” Could people be unknowingly brainwashed into killing themselves? Absolutely. ⁃ TN Editor

Switzerland has just legalized a new way to die by assisted suicide. The country’s medical review board has authorized the use of the Sarco Suicide Pod, which is a 3-D-printed portable coffin-like capsule with windows that can be transported to a tranquil place for a person’s final moments of life.

Conventional assisted-suicide methods have generally involved a chemical substance. Inventor Philip Nitschke of Exit International told the website SwissInfo.ch that his “death pod” offers a different approach. “We want to remove any kind of psychiatric review from the process and allow the individual to control the method themselves,” he said. “Our aim is to develop an artificial-intelligence screening system to establish the person’s mental capacity. Naturally, there is a lot of skepticism, especially on the part of psychiatrists.”

The pod can be activated from inside and can give the person intending to die various options for where they want to be for their final moments. “The machine can be towed anywhere for the death,” he said. “It can be in an idyllic outdoor setting or in the premises of an assisted-suicide organization, for example.”

To qualify to use the pod, the person who wants to die must answer an online survey that is meant to prove whether they are making the decision of their own accord. If they pass, they will be told the location of the pod and given an access code.

Once inside, the person intending to end their life will have to answer pre-recorded questions and press a button that will start the process of flooding the interior with nitrogen, which will quickly reduce the oxygen level inside from 21 percent to 1 percent. “The person will get into the capsule and lie down,” he said, adding, “It’s very comfortable.”

He said the person will likely feel disorientated or euphoric. “The whole thing takes about 30 seconds,” he said “Death takes place through hypoxia and hypocapnia, oxygen and carbon dioxide deprivation, respectively. There is no panic, no choking.”

Well, now…..isn’t THAT special?! And it has a dual use…..it doubles as a COFFIN!

OMG! Oh, my God does NOT approve of suicide! It is His decision, not mine, that decides when my life will end. To God be the glory of our eternal rest!

There was something about the “Suicide Booth” in literature (was it Philip K. Dick), or at least it was on the TV cartoon show “Futurama”.

OMG! Oh my God, would NEVER approve of suicide, under any circumstances! Death is in God’s hands, in His time. We all are here for a purpose. Try your best to do what you can and keep God first in your life.
Granny-J

Am I censored?
Really?

The fact that a “person” can fill out the application online is the first clue it will be used for fraudulent means. I’m sure it won’t be cheap. Who will pay for it? Taxpayers or those who can afford it? Very troublesome. I can imagine the very old and those who are very sick will be strongly encouraged to do this and not on their own free will.

Gee individual gas chambers! Shades of Hitler!. This is not what Jesus Christ intended for us to do. Suicide is satanic but look at the lovely way they are presenting it! Just like the Covid shots. Entice people to commit suicide and remove the burden of criminality from the perpetrators. Evil.

I think they should be called “Offyoufucks”