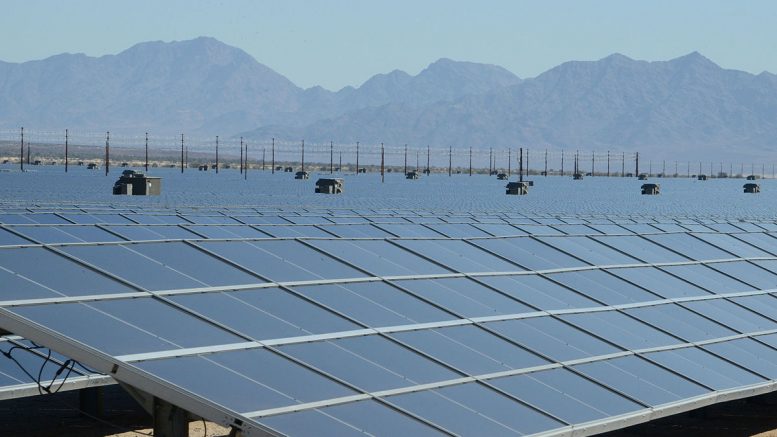 Please Share This Story!
PDF 📄
Solar and wind power are the key elements of ‘renewable power’ but both are fraught with economic and environmental problems that are seldom discussed, especially by the technocrats who are pushing them. However, it is the public that is financing and subsidizing these foolish investments. ⁃ TN Editor

One of the major reasons why hundreds of billions of dollars are poured into solar energy is that people are looking for “emissions free”, “clean” energy.

We’ve discussed the inherent problems with solar and wind energy already, but one alternative is usually overlooked: nuclear power.

Nuclear power is “green” from the environmentalist standpoint as it produces next to no emissions. It’s also reliable and inexpensive.

Plus, the technology already is already commercially viable, and scalable.  For example, 5% of the world runs on nuclear energy, and France ran on nuclear power for decades with no issues.

There was a time when nuclear energy looked like it would take the world by storm.  And honestly, if the world spent even half of the money it spent on solar energy on nuclear power, we could’ve made the transition to an emissions-free world decades ago.

So why didn’t the world just switch to nuclear when the whole green energy trend hit?

Debunking the “Problems” with Nuclear Power

First, nuclear meltdowns are sensationalized and very, very unlikely, but that didn’t stop people from irrationally fearing nuclear meltdowns in their backyard—Chernobyl is a tough image to get out of your head.

And who can blame them?  With the media’s sensational coverage of incidents like Three Mile Island, or the Fukishima disaster, it’s no wonder people were a little put off about nuclear power.

But that’s not the only reason.

The second (and possibly more important) problem is nuclear waste.  We can’t dispose of it (or so they say). Environmentalists hate that we just toss it in old mines and forget about it.

This is a legitimate concern, but I hope the same crowd that rallies against nuclear in favor of solar power won’t miss the irony of these recent findings about toxic waste.

A new report from Environmental Progress shows that solar panels produce an obscene amount of waste, especially relative to the amount of power they produce.

Here are some of the key findings:

3.  In countries like China, India, and Ghana, communities living near e-waste dumps often burn the waste in order to salvage the valuable copper wires for resale. Since this process requires burning off the plastic, the resulting smoke contains toxic fumes that are carcinogenic and teratogenic (birth defect-causing) when inhaled.

The estimates defined toxic waste as the used fuel rods and assemblies from nuclear power plants, and the multitude of heavy metals and environmentally harmful chemicals in the solar panels.

Solar Energy Is Not Environmentally Friendly

Granted, solar panel’s don’t produce radioactive waste, but they do contain hundreds of toxic chemicals and elements that can leech into the earth, poisoning aquifers and water basins.

Solar panels also contain heavy metals like lead, which can damage the nervous system, and carcinogenic metals like chromium and cadmium.

These materials need to be carefully disposed of in a similar manner to household electronic appliances. vEven so, all three of the aforementioned metals already have issues in electronic waste dumps, since they can leak into drinking water.

This is just another way that solar energy pollutes the environment—the waste is rarely processed adequately.

On the other hand, nuclear waste is heavily regulated, and stored in drums and monitored, and then encased in glass and stored deep underground in remote locations.

Even though nuclear energy builds its waste management into the cost, it’s still much cheaper than the “renewable” alternatives.

Solar, on the other hand, has been surreptitiously touted as “clean energy” even though the waste management can cause environmental disasters.

This is part of the issue: we see solar panels as benign, and therefore do little to prevent their disposal from contaminating the environment.  On the other hand, nuclear waste is treated seriously, and therefore poses far fewer environmental risks.

Aside from the toxins it produces, the fossil fuels burned to build, transport, and dispose of the solar panels severely impacts the carbon footprint of the supposedly “green” energy.

Finally, solar panels die pretty quick: they only have a lifespan of some 25 years.  Furthermore, their efficiency goes down over time, which means you’ll need to build more of them just to maintain generation capacity.

That article is from a pro-nuke blog that has no credentials whatsoever. There are so many holes in that story, where to begin? Fukushima is killing the Pacific Ocean. Solar panels do not do that. Nuclear waste is 1000 times more toxic than solar panel waste. My sister-in-law died from lung cancer after having been down-wind from Chernobyl, meltdowns do happen and they are really, really bad. Fukushima can never be made safe again. Ever. Obedient Japanese citizens are forced to pretend their children’s cancers are not from Fukushima. Solar panels only last 25 years? Nuclear plants have to be… Read more »

Fukushima is not killing the Pacific Ocean. That’s a myth spread by hysterical, lying, anti-nuke activists. And maybe solar doesn’t do that, either, but another thing that solar does not do is generate four gigawatts of electricity on four square kilometers of ground. In fact, solar generates much less electricity world-wide than nuclear does, so we haven’t yet seen what the full environmental effects of solar would be. As solar panels are out in the rain, one might expect them to leach chemicals into runoff. You might not trust the group that produced this study, but you ought to realize… Read more »

Another fact that was omitted from this article is how the land is stripped bare to install solar energy “factories”. In Southern California’s Mojave Desert north of Los Angeles thousands of acres have had all of the vegetation stripped away and solar panels installed. Drive along Highway 14 north of the Lancaster/Palmdale areas and see what has been done to the landscape. Think what this does to the wildlife in these areas. The desert is a living breathing eco system just like a marsh or any other area on this planet. Yet they continue to install these “factories/plants” because no… Read more »

Justin Trudeau​ and Catherine McKenna and the FED Liberals, as well as Rachel Notley and Shannon Phillips and the ABNDP… you are truly failing your Citizens… how does it feel?