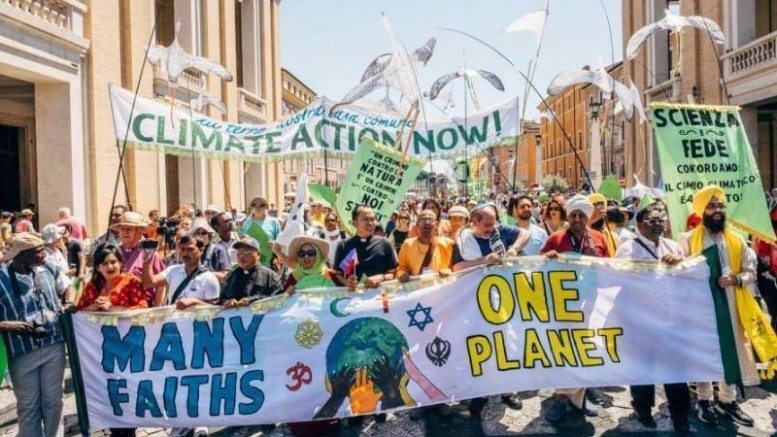 TN Note: For the first time since the dawn of climate-change rhetoric, religion is finally coming to the table: Islam, Catholics, Protestants, Hindus, Buddhists, Pagans, etc.

In 2014, the World Council of Churches stated this about the just-concluded Interfaith Summit on Climate Change:

“there has never been such a large amount of religious-environmental activity in one location in the history of the world. This week will mark a watershed in the history of religion. It will be the time that people remember as the time when the world’s faiths declared themselves, irrevocably, as green faiths “

It has been almost a quarter century since the majority of nations signed the United Nations Framework Convention on Climate Change, agreeing to “limit dangerous anthropogenic [human] interference with the climate system.” And yes, nearly 25 years since the world agreed to prevent serious impacts on global food supply, the natural environment and the economy.

This December, 195 nations will be heading to Paris for the 21st Conference of the Parties (COP21) to discuss yet again how to accomplish what they all promised nearly a generation ago. As you can imagine, the question on everyone’s mind is, “Will this time be any different?”

Climate science has certainly advanced across this time frame. Our global climate models zoom down to finer and finer resolutions; our satellites reveal remote corners of the globe; we increase our understanding of the response of giant ice sheets and deep ocean currents to a warming planet.

But more science is not the answer to global action. The first observations of human-induced climate change were published in 1938. The first U.S. president to be formally warned of the dangers of climate change was Lyndon B. Johnson, in 1965. The diplomatic arguing has not been about the science; it has been about what we are willing to do to prevent that danger. And that has a lot more to do with the values in our hearts than the facts in our heads.

For many of us—including more than 75 percent of people in the U.S.—what is in our hearts is often directly related to our faith. And what is different about this year, leading into COP21, is how faith leaders have stepped up to the plate.

Pope Francis’s encyclical, released in June, leaves nothing to the imagination in laying out the attitudes that the world’s more than two billion Christians should have toward climate change. It speaks eloquently of stewardship of God’s creation and care for the poor, those already affected by the exacerbating impacts of climate change on droughts, floods, heat waves, hurricanes and other extreme weather.

The same themes of stewardship and care for the poor have been raised by the World Evangelical Alliance and the National Association of Evangelicals in recent years. TheIslamic Declaration on Climate Change presented in August goes further, connecting the issue of climate change to humans’ relentless pursuit of economic growth and consumption and encourages the world’s 1.6 billion Muslims to support global action on climate. Today faith leaders from every corner of the world are connecting the dots between our heads and our hearts, between the scientific facts about climate change and our human response.

This is not “Good News”…

Playing the religious card is so cynical.