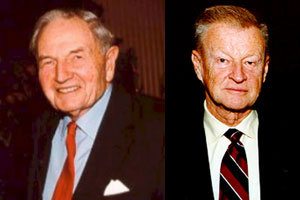 Please Share This Story!
PDF 📄
This is a recent article by a European blogger, Hügo Krüger, that looks into the life of Zbigniew Brzezinski, who was a co-founder of the Trilateral Commission – the genesis of modern globalization. Brzezinski was David Rockefeller’s right-hand man until both died a few years ago. Brzezinski is still credited with being the chief architect of China’s entrance into the global economy and its transformation into a Technocracy. ⁃ TN Editor

The Technocracy Movement was a student cult that started at Columbia University in in the 1930s. At the time it rivaled communism, fascism, socialism and all the other “isms” that idealists of the day would engage in. From America, Technocracy would spread to other parts of the world and notably Canada where its head, Dr. Joshua Haldeman, was Elon Musk’s grandfather. The movement proposed that society be reorganized on a series of “scientific propositions”, a replacement system for democracy and free enterprise.

In Technocracy Rising, Patrick Wood argues that many of the ideas of this movement were taken up by many US policy makers and notably Zbigniew Brzezinski – President Jimmy Carter’s Secretary of State. I sat down with Patrick Wood for a conversation on this system and its shortcomings.

To modern students of US foreign policy, Brzezinski is better known for arming the Mujahedeen in Afghanistan in order to provoke the Soviet Union into a war that would give them in Brzezinski’s own words “Their Vietnam”. The official story was that the US started arming the Afghans after the invasion, but Brzezinski, in the aftermath of 9/11 admitted this to not be true.

Brzezinski: Yes. According to the official version of history, CIA aid to the Mujahiddin began during 1980, that is to say, after the Soviet army invaded Afghanistan on December 24, 1979. But the reality, closely guarded until now, is completely otherwise: Indeed, it was July 3, 1979 that President Carter signed the first directive for secret aid to the opponents of the pro-Soviet regime in Kabul. And that very day, I wrote a note to the president in which I explained to him that in my opinion this aid was going to induce a Soviet military intervention [emphasis added throughout].

America provoked the USSR into a war that had an estimated 500 000 – 2 million deaths and displaced millions of refugees. Arming the Mujahedeen, that later became Al Qaida, blew up in America’s face and was arguably responsible for the events of 9/11 and and the unwinnable wars of terror that has since then ripped the middle east apart.

Brzezinski’s influence on US policy however went deeper, in 1997 he wrote the book The Grand Chess Board – on American Primacy and its Geostrategic Imperatives. His thought process gives us an insight into modern US foreign policy and in particular the current US willingness to integrate Ukraine into NATO and the EU.

Ukraine, a new and important space on the Eurasian chessboard, is a geopolitical pivot because its very existence as an independent country helps to transform Russia. Without Ukraine, Russia ceases to be a Eurasian empire. Russia without Ukraine can still strive for imperial status, but it would then become a predominantly Asian imperial state, more likely to be drawn into debilitating conflicts with aroused Central Asians, who would then be resentful of the loss of their recent independence and would be supported by their fellow Islamic states to the south.

Somewhere between 2005 and 2010, Ukraine, especially if in the meantime the country has made significant progress in its domestic reforms and has succeeded in becoming more evidently identified as a Central European country, should become ready for serious negotiations with both the EU and NATO.

Brzezinski’s attitude to empire and war must not be singled out as if he was a puppet master, but rather his ideas serve as insight into the thinking that is dominating the US and transnational ruling elite. America’s unwillingness to co-exist in a multipolar system, the constant desire to expand Pax Americana, and the attitude of international organizations to treat the general populace as uneducated peasants whose minds have to be shaped by the tune of experts and propagandists. In 1970, as Professor of political sciences at Columbia University, Brzezinski expressed his affinity for a Technocratic Surveillance State when he published Between Two Ages: America’s Role In The Technetronic Era.

“Such a society would be dominated by an elite whose claim to political power would rest on allegedly superior scientific know how. Unhindered by the restraints of traditional liberal values, this elite would not hesitate to achieve its political ends by using the latest modern techniques for influencing public behaviour and keeping society under close surveillance and control.”

The thoughts he expressed became deeply ingrained in the thinking behind the UN, WHO, WEF and “The International Rules-Based Order” that clearly prioritizes the system of technocratic rule above democracy. The plebiscite is obviously not capable of comprehending the importance of critical issues such as race, climate change, war and sustainable development and therefore his mind has to be molded by “the experts”.

With the modern attitude to online censorship and phrases such as “follow the science” and ‘the experts agree”, Brzezinski’s 1970 vision is slowly becoming our present. The elite attitude is moving us to a Neo Feudal Future that is increasingly being shaped by the Silicon Valley Oligarchs and a University Clerisy that has no more time than Medieval clerics to debate public policy.

Ultimately the underlying logic of a Technocratic System cannot work as F.A. Hayek argued in his criticism to central authority.

No matter how much data is collected, the decision maker even with artificial intelligence and a super computer cannot have the knowledge to distribute the resources better than a free market price mechanism.

A technocracy’s internal contradictions will make it collapse, but unfortunately as with all utopian decisions in the past, like the decision to arm the mujahedeen, it takes its victims with it.

America was formed to the seat of the technocratic movement, however, the desire for such control was ALWAYS the agenda. Look at all of the references to magic in literature. Well, now we have it. Not one of us REALLY knows how any of the technology that we use works. You know down to electrons flowing through something, but that’s it. And even those who know the most don’t know exactly why or how. Ergo, it’s magic. Take all of the most inductrious people in the world and bring them to one place, so that they can work together and… Read more »

“Arming Al Qaida, blew up in America’s face and was arguably responsible for the events of 9/11”.
Well, you lost me there.
BTW, Brzezinski’s wife just died on July 22nd. Mika Brzezinski over at MSNBC is left to carry on the family’s “vision”.

Hugo – I am sure you are a very intelligent, interesting and nice man but please learn to LISTEN. You constantly interrupt your guest. Please just chill out and listen to what he is saying and then state your opinion. Actually. as an interviewer you should not have an opinion. You are there to find out what your guest thinks. Let go of your ego. Please. Thanks.

[…] Technocracy And Empire: The Influence Of Zbigniew Brzezinski […]