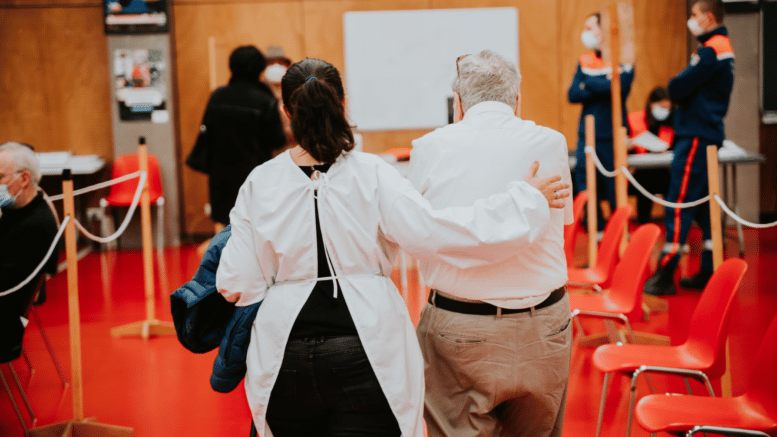 Please Share This Story!
PDF 📄
The Biden Administration is spending almost $5 billion for 171 million untested and unapproved mRNA shots this winter at $29 each to inject into the American population. It has options to buy another 600 million shot if Congress allocates more funding. The cumulative effect of multiple injections are already causing major health disruptions.

Any discussions about attacks on humanity from Big Pharma, Big Government, World Economic Forum, United Nations, etc., are immediately branded as conspiracy theories with outright denial from so-called “fact-checkers.” This demonstrates that the counter-narrative is true and the “official” narrative is false. This is a harsh reality that Americans need to grasp before our nation is ripped apart at the seams. ⁃ TN Editor

The Health and Human Services Department has secured 171 million doses of new Covid vaccines that target the omicron variant in preparation for a fall booster campaign.

HHS expects to receive the first deliveries from Pfizer and Moderna early this fall. The new vaccines that target omicron still need to be authorized by the Food and Drug Administration and cleared by the Centers for Disease Control and Prevention.

The FDA last month told Pfizer and Moderna to develop vaccines with a new formula that targets the omicron BA.4 and BA.5 subvariants in addition to the original strain of Covid that first emerged in Wuhan, China in 2019.

Omicron BA.4 and BA.5, the most contagious Covid variants yet, have caused a wave of summer infection that has led to an increase in hospitalizations. Public health officials and scientists are worried that the U.S. faces an even larger wave of infection in the fall as immunity from the original vaccines wanes and people head indoors, where the virus spreads easier, to escape the cold.

Omicron BA.5 makes up nearly 82% of new infections in the U.S. while BA.4 is causing about 13% of new cases. The U.S. is reporting at least 126,000 new infections a day on average as of Wednesday, according to data from the CDC. But the real number of new infections is likely far higher because so many people are using at-home Covid tests, which aren’t picked up by the official data.

Moderna’s and Pfizer’s current shots are based solely on the original strain of Covid that emerged from China more than two years ago. The virus has mutated dramatically since then and, as a consequence, the vaccines are no longer effective at blocking infections. President Joe Biden recently caught Covid, likely BA.5, despite being fully vaccinated and twice boosted. But the current vaccines are still effective at preventing severe disease and death. The president recovered in a matter of days after also taking Paxlovid, Pfizer’s oral antiviral treatment.

Chemical Warfare: Disrupting The Enemy’s Health Is An Age-Old Military Tactic — Wirral In It Together – New Human New Earth Communities

You all know what are considered infections, right? A positive test. Which is interesting, because you can have severe symptoms of something and test negative, but if you have no symptoms (no nothing, no hint of anything) and test positive, you quarantine — take this for what it looks like; a game.

And from what I’ve seen and heard, people have been testing positive quite often with no symptoms and never develop a single symptom of anything.

“Disrupting The Enemy’s Health”
So his own TAX payers are his enemies?