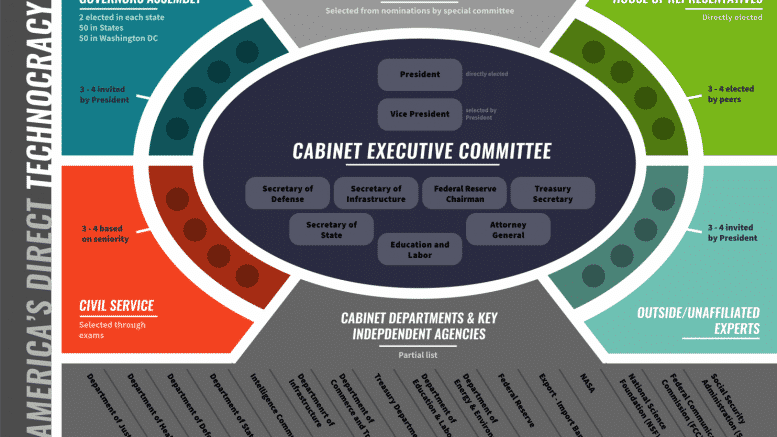 Please Share This Story!
PDF 📄
The rise of Technocracy is widely noted but still little understood. The original 1930s Technocrats boasted “There will be no place for Politics, Politicians, Finance or Financiers”. In other words, it forces out political structures and creates a Scientific Dictatorship in their place. ⁃ TN Editor

The first report cards on democracy and economic freedom for 2021 are out and the results are not good. Economic Intelligence Unit, the sister company of The Economist magazine, found that last year’s Democracy Index had fallen by almost a tenth of a percent. That’s the biggest drop in the index’s 15-year history.

The Heritage Foundation’s Index of Economic Freedom, meanwhile, saw a similar albeit larger decline of 1.6 points out of 100. Heritage looked at economic policies and conditions in 177 countries while the Democracy Index looked at 167 countries.

Both reports blame government-enforced COVID restrictions for the declines. The Index of Economic Freedom noted that increased government spending to make up for lost income had failed because it “increases inflation and generates huge public debts that future generations will have to pay.” The Democracy Index noted that both developed democracies like the United States and authoritarian regimes like North Korea slid towards more technocracy. It worried that emergency powers enacted by governments won’t go away even as the pandemic subsides.

“[H]istory teaches us that once they acquire these sorts of emergency powers, governments are generally reluctant to remove them from the statute books,” Joan Hoey, editor of the Democracy Index, told me in an email. She said warnings in 2020 hadn’t been heeded: “This state of affairs is becoming normalized and the public is becoming habituated to this extension of state power over many areas of life. This raises some troubling Qs about the future of democracy: in what circumstances and for how long are governments and citizens prepared to accept this extraordinary extension of state power and withdrawal of civil liberties in the cause of public health — or indeed any other threat in future?”

The Index of Economic Freedom’s findings explains why that public trust is low. It points out that politicians have handed out favors to “societal elites or special interests” that “exercise the most influence on and control over the government and its institutions.” It’s a populist message, one that’s been expressed across the globe for the last decade.

The Democracy Index doesn’t necessarily see populism as a bad thing, though it does think it tends to cause governments to recoil rather than reform. “There is some indication that the populists have had an impact in terms of injecting more political competition and contestation into the body politic, something that has been sorely lacking,” Hoey says. “But things need to go much further if we are to see a more substantial revival of representative democracy and genuine political contestation.”

But how? What happens when the body politic cordons itself off into segments instead of listening to others? The Democracy Index suggests “physician, health thyself,” that Western nations should emphasize and, more importantly, follow their own democratic ideals. The authors suggest that doing this will encourage people to be more tolerant and respectful of other viewpoints, and avoid becoming a technocratic state ruled by fiat a la China.