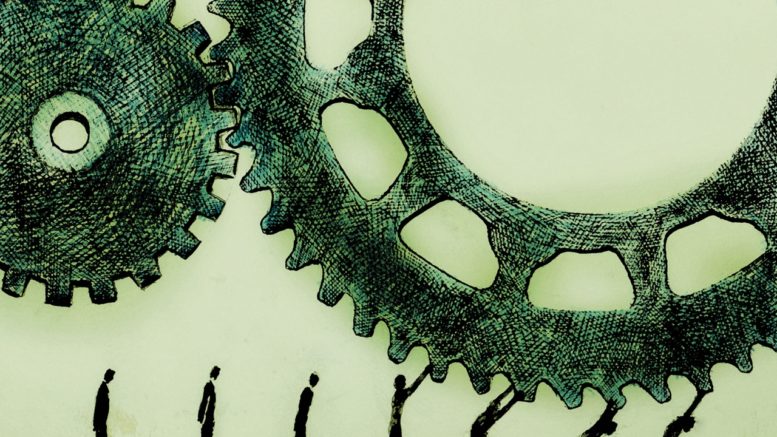 Please Share This Story!
PDF 📄
One environmentalist has realized that Technocracy is destructive to the environment and to mankind in general. He suggests that modern Luddism is anti-Technocracy rather than anti-technology.

For clarification, TN is not promoting Sustainable Development, Environmentalism, Green Economy or Green New Deal. This article is important because it gives a more cautioned view of Technocracy being the real driver of modern environmentalism, with which TN would agree. Technocracy is the heartbeat of modern globalization that promotes increased development by scientific innovation and social control. In sum, Technocracy is no friend of anyone, regardless on their political position. ⁃ TN Editor

A little over two centuries ago, on March 11, 1811, a small band of weavers and other skilled textile industry workers broke into a shop in the village of Arnold in Nottinghamshire, England, and smashed several “wide stocking frames” — mechanical knitting machines, relatively new at the time, that could mass produce knitted material for stockings. The action of these workers, who named themselves Luddites, sparked a rebellion against the use of machines that swept across various industries in the region until it was eventually suppressed with legal and military force in 1813.

The Luddites were not technophobes, as the history written by the victors tells it, nor were they opposed to the use of machines per se. In fact, many of them were highly skilled machine operators. Their slogan was that they would “put down machinery hurtful to Commonality,” i.e., to the common good and the common people, to the values of a society based upon the Commons. They put that into self-disciplined practice, breaking some machines whilst leaving others in the same room alone. The Luddites were among the few social movements that thought about technology in a political way, that understood that technology is never neutral — it is both socially constructed and has its own set of “technological values” that shape it in consistent ways.

In my view, that is the lesson the environmental movement needs to learn when it comes to technology — precisely not that the whole problem is bad technology and the solution is better technology, but that we have to escape from the tendency to think about technology and society separately. We need to think techno-socially.

The reason that technology issues are so critical in our current environmental crisis is that technology is the nexus between humans and nature. The impact of societies on the environment tends to be defined by two things — the technology that they use, especially to produce the necessities of human life, and the religious and cultural ideas they have about humanity and its relation to nature.

In traditional and feudal societies, cultural ideas tended to moderate human manipulation of nature. But, as many writers of the 1970s green movement have argued, since the Scientific Revolution of the seventeenth century, the increasing technological control and domination of nature has come to be defined as “progress.”

I believe the roots of the environmental crisis lie as much in the technocratic attitude towards nature expressed in Western cultures and technologies as in the capitalist drive for profit, growth, and accumulation. The power of industrial-capitalism is that its technological, social, and economic values mutually reinforce one another.

Plenty has been written about capitalism, growth, corporate greed, and misbehavior, etc., so let’s focus on the industrial aspect.

I call the system of power over humans and nature built upon scientific and technological knowledge “technocracy.” It comprises several elements, including:

Many of the most obvious examples of the technocratic values of domination and control of nature can be seen in industrial agriculture, including the large-scale reshaping of landscapes via massive deforestation, the use of monocultures that create huge pest problems and destroy biodiversity, the suppression of those pests with pesticides, and the treatment of animals in factory-farming as “production units” rather than living beings. Other current examples include synthetic biology and geoengineering, where we see the drive toward total control of nature at the smallest and largest scales. In these cases, it is clear how technocratic concepts harm nature. However, to understand how the overall industrial system has led to our global environmental crisis, we need to look more deeply into its workings.

In Pre-industrial societies, most necessities of life are produced at the family or village level, using local raw materials and human skills. In these systems, the natural resources of the Commons are managed communally in order to preserve sustainability and social fairness.

In the industrial system, workers’ knowledge of the natural or raw materials and their hand-brain skills are appropriated by the machine owner and embodied in machinery; the craftsperson is reduced to a low-paid lever-puller. The industrial production process is more efficient, but the alienation of the worker from the products of their labor, and their alienation from nature are just different facets of this same techno-social process.

This fundamental process of dispossession of humans and destruction of our relationship with nature is writ large in industrial societies. The basic business plan of industrial capitalism is to make us dependent upon industrial commodities and the market for our basic needs. Through mechanization of agriculture and the enclosure of the Commons (all in the name of increased efficiency), the bulk of the population is exiled to the cities.

The environmental impact of industrial-capitalism is predictable. Traditional production systems, based as they are upon local resources and human skills, are limited by their relatively low energy inputs. Their environmental impacts are, therefore, inherently limited. They have been tested for sustainability over generations, through people’s direct experience.

Industrial production systems, in contrast, are based upon abstract and universal technical knowledge and are, therefore, inherently much less limited in their scope. As industrial production processes grow, they become impossibly complex, relying upon extraction of raw materials from far-off places. And as industrial ramifications become global, it becomes increasingly impossible for people who no longer have any control over the production process (and who have become dependent upon the products being churned out by industry) to exert any direct control over its impacts upon nature. So, when there is a problem — and problems are common — we are reduced to campaigning for the masters of industrial technology to deal with it.

Almost all social and environmental problems are due to a combination of social and technical issues, mostly resulting from the distortion of social, economic, and material relations in industrial-capitalist society. Because of their technocratic training, which divorces science from its political context and rules out science which includes it, scientists tend to be like the proverbial person whose only tool is a hammer: Every problem looks to them like a nail. Frustrated by the complex nature of the problems, and the need to address them politically, scientists perpetually try to cut the Gordian knot with technical solutions. But this technocratic misframing of the problem creates as many or greater problems than those they were intended to solve, requiring a new generation of techno-fix “solutions.” Because they occur within a capitalist social context, such “solutions” serve the interests of corporations by giving them new products (drugs, seeds, gadgets etc.) to sell.

A classic example of a supposedly green technofix is the idea of using genetic engineering to increase crop yields and feed the world, which is still being touted by some scientists and “eco-modernists.” The basic misconception here is that people across the world are going hungry because there isn’t enough food to go around, when in fact, it has been repeatedly demonstrated that there is plenty of food. Poor people are hungry because they cannot afford to buy enough food. And poverty is the result of unjust socioeconomic systems, not inadequate crop yields: World hunger demands a political, not a technological solution.

In the 1960s and ’70s, radicals critical of the role of science and technology in capitalism created other models of technology development that will become essential to revisit and relearn in the current crisis.