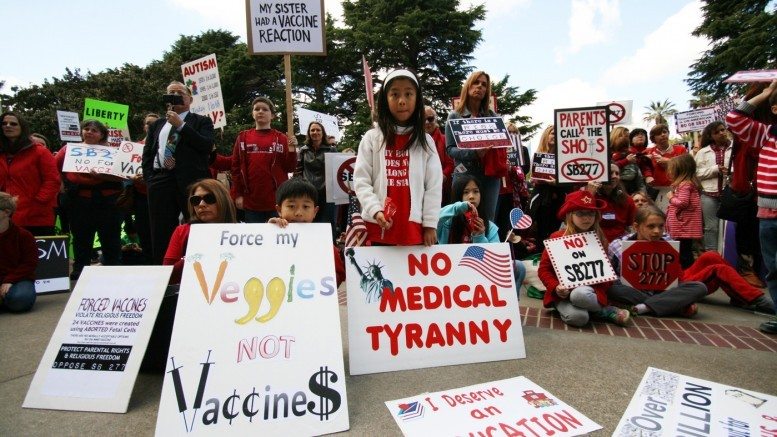 Big Pharma, which is full of Technocrat groupthink, demands universally mandated vaccinations that either don’t work or are harmful to the human population. Anti-Vaxxers are demonized, harassed and censored for daring to use common sense in defense against the propaganda. ⁃ TN Editor

We are living in a day and age where there is a tremendous divide occurring among the populace on multiple subjects, one of them being vaccination. We are heavily marketed with the idea that vaccines are completely safe for everybody, that they save lives, and that the science is settled. This type of narrative comes straight from pharmaceutical companies and federal health regulatory agencies like the Centers for Disease Control (CDC).

However, there is a lot of science that continues to emerge which summarily discount the claims being made by pharmaceutical companies and federal health regulatory agencies. Not only are there contradictions in their science, but also extreme corruption within these companies and agencies has been exposed on multiple occasions. One great example would be senior CDC scientist Dr. William Thompson, who blew the whistle in 2014 on data corruption by executives within the CDC with regards to falsified data pertaining to the MMR vaccine. One study which purports to show no link between the vaccine and autism had some of its data sets removed, which otherwise showed a strong correlation between the vaccine to autism.

Two years after that more than a dozen senior CDC scientists anononymously put out a paper (the SPIDER papers) in which they expressed their concerns about the corruption within the agency, its complacency, and undue corporate influence on the published science. The revolving door that exists between these agencies contributes to the continued corruption. As an example, CDC Director from 2002-2009 Julie Gerberding became the head Merck’s vaccines division, which came with a $2.5 million annual salary and $5 million in stock options.

A study published as far back as 1994 in the JAMA Internal Medicine details quite clearly that the Measles vaccine does not and has not worked:

The apparent paradox is that as measles immunization rates rise to high levels in a population, measles becomes a disease of immunized persons. Because of the failure rate of the vaccine and the unique transmissibility of the measles virus, the currently available measles vaccine, used in a single-dose strategy, is unlikely to completely eliminate measles. The long term success of a two-dose strategy to eliminate measles remains to be determined. (source)

There are many examples up to the present day that clearly indicate the failure of the vaccine. For example, A study published in the highly authoritative Bulletin of the World Health Organization looked at recent measles occurrences throughout China and found that there were 707 measles outbreaks in the country recorded between 2009 and 2012, with a steep upward trend in 2013. “The number of measles cases reported in the first 10 months of 2013 – 26,443 – was three times the number reported in the whole of 2012.” This is odd considering that since 2009 “…the first dose of measles-virus-containing vaccine has reached more than 90% of the target population.” (source)

A study published in the journal Clinical Infectious Diseases – whose authorship includes scientists working for the Bureau of Immunization, New York City Department of Health and Mental Hygiene, the National Center for Immunization and Respiratory Diseases, and the Centers for Disease Control and Prevention (CDC), Atlanta, GA – looked at evidence from the 2011 New York measles outbreak, which showed that individuals with prior evidence of measles vaccination and vaccine immunity were both capable of being infected with measles and infecting others with it (secondary transmission). (source)

During the measles outbreak in California in 2015, a large number of suspected cases occurred in recent vaccines. Of the 194 measles virus sequences obtained in the United States in 2015, 73 were identified as vaccine sequences. The Pharma-owned media generated high public anxiety, a form of fear mongering that led the public to demonize unvaccinated children, who were falsely perceived as the spreaders of this disease. Rebecca J. McNall, a co-author of the published report, is a CDC official in the Division of Viral Diseases who had the data proving that the measles outbreak was in part caused by the vaccine. It is evidence of the vaccine’s failure to provide immunity. (source)

How Many People Is The Measles Vaccine Injuring?

According to a MedAlerts search of the Vaccine Adverse Event Reporting System (VAERS) database, which is the subject of the pilot study mentioned above, as of 2/5/19, the cumulative raw count from measles, mumps, and rubella vaccines alone was: 93,929 adverse events, 1,810 disabilities, 6,902 hospitalizations, and 463 deaths.

The National Childhood Vaccine Injury Act has paid out approximately $4 billion to compensate families of vaccine-injured children. As astronomical as the monetary awards are, they’re even more alarming considering HHS claims that only an estimated 1% of vaccine injuries are even reported to the VAERS. Again, these facts are also illustrated by the study that’s the main focus of this article. If the numbers from VAERS and HHS are correct, only 1/3 of the petitions are compensated – then the compensation could be up to 300 times greater, if all vaccine injuries were actually compensated for.

There are many examples up to the present day that clearly indicate the failure of the vaccine. For example, A study published in the highly authoritative Bulletin of the World Health Organization looked at recent measles occurrences throughout China and found that there were 707 measles outbreaks in the country recorded between 2009 and 2012, with a steep upward trend in 2013. “The number of measles cases reported in the first 10 months of 2013 – 26,443 – was three times the number reported in the whole of 2012.” This is odd considering that since 2009 “…the first dose of measles-virus-containing vaccine has reached more than 90% of the target population.” (source)

The tactic of Pharma-owned mainstream media is to use fear, ridicule and terms like “Anti-Vaxxers” to marginalize anyone who doesn’t believe the entire planet should be vaccinated. Vaccine advocates and mainstream media never really seem to address the points made, like the ones above, or the science provided by vaccine safety advocates. This alone should tell us something about the safety of vaccines, and why the push for mandatory vaccination is highly objectionable.

Because mainstream media, mainstream education, and our pharma-driven health care system have a stranglehold on the proliferation of information, not many people are aware of the information that’s presented in this article. If we continue to give our brains away to these authority figures, we continue to be impacted by extreme amounts of propaganda. However, as we start thinking for ourselves and realize that there is a lot of information out there that is being kept from us, the picture becomes a little more clear.