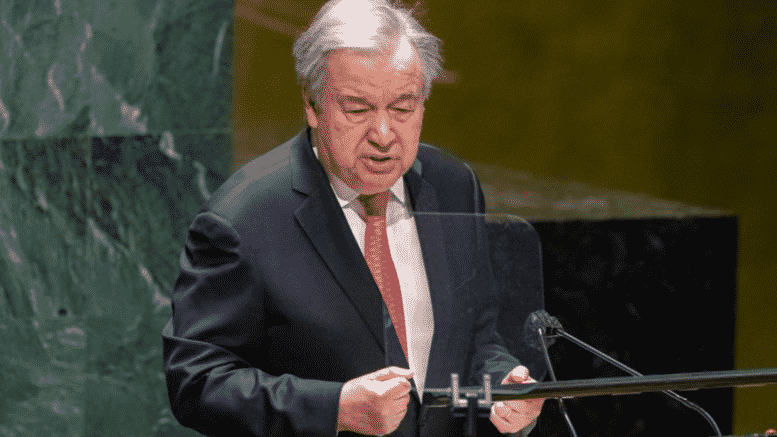 Please Share This Story!
PDF 📄
The UN is the seat of modern Technocracy, aka Sustainable Development and Green Economy. Remembering that Technocracy defined itself as “the science of social engineering” as far back as 1938, propaganda is the main tool used today to drive populations into submission. Secretary-General António Guterres is pounding the podium to stimulate urgent action. ⁃ TN Editor

At a time when “the only certainty is more uncertainty”, countries must unite to forge a new, more hopeful and equal path, UN Secretary-General António Guterres told the General Assembly on Friday, laying out his priorities for 2022.

“We face a five-alarm global fire that requires the full mobilization of all countries,” he said, referring to the raging COVID-19 pandemic, a morally bankrupt global financial system, the climate crisis, lawlessness in cyberspace, and diminished peace and security.

He stressed that countries “must go into emergency mode”, and now is the time to act as the response will determine global outcomes for decades ahead.

Stopping coronavirus spread must be at the top of the agenda everywhere, said Mr. Guterres, calling for countries to “go into emergency mode in the COVID-19 battle.”

At the same time, the virus cannot be used as “cover” to undermine human rights, curtail civil space and freedoms, or impose disproportionate restrictions.

“Our actions must be grounded in science and common sense,” he said. “The science is clear: Vaccines work.  Vaccines save lives.”

Yet, vaccine inequity persists despite a global strategy to inoculate 40 per cent of all people by the end of last year, and 70 per cent by the middle of this year.

Richer nations have vaccination rates seven times higher than those in countries in Africa, meaning the continent will not reach the 70 per cent threshold until August 2024.

Furthermore, although 1.5 billion doses are produced each month, distribution is “scandalously unequal,” he said.

“Instead of the virus spreading like wildfire, we need vaccines to spread like wildfire,” Mr. Guterres stated, urging all countries and manufacturers to prioritize supply to the COVAX solidarity initiative.

He also underscored the need to combat the “plague” of vaccine misinformation, and to improve preparedness for future pandemics, including through strengthening the authority of the World Health Organization (WHO).

The system is supposed to ensure stability by supporting economies through financial shocks, such as the pandemic, but he said lopsided investment is leading to lopsided recovery from the crisis.

As a result, poorer countries are experiencing their slowest growth in a generation, while middle-income nations are denied debt relief despite surging poverty levels. Most of the world’s poor are women and girls, who are paying a high price in lost healthcare, education and jobs, the UN chief added.

“The divergence between developed and developing countries is becoming systemic – a recipe for instability, crisis and forced migration. These imbalances are not a bug, but a feature of the global financial system,” he said.

Since the onset of the pandemic, the Secretary-General has called for reform of the global financial system to better support developing countries.

The measures he has recommended include redirecting Special Drawing Rights – a type of foreign reserve asset – to countries that need help now, a fairer global tax system, and addressing illicit financial flows.

Mr. Guterres will continue to push for reform this year, which he urged countries to support.

For the Secretary-General, countries have no choice than to to go into “emergency mode” against the climate crisis.

The world is far off-track on limiting global temperature rise to 1.5 degrees above pre-industrial levels, as outlined in the Paris Agreement on climate change.

Global emissions must be reduced by 45 per cent by the end of the decade to reach carbon neutrality by mid-century, which requires “an avalanche of action” in 2022.

All developing and developed countries that are major emitters must do more, and much faster, he said, taking into account common but differentiated responsibilities.

The UN chief appealed for the creation of coalitions that will provide financial and technical support to nations, which include some of the big emitters, that need assistance in transitioning from coal power to renewable energy.

Meanwhile, all governments must strengthen their Nationally Determined Contributions (NDCs), their climate action plans under the Paris Agreement, until they collectively deliver the 45 per cent emissions reduction target.

Mr. Guterres was clear: “No new coal plants. No expansion in oil and gas exploration. Now is the time for an unprecedented investment surge in renewable energy infrastructure, tripling to $5 trillion dollars annually by 2030.”

Furthermore, wealthier countries must finally make good on their promise to provide $100 billion in climate finance to developing countries, starting this year.

Action on climate adaption is also an urgent priority.  At the COP26 climate conference in Glasgow last year, countries committed to double adaptation finance, from $20 billion.  The UN chief called this “a good first step”, though still far short.

“Access and eligibility systems must be reviewed to allow developing countries to get the finance they need on time,” he said.

Mr. Guterres acknowledged that climate response requires extraordinary effort, and he pointed to young people as a source for inspiration.

“As with so many other issues, young people are on the frontlines in pushing for progress. Let’s answer their calls with action”, he told ambassadors.

While technology offers extraordinary possibilities for humanity, Mr. Guterres warned that “growing digital chaos is benefiting the most destructive forces and denying opportunities to ordinary people.”

He spoke of the need to both expand internet access to the nearly three billion people still offline, and to address risks such as data misuse, misinformation and cyber-crime.

“Our personal information is being exploited to control or manipulate us, change our behaviours, violate our human rights, and undermine democratic institutions. Our choices are taken away from us without us even knowing it”, he said.

The UN chief called for strong regulatory frameworks to change the business models of social media companies which “profit from algorithms that prioritize addiction, outrage and anxiety at the cost of public safety”.

He has proposed the establishment of a Global Digital Compact, bringing together governments, the private sector and civil society, to agree on key principles underpinning global digital cooperation.

Another proposal is for a Global Code of Conduct to end the infodemic and the war on science, and promote integrity in public information, including online.

Countries are also encouraged to step up work on banning lethal autonomous weapons, or “killer robots” as headline writers may prefer, and to begin considering new governance frameworks for biotechnology and neurotechnology.

With the world now facing the highest number of violent conflicts since 1945, peace is badly needed.

Here again, countries must act in the face of challenges such as the assault on human rights and rule of law; rising populism, racism and extremism; and escalating humanitarian crises, fuelled by climate change.

Mr. Guterres underlined the UN’s commitment to peace, pledging to spare no effort in mobilizing international action in numerous areas across the globe.

In Afghanistan, for example, the goal is to provide support to the people, inject cash to avoid economic meltdown, ensure full respect of international law and human rights – particularly for women and girls –  and fight terrorism effectively.

Stressing that “this world is too small for so many hotspots”, Mr. Guterres called for a united UN Security Council to address these challenges.

“Geo-political divides must be managed to avoid chaos around the globe.  We need to maximize areas for cooperation while establishing robust mechanisms to avoid escalation,” he said.

The UN is also working to ensure women are at the centre of conflict prevention, peacemaking and peacebuilding, and that they are involved in decision-making and mediation surrounding peace processes.

Given the sheer number of conflicts across the globe, the Secretary-General called for greater investment in prevention and peacebuilding, underscoring the need for a strong and effective UN.

The Organization has made significant progress on reform in the past few years, he said, urging continued support from Member States, particularly for the annual programme budget.

Guterres is a satanic servant.

“to the raging COVID-19 pandemic, a morally bankrupt global financial system, the climate crisis, lawlessness in cyberspace, and diminished peace and security”

1. raging COVID-19 pandemic – does not exist
2. morally bankrupt global financial system – their enablers
3. climate crisis – the second largest lie after the Covid-Hoax
4. lawlessness in cyberspace – really bad, people can still say what they think, mostly at least
5. diminished peace and security – thanks to criminal UN and UN sub organizations and all other globalist §hit holes.

Find and read “The Report From Iron Mountain On The Possibility and Desirability of Peace”, 1967 Dial Press. It was a study commissioned by JFK (and ended by LBJ) on the ability and possibility to end wars.
The study was never to be published, yet one within the group felt it should be and did.
You will see in the study that War does five things. Read it to find out what. There is a pdf of the report online.

All of these crises have been created by the globalists… who then want to “solve” them for us with a reset that benefits them.

3. The WAR/PEACE Research Agency’s other principal responsibility will be “War Research.” Its fundamental objective will be to ensure the continuing viability of the war system to fulfill its essential nonmilitary functions for as long as the war system is judged necessary to or desirable for the survival of society.

Sorry but I just can’t get excited by an old man pounding on a podium. Now a cute young woman pounding is something that I would pay attention to. ;>)

Sorry about that my basser instincts just surfaced. Gotta work on that.

God! Does this guy sit at his desk stringing together loads of ridiculous buzz words using twisted logic about women, children, undeveloped countries and climate change so the stupid people will swallow his ridiculous, stale pablum? Seems so. No matter. He’s a liar, criminal, thief and mass murderer like the rest of them. “…world now facing the highest number of violent conflicts since 1945, peace is badly needed.” YES, peace is badly needed everywhere but NOT from your UN/WEF totalitarian criminal organization. Notice how he is very careful NOT to mention the worldwide opposition movement occurring now which is actually… Read more »

Intro to Oppenheimer’s ‘The same rhetoric, lies and trials are before us!’ – United States Patriot News

[…] emergency mode”, and now is the time to act as the response will determine global outcomes for decades ahead. Indeed it […]