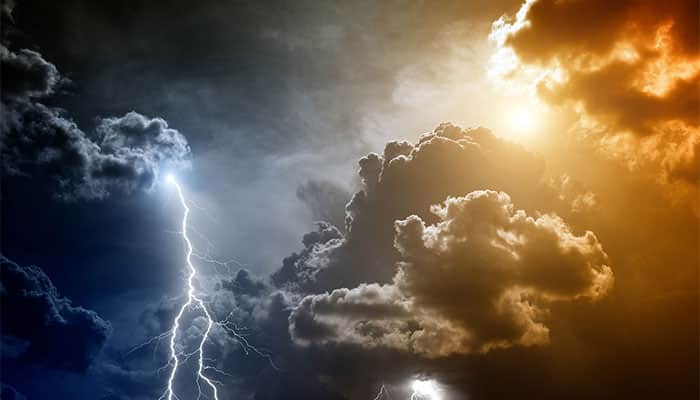 Almost every day there are stories in the media about weather or climate events that create the impression that they are new and outside of the normal pattern. None of them are. They are deceptions created and manipulated by technocrats. The objective is to sensationalize the story, by using a period of record that provides the desired result. It is in the practice of modern politics defined by H. L. Mencken a few years ago.

“The whole aim of practical politics is to keep the populace alarmed, and hence clamorous to be led to safety, by menacing it with an endless series of hobgoblins, all of them imaginary.”

A simple trick with a climate hobgoblin is to pick a period in which your claim is valid.

The first major and classic example occurred in Chapter 8 of the Intergovernmental Panel on Climate Change (IPCC) 1995 Report. They showed as evidence of human-caused warming a graph of the “Upper Atmosphere Temperature.”

However, the deception is exposed when plot the complete record. 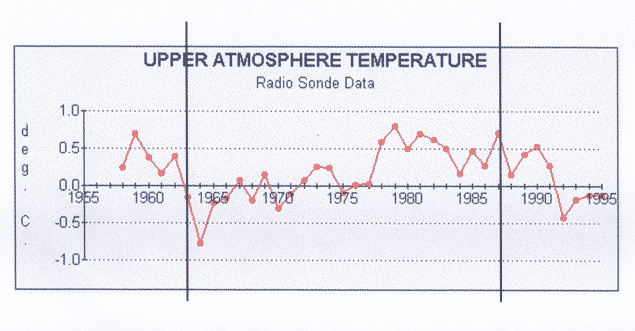 This practice of cherry-picking the period of study is not exclusive to the media. It was a clear sign of corruption of climatology brought to a head with Roseanne D’Arrigo’s infamous comment to the 2006 National Academy of Science (NAS) panel that if you are going to make a cherry pie, you have to pick cherries.

That doesn’t condone the media use of the technique. All it does is illustrate why it was a convenient technique for creating a deception about what is normal.  For example, a 2017 BBC headline said “Hottest June day since summer of 1976 in heatwave.” That is 41 years, which is statistically significant but not climatologically significant. A Youtube story reports “Sydney has wettest November day since 1984.” CBS Pittsburgh reported “NWS: 2018 is the 2nd Wettest Year on Record in Pittsburgh.” The record began in 1871 or 147 years ago, but even that is not climatologically significant. The ones I like are this one from North Carolina, that says, “A Look Back at the Coldest day Ever in North Carolina.” “Ever” is approximately 4.5 billion years.

Other stories focus on a pattern or change in a pattern again with the idea that it is new or abnormal. Headlines like this one from 2012, “Why have there been more tornadoes than usual this year?” Often, they are suggestive such as this 2017 New York Times story. “The 2017 Hurricane Season Really Is More Intense Than Normal.” When you read the story, you find, as is usually the case, that the caveats at the end indicate it is not unusual. The problem is the headline already set the pattern in the public mind.

The headline says, “Forget El Nino, StormFest Is about To Hit The West Coast.” The author is talking about a series of storms tracking on to the west coast of North America. The story told us,

“Things often calm down after January 1 during El Nino years… but not this year… with the U.S. West Coast from central California to Washington State about to be pummeled by a series of storms.   Rain, snow, wind?  Plenty for everyone. A view of the latest infrared satellite imagery shows an amazing line-up of one storm after another stretching way into the Pacific.  A traffic jam of storms.”

The terms, “pummeled” and “traffic jam” are evocative and imply the pattern is unusual. In fact, the pattern is perfectly normal to the point that there is a descriptive term for it, the Pineapple Express.  This refers to the establishment of the Polar Front along the northwest coast of North America after it migrates south from its summer position off the coast of Alaska and northern British Columbia. Low pressure systems known as anti-cyclones develop along the Front all year round. The areas affected by these systems changes as the Front migrates between its more northerly summer position and more southerly winter position. The term Pineapple Express refers to the situation in the winter when these anti-cyclones generate in the region of Hawaii and track along the Front hitting the northwest coast in a series of storms. The pattern does not stop in an El Nino year but sometimes takes a different path.

These anti-cyclone systems are also the focus of exploitation of normal weather events as abnormal, in Europe. The southerly shift of the Polar Front in the Northern Hemisphere occurs around the globe. Two major factors influence the weather pattern, sea surface temperatures that fluctuate with ocean circulation, and the Rossby Wave pattern in the Circumpolar Vortex. This pattern of anti-cyclones hitting western Europe in the winter was added to the propaganda list when they started naming the storms. It linked them to hurricanes in the public mind, and it implied they were a recent phenomenon.

They are not recent, new, or of greater intensity.

A significant part of professor Hubert Lamb’s ground-breaking and monumental work on historical climatology was a long-term reconstruction of the pattern of these anti-cyclones. It fit with his claim about why he established the Climatic Research Unit (CRU) at the University of East Anglia.

“…it was clear that the first and greatest need was to establish the facts of the past record of the natural climate in times before any side effects of human activities could well be important.”

Once he created a long-term record of these anti-cyclonic systems, there was a better chance of determining the underlying mechanisms. From this, he could achieve his final objective of better forecasting. The ability to forecast defines science. If that is not the final objective, the work is mostly irrelevant.

Consider the destructive and history-altering impact of storms like the one that hit the Spanish Armada that attempted to invade England in 1588. Ironically, Phil Jones, who ran the CRU reputation into the ground while under his direction, wrote a good synopsis of Lamb’s work. There is also the storm of 1703 reported in great detail in the book “The Storm” by the famous author Daniel Defoe.

Marcel Leroux was an early major skeptic of the claim of anthropogenic global warming (AGW). His 2005 book “Global Warming: Myth or Reality” was impactful because Leroux was well qualified. As one review of his book notes,

“In the global-warming debate, definitive answers to questions about ultimate causes and effects remain elusive. In Global Warming: Myth or Reality? Marcel Leroux seeks to separate fact from fiction in this critical debate from a climatological perspective. Beginning with a review of the dire hypotheses for climate trends, the author describes the history of the 1998 Intergovernmental Panel on Climate Change (IPCC) and many subsequent conferences. He discusses the main conclusions of the three IPCC reports and the predicted impact on global temperatures, rainfall, weather and climate, while highlighting the mounting confusion and sensationalism of reports in the media.”

The comment about sensationalism in the media is relevant to this article because Leroux, like Lamb, also worked on a reconstruction of the anti-cyclonic systems in the North Atlantic. Leroux also worked on another later exploitation of the normal by John Holdren, Obama’s Science Advisor, the so-called “Polar Vortex.” Leroux’s 1993 work on the impact of the “The Mobile Polar High: a new concept explaining present mechanisms of meridional air-mass and energy exchanges and global propagation of palaeoclimatic changes” showed how these outbreaks of cold Polar air are normal weather events that enter the climate record because of their regular but variable appearance and impact.

An unholy alliance confronts us. It is between the political use of science by the Intergovernmental Panel on Climate Change, the spin doctors or, as I prefer, the professional liars, and the mainstream media, that create fake news by making the normal appear abnormal. As the Yiddish proverb observes, “Truth never dies but lives a wretched existence,” especially under such a deliberate onslaught.

Dr. Tim Ball is a renowned environmental consultant and former professor of climatology at the University of Winnipeg. He has served on many local and national committees and as Chair of Provincial boards on water management, environmental issues and sustainable development. Dr. Ball's extensive science background in climatology, especially the reconstruction of past climates and the impact of climate change on human history and the human condition, made him the perfect choice as the Chief Science Adviser with the International Climate Science Coalition.
Subscribe
3 Comments
Oldest
Newest Most Voted
Inline Feedbacks
View all comments

The only thing “extreme” is 24/7 weather reporting that uses the word a thousand times to describe fairly typical conditions.