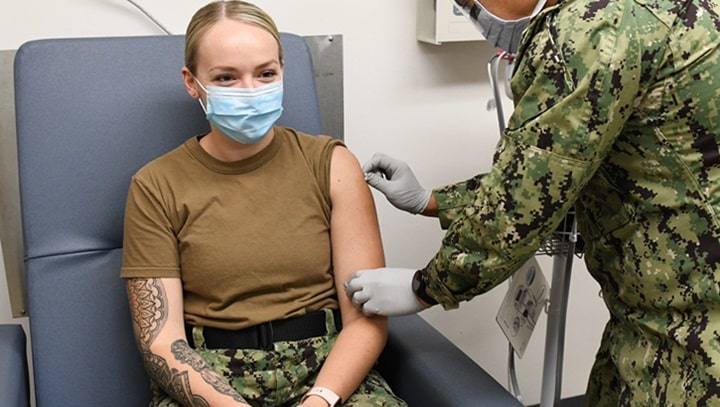 Please Share This Story!
PDF 📄
The military/industrial complex is tightly aligned with Big Tech and Big Pharma Technocrats to bring about the WEF’s Great Reset. Soldiers will receive the injections, already known to cause serious injury to the recipients, up to and including death. ⁃ TN Editor

The US Army is preparing to enforce mandatory coronavirus vaccinations for service members from the beginning of September, according to an Army Times report.

“The directive came from an execute order sent to the force by Department of the Army Headquarters,” the report adds.

An update to a purported leaked military directive says that “Commands will be prepared to provide a backbrief on servicemember vaccination status and way ahead for completion once the vaccine is mandated.”

Both the Army and the DoD have denied that there are plans for mandatory vaccinations.

Army spokesperson Maj. Jackie Wren staled that “As a matter of policy we do not comment on leaked documents. The vaccine continues to be voluntary.”

“If we are directed by DoD to change our posture, we are prepared to do so,” Wren added.

The military is experiencing vaccine hesitancy, just as in the greater population. This is sure to continue, with new research linking heart issues and chest pains in soldiers to mRNA vaccines.

The latest study, published in JAMA’s Cardiology Journal on Tuesday, showed that 23 male soldiers (including 22 who were deemed “previously health”) between the ages of 20 and 51 presented “acute onset of marked chest pain” within four days of receiving their second dose. Patients who sought care for chest pain in the military health-care system following COVID-19 vaccination and were subsequently diagnosed with clinical myocarditis were included in the case study.

In the UK, soldiers have been warned that if they decline the vaccine they will face ‘punishment and re-education’.

Doing Russia’s and China’s job! Oh man, how is this possible? It simply shows that the army is in the hand of the enemy.

The unintended consequence of a mandatory “vaccine” policy may be the creation of many enlisted members speaking out as whistleblowers.
Will the prospect of being coerced into having an experimental injection, known to alter DNA/cause injury and death, ensure continued loyalty to their “superiors”?
Or, alternatively, will military personnel be compelled to stand up for the truth and align themselves with defending essential liberty?

I certainly hope you are on-target about “unintended consequences”, Lisa.

Quit troops…take a dishonorable discharge. Your life is worth fighting for…unless you want to become a transhuman blend of organic brain with mechanized A.I. body under the control of the Masters of Doom for eternity.

I’d get out.
You’re better off fighting for America as a civilian at this point.
The gene therapy shots will ruin any chances of you ever having a normal
family life…forever.

[…] Read more: US Army Is Preparing For Mandatory ‘Covid’ Shots For Troops […]

To American Amy soldiers — REFUSE! AND GET THE ‘F’ OUT OF THERE! When you are in the military you have no rights or did you not know that? You belong to them. Fight these technocratic predators and their Totalitarian politicos in the USA from civilian clothes. You are needed on the outside. To the UK soldiers — You’ve let your country go so far down the rabbit hole of fear and apathy that domination appears to be all that is left for your people. You still live under a monarchy in every lock-tugging, ‘may-I-have-another-please’ way. Too, too sad. You’ve… Read more »

[…] Read more: US Army Is Preparing For Mandatory ‘Covid’ Shots For Troops […]

U.S. Army Is Preparing For Mandatory COVID Shots For Troops – Kindly Wake The Hell Up