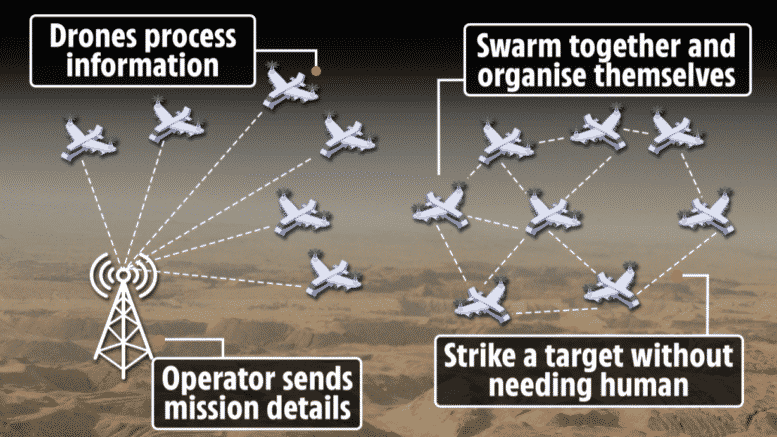 Please Share This Story!
PDF 📄
The global arms race for autonomous killer drones is officially on with the first use of such weapons systems by Israel. Even three years ago, world governments foolishly assured us that such technology would be absolutely off limits. We knew better and warned that it was coming soon. That day has now arrived. ⁃ TN Editor

Israel used the first ever drone swarm deployed in battle to hunt down Hamas terrorists, it was reported.

The drones have no human input but instead link together using artificial intelligence to seek out their targets.-

Hamas began firing rockets into Israel after protests by Palestinians in May, prompting an 11 day conflict in which 256 people were killed in Gaza and 13 in Israel.

During the violence the Israeli military says that more than 4,300 rockets were fired from Gaza towards towns and cities.

Israel retaliated with air strikes and artillery but didn’t deploy ground forces in its battle with the terrorists.

Arthur Holland of the United Nations Institute for Disarmament Research said that “if confirmed, they are certainly a notch up in the incremental growth of autonomy and machine-to-machine collaboration in warfare”.

Drones have previously been directed by a single operator who ‘fly’ the aircraft from a remote base.

But in recent years, militaries have been working on developing Artificial Intelligence that allows the drones to work together without the need for an operator.

he basic idea of a drone swarm is that its machines are able to make decisions among themselves.

The swarm continue its mission, even if loses some drones during its mission.

The machine learning system is fed with data sourced from satellites, other reconnaissance drones, and aerial vehicles, as well as intelligence collected by ground units.

I see nothing there suggesting any fully automated system is killing anyone, blowing anything up, or making a decision to do either of those.

From the source “During operations in Gaza in mid-May, the Israel Defense Forces (IDF) used a swarm of small drones to locate, identify and attack Hamas militants. This is thought to be the first time a drone swarm has been used in combat.”

And who controls nearly all drones worldwide? Oooh, bad foul.

Shit they can’t even get a drone to deliver groceries yet so I think this is all hyped B.S.

Elle
Reply to  Brett A Gleason

REALLY hope you are correct.

So science fiction becomes reality– “Captain America: The Winter Soldier”. Now we can ALL be identified, targeted and murdered by the planet’s elitist mob of predators. And the beat goes on…