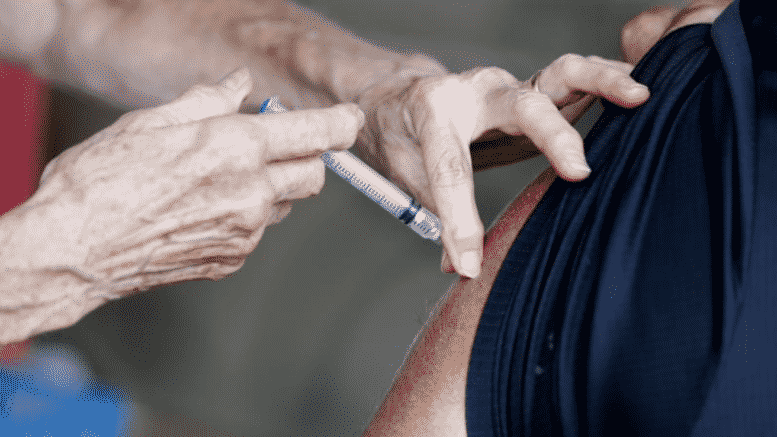 Please Share This Story!
PDF 📄
When Technocrat health officials run out of arguments to persuade citizens to take the experimental gene therapy injections, they resort to bully tactics and Ad hominem attacks. Vaccine critics are simply told to “Shut up!” as they are smeared as “deep vaccine resistance” that let the Delta variant into the state. ⁃ TN Editor

One Missouri hospital official is telling anyone making disparaging remarks about the COVID-19 vaccine to “Shut up” as state officials ask for federal help dealing with a surge in cases that has some counties urging new precautions.

“If you are making wildly disparaging comments about the vaccine, and have no public health expertise, you may be responsible for someone’s death. Shut up,” tweeted Steve Edwards, who is the CEO of CoxHealth in Springfield.

CoxHealth and the city’s other hospital, Mercy Springfield, were treating 168 COVID-19 patients Friday, up from 31 on May 24, before the surge began, said Aaron Schekorra, a spokesman for the Springfield-Greene County Health Department. He said that 36 of them were on ventilators.

Erik Frederick, the chief administrative officer of Mercy Springfield, also turned to Twitter in an effort to bolster vaccinations, noting that they prevent deaths.

“So if you’re vaccinated there is a light at the end of a tunnel,” he said. “If you’re unvaccinated that’s probably a train.”

State data shows that 44.6% of residents have received at least one shot, far short of the 54.7% rate nationally. And in more than 60 Missouri counties, less than 30% of the population had received their first shot, according to state data.

The situation has grown so dire that Missouri health officials announced Thursday that they were asking for federal help from newly formed surge response teams.

Meanwhile, St. Louis and St. Louis County health departments along with health officials in Jefferson County begged even immunized people to resume mask-wearing in public, citing the threat of the delta variant.

The Jefferson County Health Department’s advisory said children are being exposed to COVID-19 as they resume normal activities without protection. During the last two weeks, the number of new cases had increased 42%, with the highest number of cases among 10– to 19-year-olds.

“This is concerning,” the advisory said, “since most of that age group is eligible for the vaccine, but only 10.82% have completed the full series of vaccination.”

Hi Patrick is CEO Steve Edwards a Physician and has he submitted a Physician Warranty of Vaccine Safety to verify the vaccines are safe? Is he aware of the Nuremberg Code? http://www.cirp.org/library/ethics/nuremberg/
http://www.senc.us/PhysiciansWarranty.html

The vaccine didnt help the Isralies against the Delta strain. lul
I miss the lockdowns, we should reinstitue those measures again, not because it would have any effect, but it was quite an enjoyable expierence. I cant wait to see what occurs within this decade. /(⊙)\ ♤ =)

Since they never even isolated the Covid19 virus and the PCR positive “cases” have turned out to be mostly false positives according to CDC finally admitting this; I want to know by what means are they identifying the so called Delta strain? Where’s the proof? How do we know this is not the VACCINATED being exposed to the WILD virus and having cytokine storms that kill them like the monkeys,ferrets and lab rats in every mRNA study in past decades?

“Deep vaccine resistance has allowed the delta variant, first identified India, to take hold in the state, straining hospitals, particularly in the Springfield area.” Why has this been inserted? This is an unproven assertion.

“If you are making wildly disparaging comments about the vaccine, and have no public health expertise, you may be responsible for someone’s death. Shut up,” tweeted Steve Edwards, who is the CEO of CoxHealth in Springfield. Love the usual words for “I’m lying because I have an agenda,” “you MAY be responsible”, it MIGHT happen, it COULD be. FEAR FEAR FEAR PORN. Taking lessons from the MSM Mr. CEO of CoxHealth in Missouri? The gene therapy you so forcefully insist on calling a vaccine does not work and is NOT a vaccine–PERIOD. Take a look at the UK numbers today… Read more »

Why should we believe anything medical professionals say after 2020? The year nurses learned elaborate dances to perform for Tiktok while dancing around all those empty beds? They make $$$$$$ claiming car accident victims died of Covid and saying their empty hospitals are packed. BTW. ventilators are bad for Covid victims. But the $$$$$$ no doubt refuses to cover treatments that work. Doctor$ love their $weet, $weet kickback$. I noticed these guys are big hits on Twitter. Owned by technocrats running with Klaus Schwab’s narrative. As he states in his book Covid 19 and the Great Reset. If your doctor… Read more »

I wonder how many of the sick are vaccinated. It’s happening, the break-through infections, but they’ll never admit it, just say “shut up” to those that speak up again. The vaxed are not protected. If they were, why are they told to wear masks again whenever there is a surge?

This is why I’ll never trust the Big Medical Industry, every again