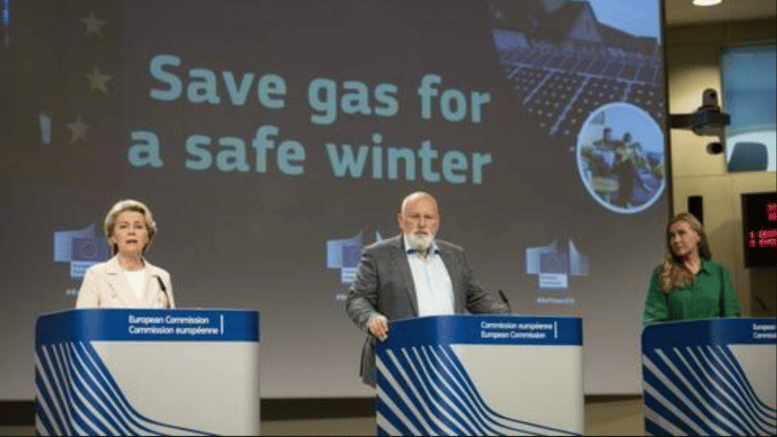 Please Share This Story!
PDF 📄
This article exemplifies the outcome of the UN’s war on energy, and Europe is going to experience the full effect of it with a cold winter, high energy prices and restricted food intake. There is NO shortage of energy anywhere on earth. All shortages are driven by the disingenuous policies of 2030 Agenda and sustainable development, aka Technocracy. Technocracy’s war on humanity is intensifying but is still not recognized by the vast majority of citizens who are affected by it.

Meanwhile, the U.S. Secretary of Transportation claims that the pain of high gas prices is a benefit to accelerate the green transition.

Biden Transportation Sec. Pete Buttigieg: “The more pain we are all experiencing from the high price of gas, the more benefit there is for those who can access electric vehicles” pic.twitter.com/yAFl23ULXw

The European Commission on Wednesday asserted “there is no reason to believe this pattern will change” regarding diminishing Russian natural gas flows ahead of winter, issuing a new sweeping plan in a press communique that calls on member states to immediately and ‘voluntarily’ slash gas consumption.

It proposes a significant cut in gas consumption by 15% over the next eight months, and will require drastic action across industries, power producers and even citizens in their households, according to Bloomberg.

The EU executive noted that initial cuts would be voluntary cuts; however, in an unprecedented proposal the Commission has requested that in the scenario of an EU-wide alert “when there is a substantial risk of a severe gas shortage or an exceptionally high demand of gas occurs, which results in a significant deterioration of the gas supply situation” – that it possess the power to impose mandatory reductions.

The “Save gas for a safe winter” communique is introduced by blaming and condemning the Kremlin’s “weaponisization of gas exports”, per the document:

The European Union faces the risk of further gas supply cuts from Russia, due to the Kremlin’s weaponisation of gas exports, with almost half of our Member States already affected by reduced deliveries. Taking action now can reduce both the risk and the costs for Europe in case of further or full disruption, strengthening European energy resilience.

The Commission is therefore proposing today a new legislative tool and a European Gas Demand Reduction Plan, to reduce gas use in Europe by 15% until next spring. All consumers, public administrations, households, owners of public buildings, power suppliers and industry can and should take measures to save gas. The Commission will also accelerate work on supply diversification, including joint purchasing of gas to strengthen the EU’s possibility of sourcing alternative gas deliveries.

As for the proposed “right” to declare a union-wide alert which would trigger mandatory powers exercised by the European executive, this language is contained in the following section:

The Union Alert can be triggered when there is a substantial risk of a severe gas shortage or an exceptionally high gas demand. Member States should update their national emergency plans by the end of September to show how they intend to meet the reduction target, and should report to the Commission on progress every two months. Member States requesting solidarity gas supplies will be required to demonstrate the measures they have taken to reduce demand domestically.

The extraordinary measures (and powers apparently being claimed and adopted by Brussels) come amid what one analyst cited in Bloomberg has called possibly Europe’s “greatest energy crisis in its history” – also as the fate of Nord Stream 1 to Germany’s near and future term operationality remains unclear.

And it’s looking to last not just this upcoming winter, but years, as Bloomberg’s Javier Blas points out, “The European Commission is not only warning about gas supply this coming winter, but also flagging problems for the 2023-24 winter (the reason is that if you draw all your stocks this winter, you are in trouble for the next one).”

Putin is in on it i believe. They are all working together.