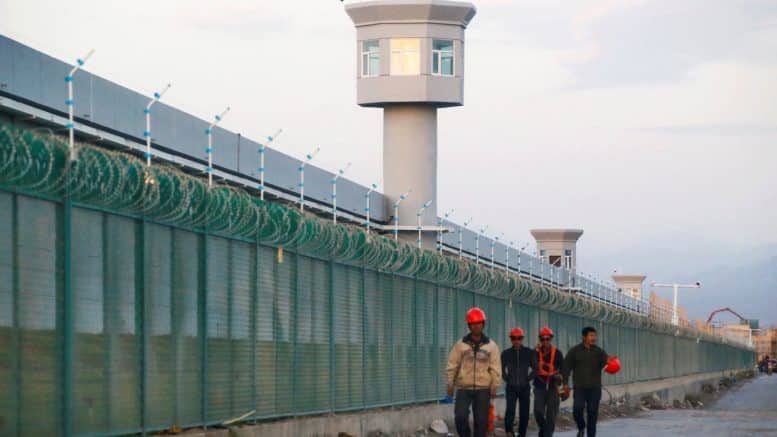 In a classic case of Orwell’s Doublethink, China’s concentration camps are re-labeled as counter-terrorism and de-radicalization centers that make people happy and secure. This is Technocrat madness that defies any rational explanation. ⁃ TN Editor

A group of 54 United Nations members issued a statement Tuesday defending China for building over 1,000 concentration camps to imprison, torture, indoctrinate, rape, and kill Muslims, crediting the camps with building “a stronger sense of happiness” in the country.

Belarus, often considered the last dictatorship standing in Europe, delivered the statement on behalf of the China-allied nations at the General Assembly in response to a group statement condemning China’s human rights atrocities.

China has built hundreds of concentration camps in western Xinjiang province – home to the nation’s Muslim Uyghur ethnic minority – since late 2017, which it has used to imprison up to 3 million Uyghurs, Kazakhs, and Kyrgyz Muslims. Survivors of the camps, mostly Kazakhs or Uyghurs married to foreign nations who appealed abroad for their freedom, say they were subject to forced sterilization and beatings, forced to memorize Communist Party propaganda songs, affirm their loyalty for dictator Xi Jinping, and serve as sex slaves for guards at the camps. Some also accused China of using the prisoners for slave labor to manufacture products sold in, among other places, the United States.

The Chinese government published the favorable statement in full.

“Faced with the grave challenge of terrorism and extremism, China has undertaken a series of counter-terrorism and deradicalization measures in Xinjiang, including setting up vocational education and training centers,” Belarus said, using China’s preferred term for the concentration camps. “The past three consecutive years has [sic] seen not a single terrorist attack in Xinjiang and people there enjoy a stronger sense of happiness, fulfillment and security.”

Despite the Chinese regime severely limiting the entry of foreigners or other Chinese people from elsewhere in the country into Xinjiang, the note said the countries “appreciate China’s commitment to openness and transparency,” referencing a staged “media access” tour China organized for the state media of various friendly countries.

The statement concluded by condemning those standing up for human rights and demanding they “refrain from employing unfounded charges against China based on unconfirmed information before they visit Xinjiang,” which they cannot do freely.

The statement followed an attack against human rights defenders in July by a coalition of countries with deep business ties to China for demanding accountability on the Xinjiang camps.

Belarus has a longstanding human rights record that the United Nations defined as “fundamentally poor” in July. It has only ever had one president since achieving independence from the Soviet Union. pro-Russia autocrat Alexander Lukashenko. Among the human rights crimes Lukashenko stands guilty of are the arbitrary arrest and silencing of journalists and dissidents and widespread regulations on speech and assembly.

Belarus is an “important” partner to China’s Belt and Road Initiative (BRI), according to Beijing. The BRI is a sprawling infrastructure project nominally meant to expand modern transportation to connect Beijing to Western Europe. In reality, China has used the BRI to hand out predatory loans to developing countries, many of which then embezzle the money and leave the government deeply in debt. China then takes ownership of key properties in those countries, expanding its political reach.

I have the honor to make the following joint statement on behalf of 54 countries including Pakistan, the Russian Federation, Egypt, Bolivia, Democratic Republic of the Congo, and Serbia.

We reiterate that the work of Human Rights in the United Nations should be conducted in an objective, transparent, non-selective, constructive, non-confrontational and non-politicized manner. We express our firm opposition to relevant countries’ practice of politicizing human rights issues, by naming and shaming, and publicly exerting pressures on other countries.

We commend China’s remarkable achievements in the field of human rights by adhering to the people-centered development philosophy and protecting and promoting human rights through development. We also appreciate China’s contributions to the international human rights cause.

We take note that terrorism, separatism and religious extremism has caused enormous damage to people of all ethnic groups in Xinjiang, which has seriously infringed upon human rights, including right to life, health and development. Faced with the grave challenge of terrorism and extremism, China has undertaken a series of counter-terrorism and deradicalization measures in Xinjiang, including setting up vocational education and training centers. Now safety and security has returned to Xinjiang and the fundamental human rights of people of all ethnic groups there are safeguarded. The past three consecutive years has seen not a single terrorist attack in Xinjiang and people there enjoy a stronger sense of happiness, fulfillment and security. We note with appreciation that human rights are respected and protected in China in the process of counter-terrorism and deradicalization.

We appreciate China’s commitment to openness and transparency. China has invited a number of diplomats, international organizations officials and journalist to Xinjiang to witness the progress of the human rights cause and the outcomes of counter-terrorism and deradicalization there. What they saw and heard in Xinjiang completely contradicted what was reported in the media. We call on relevant countries to refrain from employing unfounded charges against China based on unconfirmed information before they visit Xinjiang. We urge the OHCHR, Treaty Bodies and relevant Special Procedures mandate holders to conduct their work in an objective and impartial manner according to their mandate and with true and genuinely credible information, and value the communication with member states.