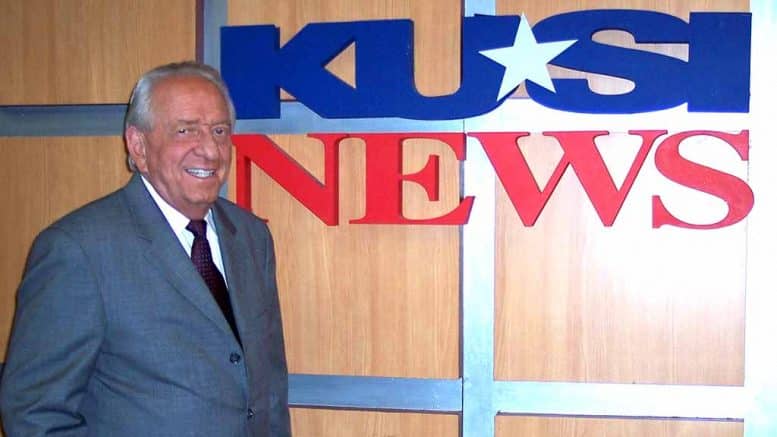 Al Gore says the science of global warming is settled, but the founder of the hugely successful Weather Channel, John Coleman, says Gore absolutely wrong and his science is fake. The world will not listen to credentialed experts like Coleman, Willie Soon, Lord Christopher Monckton, Dr. Istvan Marko and thousands of other climate scientists who say the same thing about Gore. ⁃ TN Editor

John Coleman says Al Gore started it — the “global warming silliness.” But now the retired weatherman and founder of The Weather Channel is “horrified” to see San Diego Mayor Kevin Faulconer channeling the ex-veep with a Climate Action Plan. It “just turns my stomach.”

“I think he saw money and power, and I don’t know what else he thought of it,” Coleman says of the Republican mayor. “I can’t believe he really [felt he] was going to save the city from some terrible fate.”

Coleman, 82, laughs during a lively phone chat from his home near Las Vegas.

“San Diego’s not going to go underwater. Period,” he says. “Not in my lifetime or yours or our kids’ lifetime. When the Earth ends in 4 1/2 billion years, it probably still won’t have flooded.”

He also mocks “the damn tsunami warning route signs that they put up all over the city,” which he calls “about as silly as anything I’ve ever saw in my life. The chance of a significant tsunami hitting Southern California is about as great as a flying saucer landing tonight at Lindbergh Field. It’s just sheer nonsense.”

Coleman also knows how many people regard his decade-old public arguments. As sheer nonsense.

“I’m just a dumb old skeptic — a denier as they call me — who ought to be jailed or put to death,” he says. “I understand how they feel. But you know something? I know I’m right. So I don’t care.”

That’s clear from his Twitter feed, “climate frenzy” blog and occasional political activism — he made hundreds of phone calls (reading a script) urging votes for Donald Trump during the primaries.

“I went to the opening of the Trump campaign headquarters in Nevada, and that sort of thing,” he says of the man who labels climate change a hoax. “I went to one of his rallies.”

Coleman aims to expose what he calls “Algorian” scientists fudging data and taking billions in government research grants for the sake of career advancement and economic comfort.

At KUSI-TV in San Diego, with financial backing from the Republican McKinnon family, Coleman hosted two hour-long documentaries critical of the notion of manmade climate change. He did many news pieces.

Coleman calls global warming a scientific issue, not a political one. “But since it had become a political issue, [Michael D. McKinnon] strongly supported my skeptical position on global warming,” he says. “If it hadn’t been for that, I probably would have retired much sooner. [KUSI] gave me a great platform from which to work.”

How did Coleman go from the clowning meteorologist of ABC’s “Eyewitness News” in Chicago to the Kay-YOOOOOUUUU-Es-Eye crusader against “the greatest scam in history”?

Coleman also points to Gore’s Oscar-winning “An Inconvenient Truth” of 2006. “I think the Al Gore movie probably stimulated me more than anything,” he now says. “I’m happy to see that his new movie seems to be less than spectacular success.”

But the seeds were planted decades before Coleman’s 2007 manifestos.

In January 2010, responding to an “Other Side” broadcast on KUSI but not using Coleman’s name, research professor emeritus Richard Somerville of the Scripps Institution of Oceanography issued a 550-word, six-point “Response to Climate Change Denialism.”

In July 2014, John P. Reisman offered a line-by-line rebuttal to Coleman’s arguments in “The Amazing Story Behind the Global Warming Scam.”

Coleman went on several national shows after his April 2014 exit from KUSI, including Fox News (with Megyn Kelly) and CNN (with Brian Stelter), to make his case.

But Coleman confessed to Times of San Diego that his TV turns are drying up.

He says a CBS production company contacted him about an interview for an hourlong TV show.

“And we talked and talked and everything was scheduled,” Coleman says. “And then two days before the shoot was to occur, they called and said, ‘Sorry, we have to cancel that. Thank you very much anyway.’

Said Coleman: “That happens all the time.”

Coleman doubles down: “I understand that there are plenty of people who rip me to shreds, and you can find strong and powerful put-downs on every topic I’m talking about. … But the truth is that I know all about all that stuff, and I don’t give a rat’s ass, because I know I’m right.”

One of the rare logical, truth loving and no nonsense human being in this crazy, “want-to-control-you world”!
Hat off for Mister Coleman who, if it helps, is not alone in his conviction about the “Global Warming”-business. AFter all, Veepee Al Gore become a multimillionaire out of this climate-change nonsense business.

“Climate Change” is a ruse. But a ruse covering what ? Obviously, extreme weather events are increasing in frequency and magnitude. The ruse is to cover the fully deployed weather modification-control-weaponization programs. These programs use three (main) components: 1.) Water vapor produced by (mainly) power plants. Using Wet Surface Air Coolers (WSAC) technology trillions of gallons are daily released into the climate system. These are easily and empirically observable. 2.) Also clearly observable (although more & more stealthily so) are the introduction of conductive “Welsbach Materials” into the atmosphere; i.e. “chemtrails”. 3.) The not so visibly observable component are the… Read more »

Stephen suggested, “Obviously, extreme weather events are increasing in frequency and magnitude.”
I see no evidence supporting that claim in the scientific literature. Please provide a link to the published scientific research papers which have demonstrated your statement to be true.

https://youtu.be/QaLCeYuNxU0
… start there… it’s everywhere in the literature.

I don’t think John Coleman denies climate change. In fact, other than “A Disgrace to the Profession” Mann and a few other flakes, I don’t think anyone denies that climate has been changing and profoundly so, since the beginning of the earth’s history.
Rather, I believe that Coleman is suggesting that mankind has little if any, control over the climate. Likely, he is quite correct as there has been no scientific evidence whatsoever to the contrary.

You cannot be “sceptical” or “deniar” or have “my opinon” or “consensus” about an equation.