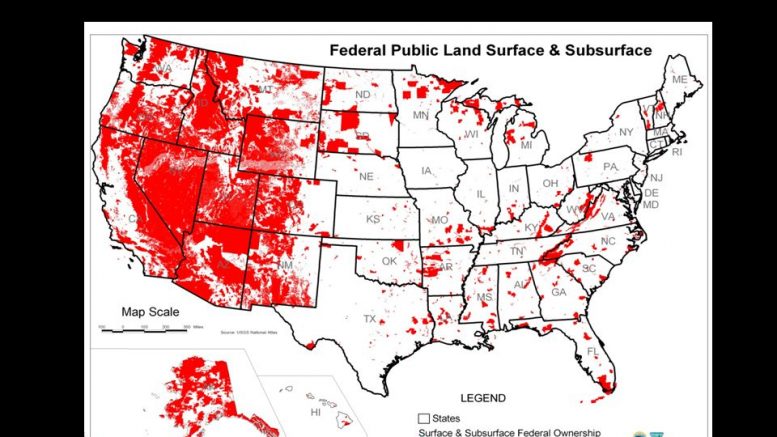 TN has long claimed that the real end-game of Technocracy is the global elite capturing the major resources of the planet, all of which is represented by land: mining, forestry, agriculture, coal, oil, natural gas, etc. Sustainable Development, aka Technocracy, is 100% anti-property rights and would have all people owning nothing. ⁃ TN Editor

That house you live in, the car you drive, the small (or not so small) acreage of land that has been passed down through your family or that you scrimped and saved to acquire, whatever money you manage to keep in your bank account after the government and its cronies have taken their first and second and third cut…none of it is safe from the government’s greedy grasp.

At no point do you ever have any real ownership in anything other than the clothes on your back.

Everything else can be seized by the government under one pretext or another (civil asset forfeiture, unpaid taxes, eminent domain, public interest, etc.).

The American Dream has been reduced to a lease arrangement in which we are granted the privilege of endlessly paying out the nose for assets that are only ours so long as it suits the government’s purposes.

And when it doesn’t suit the government’s purposes? Watch out.

Under such a fascist regime, the Fifth Amendment to the U.S. Constitution, which declares that no person shall “be deprived of life, liberty, or property, without due process of law; nor shall private property be taken for public use, without just compensation,” has become yet another broken shield, incapable of rendering any protection against corporate greed while allowing the government to justify all manner of “takings” in the name of the public good.

Relying on the U.S. Supreme Court’s 2005 ruling in Kelo v. City of New London, entire neighborhoods have been seized and bulldozed to make way for shopping malls, sports complexes and corporate offices.

Indeed, little has prevented the government from bulldozing its way through the Fifth Amendment in an effort to take from the middle and lower classes and fatten the coffers of the corporate elite.

All across the country, power companies have been given the green light to build massive gas and oil pipelines that crisscross the country, cutting through private and public lands, as well as unspoiled wilderness.

“Yet despite oft-repeated claims by politicians and oil executives about the danger of relying on foreign oil, this U.S. petroleum renaissance never was designed to make America energy self-sufficient,” points out journalist Sandy Tolan. “A growing amount of that oil will end up in China, Japan, the Netherlands, even Venezuela.”

So much for the public use, huh?

Some of the protesters are landowners, simple farmers and homeowners who merely want the government and its corporate partners-in-crime to keep their grubby paws off their personal property.

In Virginia, for instance, activists have taken to tree sitting—living for weeks on end in platforms suspended above the ground in trees—as a form of protest over the devastation that is being wrought by these pipelines.

These acts of civil disobedience come at a costly price.

Pipeline and forestry officials have been working hard to make life as difficult as possible for the protesters, allegedly blocking their access to food and water and medical supplies, shining floodlights into the trees at all hours of the night, creating ground disturbances to dislodge their nests, and urging the courts to levy heavy fines for each day that the work to clear the forests for the pipeline is delayed.

Here’s what one resident of Roanoke, Va., wrote to me about the manner in which the Mountain Valley Pipeline is being inflicted on his community:

Our small community has been invaded by private security and a fully militarized local police department. Mountain Valley Pipeline has begun cutting trees and has brought in private military contractors similar to what was used in North Dakota. They are basically using the power of government to steal this land for private profit. The residents and land owners of Bent Mountain now find themselves subject to arrest for walking in their own driveway, taking pictures of the pipeline companies ever-changing survey lines and path of destruction, or in more than one case, for confronting MASKED ARMED MEN ON THEIR PROPERTY IN THE DEAD OF NIGHT. One of my neighbors was accosted on his own back porch by police for photographing the MVP surveyors continually moving the corridor of their easement. I have even had armed private security trespassing on my property miles away in neighboring Floyd County.

It takes a lot of gall to trespass onto someone’s private property, tear up their land, cut down their trees, pollute their air and water, prevent them from moving freely on their own property, threaten them with fines and arrests for challenging the intrusion, and then force them to pay (by way of taxes) to retain ownership of the property or sell it cheaply or at a loss so it can be torn down and used for some purpose that the government deems more beneficial to its bottom line.

That’s how little respect the government has for our rights.

[…] To read how land in Virginia is being taken through eminent domain to create a public-private partnership click on this link. […]