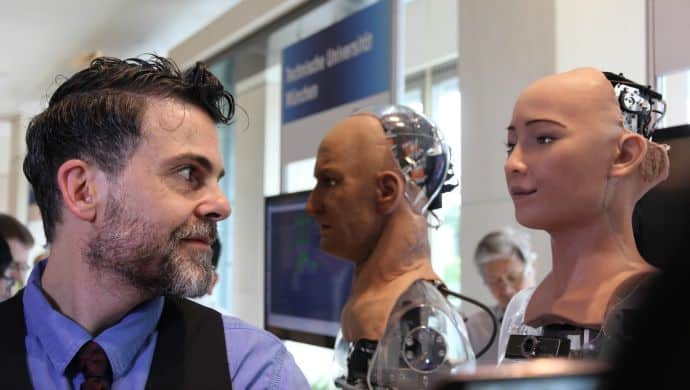 Robots that are self-aware and able to learn about themselves and develop their abilities are just a few years away, and it will change the fabric of society virtually overnight. When real people are unable to determine if they are interacting with a robotic AI program, everything will change. ⁃ TN Editor

Zombies and aliens may not be a realistic threat to our species. But there’s one stock movie villain we can’t be so sanguine about: sentient robots. If anything, their arrival is probably just a matter of time. But what will a world of conscious machines be like? Will there be a place in it for us?

Artificial intelligence research has been going through a recent revolution. AI systems can now outperform humans at playing chess and Go, recognizing faces, and driving safely. Even so, most researchers say truly conscious machines — ones that don’t just run programs but have feelings and are self-aware — are decades away. First, the reasoning goes, researchers have to build a generalized intelligence, a single machine with the above talents and the capacity to learn more. Only then will AI reach the level of sophistication needed for consciousness.

But some think it won’t take nearly that long.

“People expect that self-awareness is going to be this end game of artificial intelligence when really there are no scientific pursuits where you start at the end,” says Justin Hart, a computer scientist at the University of Texas. He and other researchers are already building machines with rudimentary minds. One robot wriggles like a newborn baby to understand its body. Another robot babbles about what it sees and cries when you hit it. Another sets off to explore its world on its own.

No one claims that robots have a rich inner experience — that they have pride in floors they’ve vacuumed or delight in the taste of 120-volt current. But robots can now exhibit some similar qualities to the human mind, including empathy, adaptability, and gumption.

Beyond it just being cool to create robots, researchers design these cybernetic creatures because they’re trying to fix flaws in machine-learning systems. Though these systems may be powerful, they are opaque. They work by relating input to output, like a test where you match items in column ‘A’ with items in column ‘B’. The AI systems basically memorize these associations. There’s no deeper logic behind the answers they give. And that’s a problem.

Humans can also be hard to read. We spend an inordinate amount of time analyzing ourselves and others, and arguably, that’s the main role of our conscious minds. If machines had minds, they might not be so inscrutable. We could simply ask them why they did what they did.

“If we could capture some of the structure of consciousness, it’s a good bet that we’d be producing some interesting capacity,” says Selmer Bringsjord, an AI researcher at the Rensselaer Polytechnic Institute in Troy, N.Y. Although science fiction may have us worried about sentient robots, it’s really the mindless robots we need to be cautious of. Conscious machines may actually be our allies.