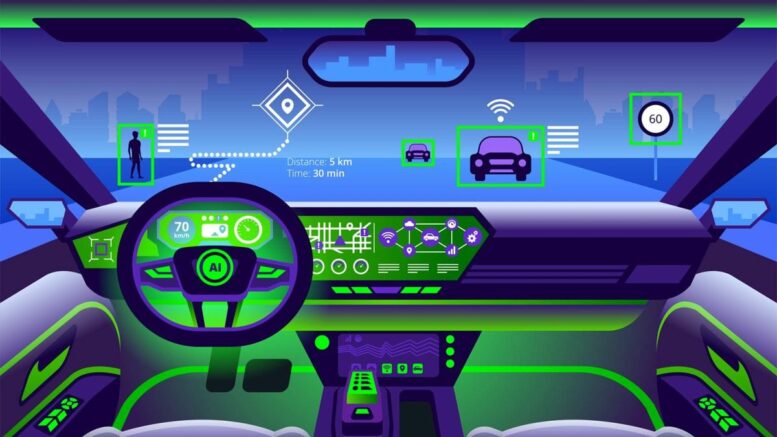 Please Share This Story!
PDF 📄
Do you want a government controlled kill switch in your car? It’s for your safety, they say. It will help them keep drunk drivers off the road, they say. It may be used if you are not paying attention to the road, like texting or playing games on your smart phone. It may track your location 24×7. Wow, it’s just like having a Technocrat in every car. ⁃ TN Editor

“A psychotic world we live in. The madmen are in power.”—Philip K. Dick, The Man in the High Castle

If we haven’t learned by now, we should beware of anything the government insists is for our own good.

Given the deteriorating state of the nation’s infrastructure (aging highways and bridges, outdated railways and airports, etc.), which have been neglected for years in order to fund America’s endless wars abroad, it would seem like an obvious and long overdue fix.

Yet there’s a catch.

Tucked into the whopping $1 trillion bipartisan spending bill is a provision requiring automakers to prescribe a “federal motor vehicle safety standard for advanced drunk and impaired driving prevention technology, and for other purposes.”

As Jason Torchinksky writes for Jalopnik:

It’s pretty clear that the goals of this section of the law are to reduce drunk driving fatalities and crashes via still-undetermined technological tools that somehow are able to “passively monitor the performance of a driver of a motor vehicle to accurately identify whether that driver may be impaired,” and/or “passively and accurately detect whether the blood alcohol concentration of a driver of a motor vehicle is equal to or greater than the blood alcohol concentration described in section 163(a) of title 23, United States Code,” and if either or both of these conditions are proven to be positive — if the car thinks you’re drunk, then it may “prevent or limit motor vehicle operation.”

As expected, the details are disconcertingly vague, which leaves the government with a wide berth to sow the seeds of mischief and mayhem. For instance, nowhere does the legislation indicate how such a so-called “kill switch” would work, what constitutes a driver who is “impaired,” and what “other purposes” might warrant the government using such a backdoor kill switch.

Everything about this mandatory measure should set off red flares. First, use of the word “passively” suggests the system will always be on and constantly monitoring the vehicle. Secondly, the system must connect to the vehicle’s operational controls, so as to disable the vehicle either before driving or during, when impairment is detected. Thirdly, it will be an “open” system, or at least one with a backdoor, meaning authorized (or unauthorized) third-parties can remotely access the system’s data at any time.

This is a privacy disaster in the making, and the fact that the provision made it through the Congress reveals — yet again — how little its members care about the privacy of their constituents… The lack of ultimate control over one’s vehicle presents numerous and extremely serious safety issues… If that is not reason enough for concern, there are serious legal issues with this mandate. Other vehicle-related enforcement methods used by the Nanny State, such as traffic cameras and license plate readers, have long presented constitutional problems; notably with the 5th Amendment’s right to not self-incriminate, and the 6th Amendment’s right to face one’s accuser.

Once again, the burden of proof is reversed, and “we the people” find ourselves no longer presumed innocent until proven guilty but suspects in a suspect society.

These “vehicle kill switches” may be sold to the public as a safety measure aimed at keeping drunk drivers off the roads, but they will quickly become a convenient tool in the hands of government agents to put the government in the driver’s seat while rendering null and void the Constitution’s requirements of privacy and its prohibitions against unreasonable searches and seizures.

Indeed, when you think about it, these vehicle kill switches are a perfect metaphor for the government’s efforts to not only take control of our cars but also our freedoms and our lives.

For too long, we have been captive passengers in a driverless car controlled by the government, losing more and more of our privacy and autonomy the further down the road we go.

Just think of all the ways in which the government has been empowered to dictate what we say, do and think; where we go; with whom we associate; how we raise our families; how we live our lives; what we consume; how we spend our money; how we protect ourselves and our loved ones; and to what extent our rights as individuals can be displaced for the sake of the so-called greater good.

In this way, we have arrived, way ahead of schedule, into the dystopian future dreamed up by such science fiction writers as George Orwell, Aldous Huxley, Margaret Atwood and Philip K. Dick.

In keeping with Dick’s darkly prophetic vision of a dystopian police state—which became the basis for Steven Spielberg’s futuristic thriller Minority Report, which was released 20 years ago—we have been imprisoned in a world in which the government is all-seeing, all-knowing and all-powerful, and if you dare to step out of line, dark-clad police SWAT teams and pre-crime units will crack a few skulls to bring the populace under control.

Incredibly, as the various nascent technologies employed and shared by the government and corporations alike—facial recognition, iris scanners, massive databases, behavior prediction software, and so on—are incorporated into a complex, interwoven cyber network aimed at tracking our movements, predicting our thoughts and controlling our behavior, Spielberg’s unnerving vision of the future is fast becoming our reality.

Surveillance cameras are everywhere. Government agents listen in on our telephone calls and read our emails. Political correctness—a philosophy that discourages diversity—has become a guiding principle of modern society.

The courts have shredded the Fourth Amendment’s protections against unreasonable searches and seizures. In fact, SWAT teams battering down doors without search warrants and FBI agents acting as a secret police that investigate dissenting citizens are common occurrences in contemporary America.

We are increasingly ruled by multi-corporations wedded to the police state. Much of the population is either hooked on illegal drugs or ones prescribed by doctors. And bodily privacy and integrity has been utterly eviscerated by a prevailing view that Americans have no rights over what happens to their bodies during an encounter with government officials, who are allowed to search, seize, strip, scan, spy on, probe, pat down, taser, and arrest any individual at any time and for the slightest provocation.

We’re on the losing end of a technological revolution that has already taken hostage our computers, our phones, our finances, our entertainment, our shopping, our appliances, and now, our cars. As if the government wasn’t already able to track our movements on the nation’s highways and byways by way of satellites, GPS devices, and real-time traffic cameras, performance data recorders, black box recorders and vehicle-to-vehicle (V2V) communications will monitor our vehicle’s speed, direction, location, gear selection, brake force, the number of miles traveled and seatbelts use, and transmit this data to other drivers, including the police.

In this Brave New World, there is no communication not spied upon, no movement untracked, no thought unheard. In other words, there is nowhere to run and nowhere to hide.

Every new piece of technologically-enabled gadget we acquire and technologically-boobytrapped legislation that Congress enacts pulls us that much deeper into the sticky snare.

These vehicle kill switches are yet another Trojan Horse: sold to us as safety measures for the sake of the greater good, all the while poised to wreak havoc on what little shreds of autonomy we have left.

As I make clear in my book Battlefield America: The War on the American People and in its fictional counterpart The Erik Blair Diaries, we’re hurtling down a one-way road at mind-boggling speeds to a destination not of our choosing, the terrain is getting more treacherous by the minute, and we’ve passed all the exit ramps.

From this point forward, there is no turning back, and the signpost ahead reads “Danger.”

Time to buckle up your seatbelts, folks. We’re in for a bumpy ride.

I’m sick of all their safety crap. Riding mower driving backwards kill switch, coffee makers shut off by itself, electric skillet that won’t heat up to a decent heat, seat belts that automatically lock you in, vehicles that lock automatically when you get in. Vehicles locking you out! Cameras in appliances, and laptops, and smart tv’s. Black boxes, toxic nonflammable p.j.’s, fake food for your health, the list goes on and on.

@justsaying. I take it you live in America? I’ve never seen any of these things. Do you actually have them, or are they just coming? I can’t even imagine them. I’ve got a vintage VW camper van that just goes along at its own pace, and a lovely vintage open sports car. None of those gadgets could be fitted into them.😁😂 lol.😆

Government abuses would be endless.