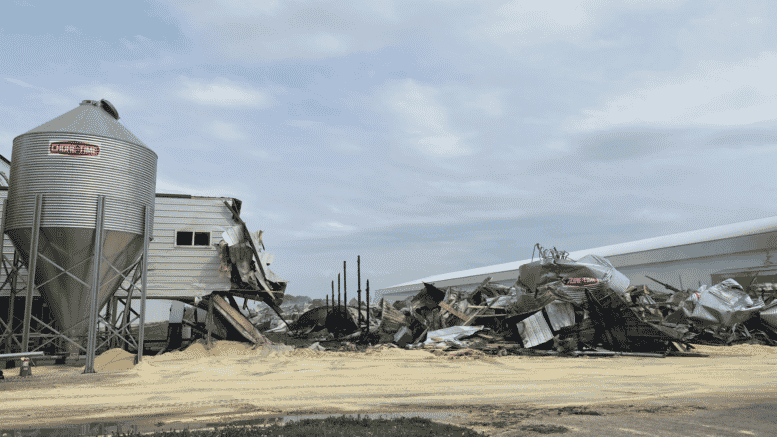 Please Share This Story!
PDF 📄
Another large egg producer was ravaged by fire, further reducing food stocks and driving up prices on remaining capacity. Whatever the reason, people across the nation are wondering why over 15 (so far) plants have been burned down in 2022. Personally, I do not remember a time in history where so much damage was done to a single industry in such a short period of time. ⁃ TN Editor

Cleanup is underway at Forsman Farms in Howard Lake after a fire on Saturday night.

According to the Wright County Sheriff’s Office, crews responded to the scene off Highway 12 around 10 p.m.

Sgt. Troy Wachter told KARE 11 the fire destroyed a poultry building with an estimated 200,000 chickens inside.

Forsman Farms spokesperson Jon Austin said they do not have a firm number yet but they’re estimating at least tens of thousands of chickens were killed, up to a couple hundreds of thousands. Some chickens in adjacent buildings were also affected, mostly from smoke inhalation.

Eddie Olson was having a bonfire in his backyard, about six miles away in Cokato, when he started hearing sirens.

“I’m a SKYWARN spotter so I do a lot of radio communications and stuff and this is one of maybe 50 radios I have. I just grabbed one and heard that they were dispatching other departments. So I knew it was big,” Olson said.

Olson filmed video at the scene of the fire.

“It’s a lot of chickens. It’s a hit to the egg market, it’s people’s jobs, it’s a local community. So any time anything big like that happens, it’s not good,” Olson said.

A Wright County egg producer is evaluating the damage left behind from a Saturday night fire. A Forsman Farms spokesperson said they do not have a firm number yet but he estimates at least tens of thousands of chickens were killed. https://t.co/JPkqaQqO6Y @kare11 pic.twitter.com/51F8gE4oea

Patrick Wood is a leading and critical expert on Sustainable Development, Green Economy, Agenda 21, 2030 Agenda and historic Technocracy. He is the author of Technocracy Rising: The Trojan Horse of Global Transformation (2015) and co-author of Trilaterals Over Washington, Volumes I and II (1978-1980) with the late Antony C. Sutton.
Subscribe
34 Comments
Oldest
Newest Most Voted
Inline Feedbacks
View all comments

These are not coincidences. As the frightening saying goes: control the food supply. Control the people.

I’ve noticed there is never any follow up on these incidences from MSM. I suspect these are mostly arson. There have been too many for it to be just random “accidents”.

I have also been wondering, why we haven’t seen any investigations?

Same reason there was on investigation to the Seth Rich murder, and no autopsy on Judge Scalia or the recent Sgt at Arms in the Senate

You didn’t answer your own question. Are you going to follow up on this story??? Very important to all of us who like our bacon and eggs.

IS THERE ANY NEWS REPORTS ON ANY INVESTIGATION? SHOULDN’T THIS ATTRACT THE ATTENTION OF THE FBI? ANY STATEMENT FROM THEM?

OUR FBI? They probably set the damn fire.

Using laser technology which could be planted in space

One of the reasons Americans are so oblivious to their own destruction is because they believe in judeo-masonic nonsense like outer space.

But easily could be drones up in the stratosphere atomospehere.. lol high altitude… I’m thinking that is how they start those forest fires too.

You came up with this theory yourself? No!!people are asleep because they believe MSM, and these people are every color and religion.

I hope you don’t Prep Sport!

Thanks for the article. I am one who was suspicious of these fires but didn’t want to flat out state anything incorrectly. The problem is, unless you can find articles like the one you shared, we are left to our own imaginations and people notoriously think of the negative. The main stream media is also doing a disservice by not reporting what your article has.

You have to be an idiot if you believe this article. You’re just scared and psychologically convincing your self otherwise. Also, snopes is a bias as hell wesbite.

[…] Who Is Burning Down America’s Food Processing Plants? […]

Who Is Burning Down America’s Food Processing Plants? – David Icke

[…] Read More: Who Is Burning Down America’s Food Processing Plants? […]

Who Is Burning Down America’s Food Processing Plants?

So WHO is BURNING these processing plants down? Is anyone investigating this? How is anyone not being fingered for these arsons? Again, is anyone INVESTIGATING? Never seems so….are the farmers receiving kickbacks for allowing their plants to be destroyed? Are these big operations owned by big corporations who are deliberately setting fires to their own busniesses?

This is the 22 OR MORE Facilities that have Burned down. Propane Tanks Explode all the TIme, Don’t they?? They are Killing Chickens, Turkeys, Pigs, Cattle because a FEW, 1% were SICK with Bird Flu or Swine Disease? So rather than isolate those that ARE sick, they have been Killing Millions upon Millions of animals. Brazil will only take HALF of it Wheat, Corn, Bean production this year. Hold on to your Hat, this Summer-Fall will be BAD!!

Why only burn 1 of the chicken houses?

I think we need to learn to freeze-dry eggs.

Who Is Burning Down America’s Food Processing Plants? – Kon/Spira[l]

[…] Another large egg producer was ravaged by fire, further reducing food stocks and driving up prices on remaining capacity. Whatever the reason, people across the nation are wondering why over 15 (so far) plants have been burned down in 2022. Personally, I do not remember a time in history where so much damage was done to a single industry in such a short period of time. — Weiterlesen http://www.technocracy.news/who-is-burning-down-americas-food-processing-plants/ […]

We’re under attack! We should immediately deploy National Guard to defend our critical food infrastructure assets. Citizen militias should help with armed patrols and video surveillance. How many more must burn before we take action?

How many coincidences before they’re not coincidences anymore.. This is government terrorism, all apart of the “build back better” plan. You’ll have no choice to get that digital ID including the 6th,7th, whatever booster in order to get your government hand out. Unless you want to starve. These ppl working at these plants NEED to be investigated. …

Who Is Burning Down America’s Food Processing Plants? – Infinite Unknown

The Gateway Pundit has documented 97 food processing plants shut down by fires and other events.

If I were a Governor, I would get some undercover military/cops to keep an eye on the infrastructure that is left in my state. I would make sure to CATCH whoever is doing this and get their story out.

This has all been planned from the start to drive up prices and fear in the American people orchestrated by the government Bill Gates George Soros and the Democratic/Socialist/Marxist party. WAKE UP AMERICA YOUR BEING LED TO THE SLATER

[…] Who Is Burning Down America’s Food Processing Plants? […]

It seems that a big one just went up in flames in France.
https://www.bitchute.com/video/DVmv4QVUG5JN/