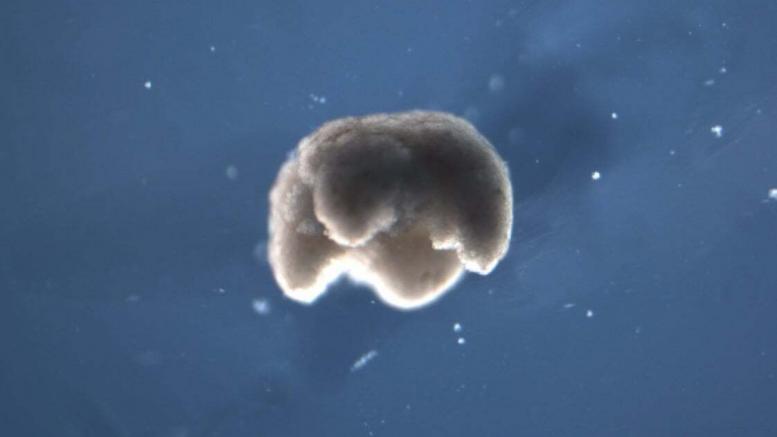 Please Share This Story!
PDF 📄
Xenobots represent a new life form and proof of concept. Initially, stem cells from frogs have been used, but stem cells from any living organism, including humans, could potentially achieve the same results. An ethical battle is certain. ⁃ TN Editor

Be warned. If the rise of the robots comes to pass, the apocalypse may be a more squelchy affair than science fiction writers have prepared us for.

Researchers in the US have created the first living machines by assembling cells from African clawed frogs into tiny robots that move around under their own steam.

One of the most successful creations has two stumpy legs that propel it along on its “chest”. Another has a hole in the middle that researchers turned into a pouch so it could shimmy around with miniature payloads.

“These are entirely new lifeforms. They have never before existed on Earth,” said Michael Levin, the director of the Allen Discovery Center at Tufts University in Medford, Massachusetts. “They are living, programmable organisms.”

Roboticists tend to favour metal and plastic for their strength and durability, but Levin and his colleagues see benefits in making robots from biological tissues. When damaged, living robots can heal their wounds, and once their task is done they fall apart, just as natural organisms decay when they die.

Their unique features mean that future versions of the robots might be deployed to clean up microplastic pollution in the oceans, locate and digest toxic materials, deliver drugs in the body or remove plaque from artery walls, the scientists say.

“It’s impossible to know what the applications will be for any new technology, so we can really only guess,” said Joshua Bongard, a senior researcher on the team at the University of Vermont.

The robots, which are less than 1mm long, are designed by an “evolutionary algorithm” that runs on a supercomputer. The program starts by generating random 3D configurations of 500 to 1,000 skin and heart cells. Each design is then tested in a virtual environment, to see, for example, how far it moves when the heart cells are set beating. The best performers are used to spawn more designs, which themselves are then put through their paces.

Because heart cells spontaneously contract and relax, they behave like miniature engines that drive the robots along until their energy reserves run out. The cells have enough fuel inside them for the robots to survive for a week to 10 days before keeling over.

The scientists waited for the computer to churn out 100 generations before picking a handful of designs to build in the lab. They used tweezers and cauterising tools to sculpt early-stage skin and heart cells scraped from the embryos of African clawed frogs, Xenopus laevis. The source of the cells led the scientists to call their creations “xenobots”.

Trying to prove evolution will not work, because it’s a great big lie. ‘(Jesus) who is the image of the invisible God, the firstborn of every creature: For by Him were all things created, that are in heaven, and that are in earth, visible and invisible, whether thy be thrones, or dominions, or principalities, or powers: all things were created by Him, and for Him.’ Colossians 1:15-16.