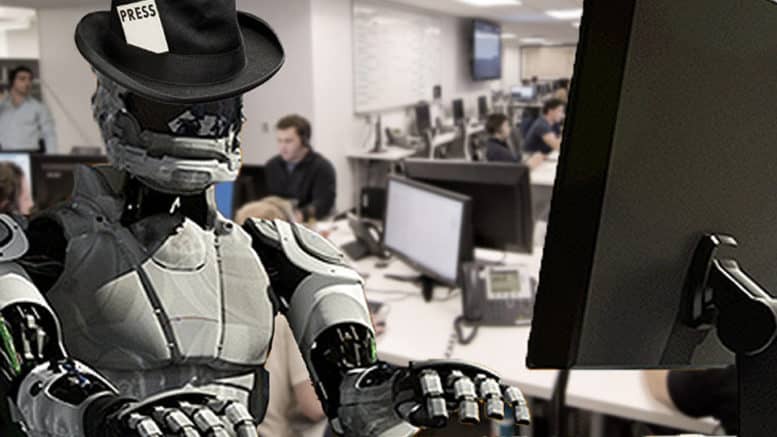 Please Share This Story!
PDF 📄
If words are a medium of creative human communication, how can an inhuman AI computer program add to knowledge? The answer is that it cannot, and in fact, it dumbs it down. Why should “artificial” replace the real thing? ⁃ TN Editor

As reporters and editors find themselves the victims of layoffs at digital publishers and traditional newspaper chains alike, journalism generated by machine is on the rise.

Roughly a third of the content published by Bloomberg News uses some form of automated technology. The system used by the company, Cyborg, is able to assist reporters in churning out thousands of articles on company earnings reports each quarter.

The program can dissect a financial report the moment it appears and spit out an immediate news story that includes the most pertinent facts and figures. And unlike business reporters, who find working on that kind of thing a snooze, it does so without complaint.

Untiring and accurate, Cyborg helps Bloomberg in its race against Reuters, its main rival in the field of quick-twitch business financial journalism, as well as giving it a fighting chance against a more recent player in the information race, hedge funds, which use artificial intelligence to serve their clients fresh facts.

“The financial markets are ahead of others in this,” said John Micklethwait, the editor in chief of Bloomberg.

In addition to covering company earnings for Bloomberg, robot reporters have been prolific producers of articles on minor league baseball for The Associated Press, high school football for The Washington Post and earthquakes for The Los Angeles Times.

Examples of machine-generated articles from The Associated Press:

Last week, The Guardian’s Australia edition published its first machine-assisted article, an account of annual political donations to the country’s political parties. And Forbes recently announced that it was testing a tool called Bertie to provide reporters with rough drafts and story templates.

As the use of artificial intelligence has become a part of the industry’s toolbox, journalism executives say it is not a threat to human employees. Rather, the idea is to allow journalists to spend more time on substantive work.