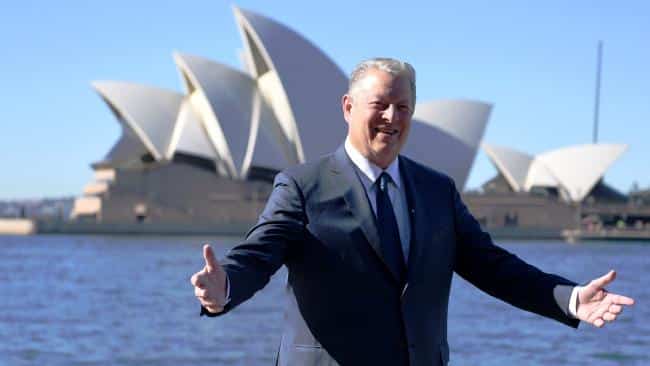 Former US vice president Al Gore was recently in Sydney to promote his documentary An Inconvenient Sequel: Truth to Power. (Pic: AAP/Keri Megelus)

Al Gore is a two-bit con-man who has made his fortune using extreme fear and public manipulation, but many are seeing through the huckster’s scam. And, if Al Gore is a willful liar, what does that say about his ‘settled science’ of climate change? His idea of ‘settled’ is whether or not the funds reached his bank account or not. ⁃ TN Editor

“I feel so scared” he wails, before vision of solicitous uncle Al patting his hand in an attempt to soothe away his fears of the apocalypse.

Scaremongering is what Gore does best, and fear is the business model that has made him rich, though his every apocalyptic scenario has failed to materialise.

In Australia last week to spruik his upcoming movie An Inconvenient Sequel, the former US vice president tried it on again, claiming Mother Nature was “screaming” and the world would ­descend into “political disruption and chaos and diseases, stronger storms and more ­destructive floods” unless we buy his snake oil.

They haven’t learned the lesson from SA’s extreme green experiment with renewable energy that has produced nothing but crippling blackouts and the highest electricity prices in the world.

Any normal person with such a woeful record of accuracy as Gore would be ashamed to show his face. Eleven years after his Inconvenient Truth movie scared little kids witless, his warnings of climate armageddon have come to nothing.

“Unless we take drastic measures the world would reach a point of no return within 10 years,” he told us then. Wrong. In fact the world has just been through almost 20 years in which there has been a hiatus in global warming, even as carbon dioxide has increased: an “inconvenient pause” as some wags put it.

Around the world people are waking up to the fact that their leaders have been crying wolf, while their electricity bills go through the roof.

Australia’s prosperity is built on the reams of cheap, abundant fossil fuel under our feet, and yet green zealots have forced us into an energy crisis.

But when Liberal backbencher Craig Kelly last week pointed out the logical fact that Australians will die because of high power bills, he was slammed as a “scaremonger” by the very people who worship at Al Gore’s feet.

Yes, cold kills, and electricity prices have doubled in the past decade, as uncertainty plagues the energy sector, and cheap coal-fired power is priced out of the market by government subsidies for unreliable renewable energy production.

The states, which bear much of the blame, continue with the fantasy that you can replace coal with wind and solar while simultaneously banning the development of onshore gas fields.

The iron-clad law of ­energy supply is that more ­renewables force out baseload power, which you need when the sun doesn’t shine and the wind doesn’t blow.

Yet SA is pretending that the world’s biggest battery built at huge taxpayer expense by another global green huckster, Elon Musk, is going to save the day.

The diabolic task facing federal Energy Minister Josh Frydenberg is to wrangle agreement on something approaching a rational energy policy out of the recently ­released Finkel Review.

Ironic how an overweight pet poodle can quickly learn to mimic his master:
https://www.youtube.com/watch?v=xat9xSos_7g