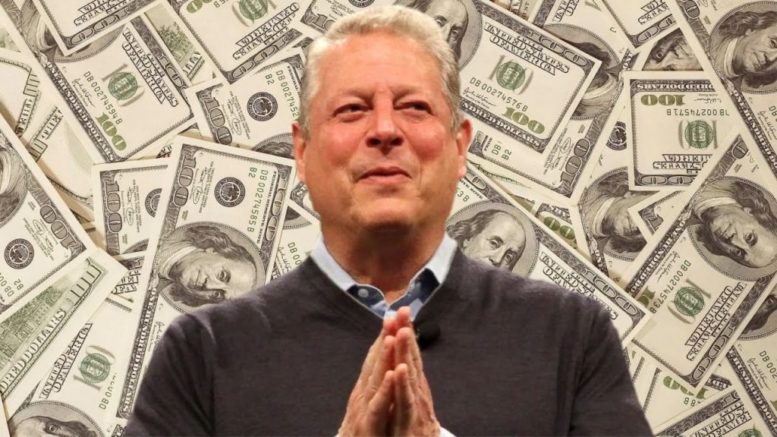 Please Share This Story!
PDF 📄
Al Gore has promoted the snake-oil of global warming hysteria in order to increase his own wealth by hundreds of millions of dollars. The only solution offered was Sustainable Development, aka Technocracy or Green Economy.  ⁃ TN Editor 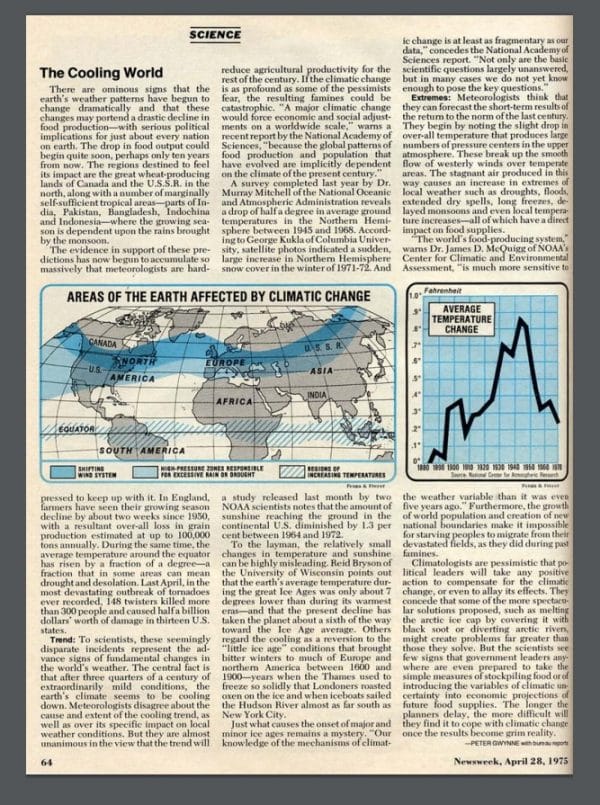 In 1975, Newsweek magazine published an article in which they sounded the alarm bell and proposed solutions to deliberately melt the ice caps:

“Climatologists are pessimistic that political leaders will take any positive action to compensate for the climatic change, or even to allay its effects. They concede that some of the more spectacular solutions proposed, such as melting the arctic ice cap by covering it with black soot or diverting arctic rivers, might create problems far greater than those they solve. But the scientists see few signs that government leaders anywhere are even prepared to take the simple measures of stockpiling food or of introducing variables of climate uncertainty into economic projections of future food supplies.”

This sounds very similar to today’s proposed solution of putting particles in the atmosphere to deflect the sunlight to reduce global warming.  Indeed,

TIME magazine’s January 31, 1977, cover featured the cover story, “The Big Freeze.” They reported that scientists were predicting that Earth’s average temperature could drop by 20 degrees fahrenheit. Their cited cause was, of course, that humans created global cooling. Then suddenly the climate cycles shifted and it began to warm up.

Al Gore came to the rescue. Global cooling meant that government should stockpile food for everyone, but that would cost money. Switching to global warming would create a different agenda that they were familiar with. Like smoking, they could tax it to HELP people. Of course, when they did stop and tax revenues began to decline, they introduced taxes on e-cigarettes and didn’t try to deter people from smoking.

With global warming, they could tax everyone for things they did every day from driving a car to heating and cooling their homes. Suddenly, global warming was a lot more profitable for government than global cooling. The alarm bell stopped ringing that warned of a continued global cooling, seen between 1945 and 1968, that was creating a new Ice Age.

Al Gore took the position of Vice President under President Bill Clinton. In that capacity, with Bill Clinton chasing women, Hillary became the de facto President and Al Gore was given free rein. No other Vice President enjoyed that power until Dick Cheney under George Bush, Jr.

Gore set out to enact policies that would alter government and our future by placing humankind in harm’s way. Gore directed all funding to ensure that the climate change agenda became a top priority for the United States Government. Gore created the President’s Council on Sustainable Development. The Charter was revised on April 25, 1997, and the “Scope of Activities” was dramatically altered. Gore directed that the agenda was to be EXCLUSIVELY a global warming agenda to reduce greenhouse gas emissions. He claimed there would be NO DEBATE regarding the science behind the new agenda. Gore deliberately silenced all opposition.

The President’s Council on Sustainable Development was to focus EXCLUSIVELY on reducing greenhouse gas emissions by adopting the U.S. economy to his agenda. The Council shifted from economic development to environmental development even though it would reduce economic development. Gore flipped the purpose of the Council to a global warming and then set about his agenda to create a crisis to increase government control and power. That can only happen when there is a crisis, which Gore then manufactured.

To pull off the new agenda, Gore’s strategy set out to purge the government of anyone who disagreed or opposed his agenda in any way. He instilled, not the fear of God, but the fear of Gore throughout the high-ranking government officials in the agencies that included the Department of Energy, Environmental Protection Agency, National Science Foundation, Department of Education, National Oceanic and Atmospheric Administration, and National Aeronautics and Space Administration. Their funding would be cut unless they adopted Gore’s agenda.

Beware of anything mentioning “Sustainability”. If it’s not purposefully being used as a leftist totalitarian buzzword, it’s being used by some unsuspecting tool who has heard it so often it’s wormed it’s way into their lexicon.
BTW, what happened to the looming New Ice Age they were whining about in the 60s?
As I type this, it’s 54 degrees in SoCal. 10:15 PST. Brrr.
(I know, given my fur I shouldn’t be cold, but I’ve become acclimatized.)