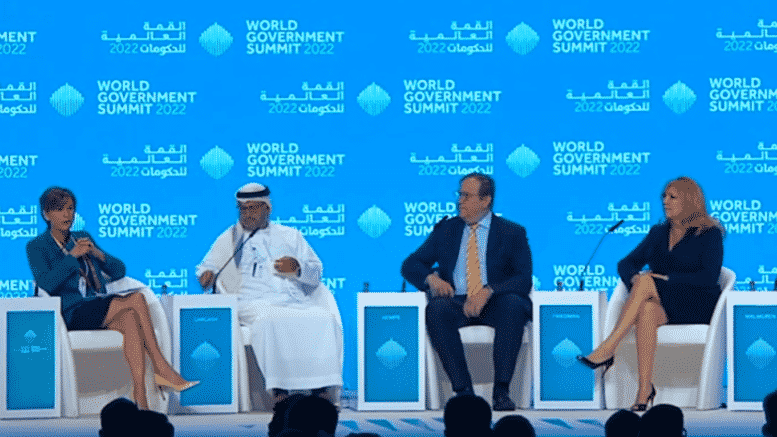 Please Share This Story!
PDF 📄
As I have said for several years now, obsessing over the dollar losing reserve status is a waste of time; that all fiat currencies will be ripped out of existence at the same time; that Technocrats will institute a centralized, all-knowing digital currency to control everything. Nobody believed me then, but will you now?

This is the most important story you will read in the decade of the 20s. This global insider lets the cat out of the bag: “We are about to abandon the traditional system of money and accounting and introduce a new one.” ⁃ TN Editor

The World Government Summit is underway this week in Abu Dhabi and we’ve already got a bombshell to report.

Dr. Pippa Malmgrem, a top American economist who served as a special adviser to former President George W. Bush, made a statement that confirms everything myself and others have been reporting for quite some time – that a cashless society is looming right around the corner.

Listen to her comments in the video clip below.

Pippa Malmgren, Economist At The World Government Summit 2022
She states her belief that the world financial system is about to switch accounting systems & digital money. Not decentralized cryptos, but centralized CBDCs (central bank digital currency) pic.twitter.com/yu7cTuGdh8

“We are on the brink of a dramatic change where we are about to, and I’ll say this boldly, we are about to abandon the traditional system of money and accounting and introduce a new one. And the new one; the new accounting is what we call blockchain… It means digital, it means having an almost perfect record of every single transaction that happens in the economy, which will give us far greater clarity over what’s going on.”

Who is Pippa Malmgren? She is a globalist and an elitist. Her father was an adviser to Richard Nixon and she has advised presidents and prime ministers around the world. One of her favorite topics over the last two years has been “The Upside of COVID,” if that provides any clues to her worldview.

Dr. Malmgren brings simple sensemaking to the complexities of the world economy, geopolitics and technology. She’s advised Presidents and Prime Ministers, co-founded an award-winning tech firm, worked in finance and asset management and served as a judge in The Queen’s Enterprise Awards competition and as a regulator of technology standards.

She has lectured at Sandhurst, Duke Fuqua GEMBA, INSEAD, UT Austin and Tsinghua University in Beijing.

This new money system Malmgren talks about with such enthusiasm will not only be digital, it will be centralized and it will be programmable. Do not confuse it with Bitcoin or other crypto currencies. The only thing it will share in common with other crypto is that it will be based on blockchain technology.

So what do I mean by “programmable” money?

This means the central banks will have complete control over your money and will be able to program it so that it can only be spent on certain things or in certain places. For example, have you purchased too many guns or too much ammunition over the past month? Maybe you indulged in too much frivolous travel and blew through too much gasoline? The government could easily have your money reprogrammed to limit future purchases of such taboo items. The possibilities are endless.

What’s the bottom line? Once we get digital programmable money, where and how you will be “allowed” to spend your money will depend on your social credit score.

This money will be linked to everyone’s personal digital identity. The digital ID marks the other pillar of the new digital economy that they haven’t really told you about yet. But if you read their documents at the World Economic Forum, you know it’s coming.

Pippa Malmgren is warning us. That system is at the door. And once it’s here, it marks the beginning of the end because nobody will be allowed to buy or sell without becoming a digitized, hybrid human being. I believe it will be possible for us to live outside this system for a while, but we need a plan, a network. We will need to live in community with like-minded refusniks.

The vast majority of people will walk blindly into this digital trap being set by the power elites, only to regret it later. They will lose all autonomy over their bodies, having to submit to endless booster shots, as well as over their minds. Independent critical thinkers will be banned from the system. Traditionally minded Christians and Jews will be banned. Why? Because free thought is not allowed. They talk about diversity and inclusion but that is a euphemism for a society based on total information domination, where you must not only follow but celebrate whatever lie of the day is being promoted in the mainstream corporate media and on social media.

Have you “done your part” to defeat the latest virus by getting vaccinated?

Do you “stand with Ukraine”?

Do you believe that it’s impossible to define what makes a woman a woman?

Do you believe that Biden was legitimately elected and that elections are still “free and fair” in your country?

These are just a few of the items on the litmus test of the New World Order.

Get ready to resist and prepare yourself to live outside the system. One day you may even be faced with martyrdom for your faith.

They’ve told us what they are going to do. Are you listening?

What more do we need to know?

And Just Like That, All The Fiat Currencies Simply Vanished - Wild Sage News

More articles on various blogs are exposing this here are several more: https://collapse.news/2022-03-16-beware-governments-push-for-a-digital-currency.html# https://leohohmann.com/2022/03/31/bombshell-video-economist-at-world-government-summit-says-new-financial-world-order-about-to-shift-in-dramatic-new-direction/com This plan is tyranny and would make life not worth living for normal thinking people. This agenda is closer than we think. Majority people lack critical thinking ability and they just don’t care about anything incl their family. Churches don’t expose it because they are part of the globalist plan to keep people ignorant and entertained (social clubs).

“What more do we need to know?” NOTHING. This is a war for the soul of man, a war between good and evil. STAND AND DELIVER!

And Just Like That, All The Fiat Currencies Simply Vanished – The Sad Reality

I did not know there was a World Government Summit. This is the twilight zone that we are living in. The Wizards of Oz have spoken but I know none of these unelected non-humans that decides what kind of poison is available, and how fast and how many are going to perish as everything they say is based on illusion and nothing of fact. This organization needs to be exposed like so many others and they all say the same lies and Pollyanna impossibilities that they are going to fabricate, that of which has no basis in science, math or… Read more »

Global Noahide Laws are Jewish (Zionist?), so why would Jews be banned? Or are they? Christianity will be banned as idolatry. Or will it? Perhaps the religion of technocracy & Noahidism might be something you could explore…

Karen – read my reply to Bryce. Don’t overthink the issue when there are plain answers in plain sight.

“Traditionally minded Christians and Jews will be banned.” Why would Jews be banned? They are anti-Christ and whether they are Zionist zealots or not they reject Christ just the same as the rest of the world. Satan is quite pleased to have them as part of his inner circle. You don’t believe that anti-Christ Jews have separate salvation outside Christ do you? Its during Jacob’s Trouble that 90% of anti-Christ Jews will be destroyed and finally the remaining 10% will bow a knee to the Messiah Jesus Christ.

“Why would Jews be banned?” Paul, the better question is why were Jews killed in Nazi Germany? Anti-Semitism has nothing to do with politics or religious belief. Satan would kill all Jews if he could, which would invalidate God’s promise of national salvation during the millennial kingdom. The same is true for Christians, if they could all be killed.

You are right that “Satan would kill all Jews if he could.” And the Cabal worships Satan.

Charly – You can choose to be an atheist and not believe in God, but if you are wrong, you will lose everything. If I am wrong, I will lose nothing.

Patrick, I have one word for you:
AMEN!
🙏

Dear Pippa, please fuck off and die. Gold and silver are real money; everything else is fraud and slavery. I for one REJECT your digital slave matrix!

Sorry people, but the underground won’t stand for such a thing. People will always require an amount of cash for ’emergency funds’, tips, and private sales at various stalls and markets where haggling is the ‘norm’, and sometimes electronic transactions are just impossible to access. The ONLY reason this farcical exercise has begun, is because of central banks and private banks being caught with their pants down, having FRAUDULENT Money Contracts, and not having authority to ‘move’ Money or issue Credit. Customers are discovering the Fraud, with the evidence brought before a court of ‘competent’ jurisdiction, and with banks found… Read more »

The war in Ukraine seems to be helping the World Economic Forum to advance several of its Great Reset goals – a coincidence theory, or something deliberately planned? Vladimir Putin pursues self-interest, but is his self-interest best advanced by representing the people of Russia or by representing the goals of Klaus Schwab at the World Economic Forum? What can’t be ignored is Putin’s decision to suspend US dollar payments for Russia’s oil and gas. Personally, I think it’s amazing that the MSM are not covering the likely consequences for the West, for the reasons I explain here https://www.youtube.com/watch?v=XPgHpW_hroY&t=1s

Please post another link to your information. Smart people no longer use YT and haven’t for a very long while. If you use YT you should STOP. There are plenty of other choices that post the same information and do not feed the beast. Yes, I think the Ukrainian war is a false-flag set-up which has been deliberately planned with the side benefit of increasing the death toll for the globalists via the Ukrainian people. So sad for them to be living under a Nazi regime aided by globalist wealth. Putin is a BIG bud of Klaus Schwab’s, although that… Read more »