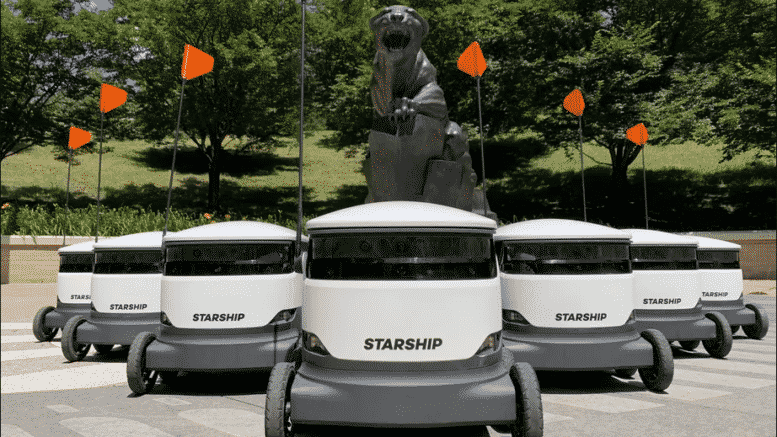 Please Share This Story!
PDF 📄
Students rejoice! Pizza delivered to your door by robot that you don’t need to tip. Starship assumes that this will really work, but they face a mountain of problems, including vandalism. ⁃ TN Editor

The quintessential college experience of getting pizza delivered to your dorm room is about to get a high-tech upgrade. On Tuesday, Starship Technologies announced its plan to deploy thousands of its autonomous six-wheeled delivery robots on college campuses around the country over the next two years, after raising $40 million in Series A funding.

It’s a big step for the San Francisco (née Estonia)-based startup and its robots, which have been tested in over 100 cities in 20 different countries, traveled 350,000 miles, crossed 4 million streets, and just marked the milestone of completing its 100,000th delivery. College campuses, with their abundance of walking paths, well-defined boundaries, and smartphone-using, delivery-minded student bodies, are an obvious place for Starship to stake out the next phase of its business.

The company is working closely with the administrations of each college where it intends to launch. It started at George Mason University and Northern Arizona University, and it will be followed in September by the University of Pittsburgh and the Purdue University in Indiana. Starship plans to deploy 25–50 robots at each campus over the next 24 months, which means there could be upwards of 5,000 robots puttering around these schools by 2021.

Each robot is electric, has a trunk that can fit about 20 pounds of cargo, and has a suite of cameras around the outside that can be used to identify obstacles and help guide the robot to its destination. They have a delivery radius of three to four miles and can travel a maximum speed of 4 mph, which is obviously slower than a delivery by a human on a bike or in a car. Starship CEO Lex Bayer says the robot’s ability to work for many hours without a break is what gives it an advantage.

“There’s also no guilt or shame,” Bayer says. “You can order whatever you want, whenever you want. And you don’t have to worry about another student who you’re sending around to do this pick up for you. It’s just a robot who’s going to deliver it to you.”

The robots can climb curbs but not stairs, which may limit their appeal to customers who live in multistory buildings. Bayer says this is why Starship is targeting markets that are less dense with lower heights. But he also speculates that if robot delivery takes off, building owners may eventually decide to include a separate door just for the robots, much like cat owner would include a door flap for their pet. “Definitely possible in the future,” he opines.

Starship makes money by charging customers $1.99 per order. It also has contracts with the universities and restaurants it delivers for, but Bayer says Starship can be more profitable than rival, human-powered (and heavily subsidized) delivery services like DoorDash and Postmates.

“It’s a really tough business from these other companies to run,” he said. “I think what they’ve really proven is that consumers want deliveries, they love the convenience, but actually getting the business model to work is really complicated and questionable. On the other hand, we’re using autonomous technology to do this. It’s a completely different approach.”