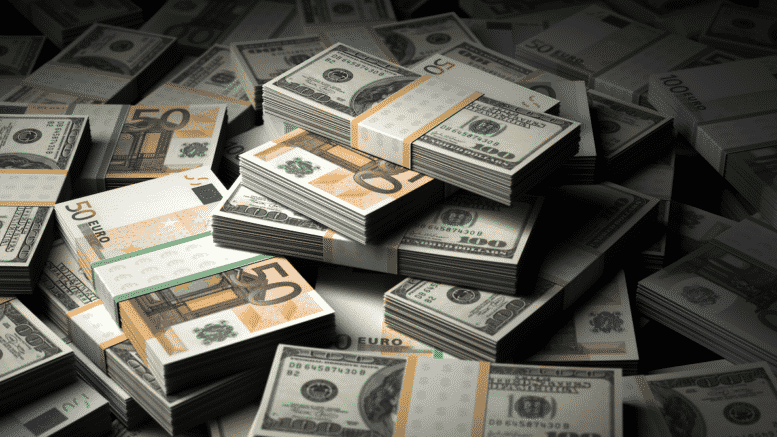 Please Share This Story!
PDF 📄
Technocrats at Big Pharma have stuck their giant proboscis into the public treasury and are sucking it dry in order to fund and promote their own domination of public health. The object is to manipulate everyone into taking their untested vaccines, regardless of the negative health effects on millions. ⁃ TN Editor

The White House is pouring taxpayer money into free advertising for a booming and liability-free vaccine industry,1 which doesn’t seem quite right. Since the beginning of human existence, greed has played a central role in the corruption of man.

The phrase “follow the money” was popularized in the film, “All the President’s Men,” a docudrama about the break-in at the Watergate office building and the subsequent political scandal that ultimately brought down the presidency of Richard Nixon.2

The movie, based on the nonfiction book by Carl Bernstein and Bob Woodward, suggests that by following the money, political corruption will be exposed. In the past 18 months, there’s been so much money promised, allocated, provided and spent in relation to the COVID pandemic that it’s difficult to tease out the origins.

In January 2021, the Department of Health and Human Services9 announced $22 billion to support expanded testing and vaccine distribution. In March 2021, the White House announced10 they would spend another $10 billion to expand access to vaccines and “build confidence” in them in designated areas.

In the CDC announcement they said the money would fund “innovative partnerships with community-based organizations to increase vaccine uptake.”13 This begs the question, hasn’t there been enough free publicity in the news and on television about the pandemic and the “need” for vaccination to return to “normal”?14,15

The advertisements were played on network TV and cable throughout April 2021 in English and Spanish in the hope they would reduce vaccine hesitancy as “skepticism about the vaccines also remains high.”16 Yet, as the National Vaccine Information Center points out, you only have to turn on the evening news on any major television network in the U.S. to see one long COVID vaccine commercial.

As Jeffrey Zients, White House COVID-19 response coordinator, commented in a press briefing about the $3 billion being used to bolster information about the COVID vaccine in communities, “Building vaccine confidence and increasing access to vaccination is central to our efforts.”17

At the beginning of the pandemic, major drug companies were funded with taxpayer dollars to develop COVID vaccines to the tune of over $9 billion.18 They were then handed a liability shield,19 which ensured if the product did not work or a person were hurt by using it, the company was shielded from any lawsuits.

In other words, the vaccine industry was given billions of dollars to develop a vaccine, then shielded from any liability if their vaccines didn’t work or if they hurt people. Next, the government poured billions more taxpayer dollars into advertising those vaccines and spreading information that might help people to decide to get the vaccines.

It is important to note that the government is providing the vaccine free of charge to you regardless of your health insurance status.20 FiercePharma21 reported in February 2021 that the cost to the government per dose for COVID-19 vaccines was:

So, added to the billions already given to the vaccine companies to develop the vaccine, free advertising for their product through the news media and billions poured into increasing access to their product — plus additional paid ad campaigns — all paid for by the government, vaccine companies are now charging the government for each individual dose they deliver. This may make the COVID-19 vaccine the best return on investment for drug development and sale in history.

But the amount of money, time and effort being poured into vaccinating as many people as possible in the shortest time possible doesn’t stop there. In early April 2021, the Department of Health and Human Services22 launched a grassroots ad campaign for the COVID vaccine industry called the COVID-19 Community Corps.

This is a group of leaders within communities that “people know and trust,”23 whose goal is to encourage Americans to get vaccinated. The group was invited to:24

“… receive timely, accurate information to share with your family, friends, and neighbors. By encouraging them to get vaccinated, you’ll help protect them – and allow all of us to safely gather together again.”

The New York Times25 reported that 275 organizations had signed up for the COVID-19 Community Corps by mid-May 2021, including the Catholic Health Association, the North American Meat Institute and NASCAR.

It’s expected that many of the Catholic and evangelical groups will work at a community level to address the concerns surrounding the use of abortion-derived fetal cell lines in the Johnson & Johnson vaccine.

While some have tried to debunk this concern using general terms, the answer lies in the technicalities of how the cell lines have been used, as detailed in ”Several COVID-19 Vaccines Are Made Using Aborted Fetal Cells.” The general terms that self-declared fact-checkers like to use when rating something false or misleading is in fact, false and misleading.

There have been cell lines commonly used in vaccine development that originated from aborted fetuses.26 Several vaccine makers used at least one of these cell lines in the development of COVID-19 vaccines, including Moderna, AstraZeneca and Johnson & Johnson.

One argument for using fetal cell lines during the production of vaccines is the claim that the cells are clones of the original. This is like saying your 20-year-old or 40-year-old body is no longer your body since all the cells are copies of those when you were a baby.

They are, in essence, a clone of the original. However, there is virtually no difference between cells that grow and multiply in a petri dish and those that grow and multiply in your body during your lifetime. If the cells in your body are still you, then the cells in the petri dish are still those of the original aborted fetus.

The government agency reasons given for the slowdown in vaccinations, which threatens to create a situation where supply exceeds demand for the vaccine, are superficial. The New York Times quotes Shirley Bloomfield, chief executive of NTCA — The Rural Broadband Association as saying:27

“I’ve got some pockets where they cite religious reasons with the Johnson & Johnson vaccine. There are a lot of pockets where people have already had Covid and a sense of, ‘Well, we’ve all already gotten it, so we’re not really pressed.’”

In early May 2021, the White House announced that 100 million people in the U.S. were fully vaccinated.28 According to a reporter from The Hill, “Authorities need to dispel the legitimate concerns that make people hesitant, while also stopping waves of misinformation.”29 How do you dispel concerns that are legitimate without using your own misinformation?

The news media appears to classify those who are vaccine hesitant based on their political affiliation, continuing to cite Trump supporters as those who might want to create chaos around vaccinations. Yet, according to a recent poll reported in The Hill,30 only 30% of Republicans said they would not get the vaccine, and only 35% of the U.S. is fully vaccinated.31

As the number who are willing to get jabbed by a genetic experiment begins to wane, it’s difficult to justify how vaccine hesitancy can fall along political lines. To put this another way, 40% of the U.S. population now identifies as Republican,32 and 30% of those said they would not get the vaccine. If politics were a significant factor for vaccine hesitancy, then only 12% of the U.S. population would not be willing to be vaccinated.

Some of the reasons being cited for an unwillingness to take an experimental vaccine include some of the side effects without talking about the side effects, potential safety without describing why there may be safety issues and a belief that COVID-19 isn’t a problem. In each case, the reasons for hesitating are downplayed and countered.

Let’s not overlook that this is also a huge payoff for mainstream media. In the end, they are getting a huge chunk of this. Our local free newspaper from a nearby town has been full of front page covid propaganda paid for by the state for the last year. Now it’s time for the big media outlets to get paid.

Interesting Patrick, how they hide behind a liability shield for vaccines, when the injection is not a vaccine but a genetically altering bioweaponry-medical devise.