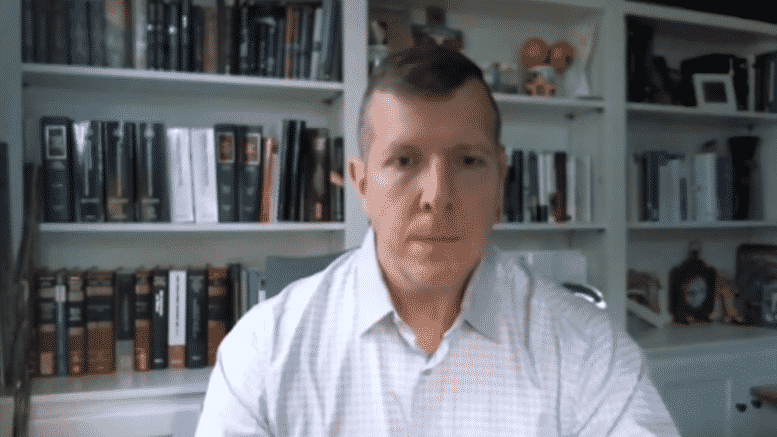 Please Share This Story!
PDF 📄
The evidence discovery process in federal court will be fiercely opposed by Big Pharma lawyers and all complicit government officials caught in the coverup. Expect massive backlash and censorship from Big Media and Big Tech quarters. ⁃ TN Editor

Attorney Thomas Renz filed a lawsuit in federal court in Alabama on July 19 that alleges a massive government cover-up of injection-related U.S. deaths that number “at least 45,000.”

The suit, filed on behalf of America’s Frontline Doctors in U.S. District Court for the Northern District of Alabama, is based on a sworn statement by a government insider under federal whistleblower protection.

Speaking at the Re-awaken Tour event held July 17-18 in Anaheim, California, Renz made the bombshell announcement he says is based on a whistleblower with access to government computers and can prove that “at least 45,000” Americans have already been killed by the three COVID-19 vaccines authorized for emergency use by the FDA.

Watch video below of Renz’s 11-minute speech at the Re-awaken Tour Conference:

These numbers are very close to what Dr. Peter McCullough reported in a video posted June 20 by LeoHohmann.com, Behind the Vaccine Veil: Doctor cites ‘whistleblowers’ inside CDC who claim injections have already killed 50,000 Americans.

Renz is a partner at Renz Law, a Fremont, Ohio-based law firm that specializes in cases fighting against medical tyranny.

He encouraged everyone at the conference and viewing online to share the news about the lawsuit with friends, family and on social media.

“Yeah, go ahead and post it, it will be censored in about five seconds,” he said. “Let me say this to Google-YouTube, Facebook, Twitter. You are complicit in causing death and I cannot wait to sue you, over and over again.”

A government insider named only as “Jane Doe” is the whistleblower. She has access to the servers of the the Centers for Medicare and Medicaid Service or CMS.

“Under threat of perjury, this woman attested to this and she is an expert. We know based on what she said, that there have been at least 45,000 deaths from this vaccine,” Renz said. “I’m going to tell you what I know. I know based on this woman’s testimony, because she has seen the inside of the systems, there have been at least 45,000 deaths, based on how many people died within three days of the vaccine in just one system that’s reporting to the federal government.”

The CDC’s own reporting system, called the Vaccine Adverse Event Reporting System, provides numbers of people, updated weekly on Fridays, who have died or been injured by drug treatments in the U.S.

The COVID vaccine deaths reported to VAERS stood at just under 11,000 as of last Friday, July 16. This represents more deaths reported from all other vaccines combined since the VAERS system was established in 1990.

Vaccine makers have the best of all possible business models. On the one hand, they are shielded from liability by a special government program that protects them from lawsuits being filed by those harmed by their products. On the other hand, these Big Pharma corporations are often able to get governments, universities and other big corporations to mandate the injection of their drugs into people’s bodies.

The left’s mantra, “my body, my choice” works for abortion rights but doesn’t seem to carry the same weight when fighting against a pharmaceutical giant that spends billions every year on media advertising and lobbying members of Congress.

Renz said there are about a dozen different systems that are reporting deaths and injuries to the government.

“How many have really died and why are they covering it up?” Renz said. “These people are murdering people. This is complicity at a minimum.”

“I am telling you we have someone who is sworn under penalty of perjury that there’s been at least 45,000 …and my guess, I’ve been working on this for a while now, is that it’s an immensely higher number. They know it, and they are covering it up. And I want investigations immediately.”

Renz said social media companies that censor this information are taking a risk.

“You’re going to get censored when you try to talk about this. And you know what, if they try to censor the risk, I would say that’s complicity, and I cannot wait to find out in court.”

He challenged people to make posts on Twitter and Facebook pointing to the “45,000” who have lost their lives from these experimental, emergency-use only vaccines that still don’t have full FDA approval.

The federal law that allows for emergency-use authorization of medical treatments requires that people receiving the treatment have “informed consent,” meaning they accept the treatment of their own volition and are informed of all the potential risks.

This is not happening in many cases, where Americans are simply being told, over and over by high government officials, corporate pharmacies and medical practitioners, that the vaccines are “safe and effective.”

The injections from Pfizer have an 80 percent failure rate in Israel, Renz said.

“They don’t work. The absolute risk reduction of these vaccines is 1 percent,” he said.

Renz was referring to the Pfizer and Moderna clinical trials, which showed the absolute risk reduction for those getting the vaccine was 1 percent less of getting a severe case of the virus compared to those who got a placebo.

“And they want to experiment on my babies?” he said. “I’ve got an 8-year-old and an 11-year-old and as God is my witness, hell will freeze over before I stand down on this.”

“We need to share this information everywhere,” he continued. “We want everyone to hear this. I want investigations in Congress.”

He implored his listeners to “take action.”

“I can promise I’m going to do my best [in court], but if I were you I would take action.”

According to his law firm’s website, Renz “and his network of Medical Freedom Fighters are fighting hard every day to protect your Constitutional rights. He has dedicated his entire practice to fight Big Pharma Poison, Big Tech Censorship, Big Media Lies, and Big Government Vaccine / Covid Propaganda.”

He said courage from everyday Americans will be what ultimately brings victory against the medical tyranny that has been rolled out over the last 18 months.

“Have some courage. The only reason you’ve heard about me is I’m willing to fight. That’s the only reason. I’m not special. You have to be willing to fight. And I want to encourage everyone here to have the courage to fight and to get others involved. They need to hear about this. This number was attested to in a case and came from someone who has access to government computers. It wasn’t made up, it wasn’t a projection and we actually discuss how we came at that number. You can fight.”

The lawsuit alleges that there is no legitimate national emergency that would qualify the injections for the Emergency Use Authorization that was granted last December by the U.S. Food and Drug Administration. And even if there was an emergency, the suit claims the injectable treatments offered by Pfizer, Moderna and Johnson and Johnson do not treat or prevent SARS-COV-2, also known as COVID-19.

12000 deaths are known. the VAERS system is usually 1-10% of all the real cases due to failure to report or threats to the doctors, etc. Simple multiplication tells me the 45,000 dead figure is probably underestimated.

Let’s put some perspective on Covid: 1. It’s based upon germ theory, an unproven Rockefeller concoction. 2. It was identified arbitrarily. They took lung lavages from 9 people and found common genes (not an organism) between them. These were put into a computer program that “filled in” the rest of the genome. The franken-virus was then found to be a 79% genetic match to COV1, and voila – COV2 was born. 21% mismatch is huge. We share 60% of our DNA with a banana and 99% with chimps. 21% is huge. 3. It is identified using a test that literally… Read more »

[…] Brit PM Boris comes down with the virus again and goes into quarantine. On the American front, an unusual number of deaths attached to the Holy Vaccine  is painted over as “misinformation” on Big Tech that should be censored and erased. […]

[…] Brit PM Boris comes down with the virus again and goes into quarantine. On the American front, an unusual number of deaths attached to the Holy Vaccine  is painted over as “misinformation” on Big Tech that should be censored and erased. […]

The federal law that allows for emergency-use authorization of medical treatments requires that people receiving the treatment have “informed consent,”…
EUA also requires that there is no other form of treatment. Thus the hatchet job on HCQ:
(note the Falsely Discredited section bottom of page)

OMG. Finally, a real warrior! Thank you so much Mr. Renz.

There are so many people just sitting on their hands, allowing their children to be harmed by this ruse, this lie. Thank you, thank you, thank you for upholding the rights of all those who will not act out of fear, stupidity or ridiculous political blindness. Thank you.