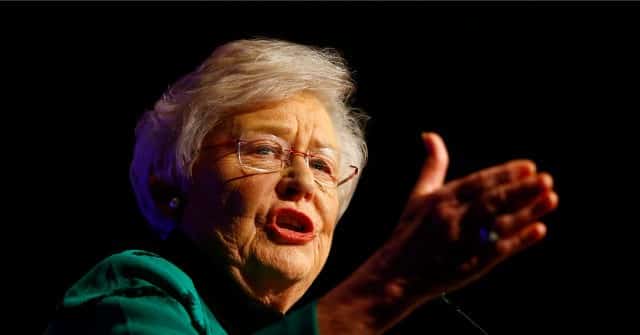 Please Share This Story!
PDF 📄
The political rhetoric against health freedom is spinning out of control as it pivots to outright hatred against those who choose not to be vaccinated. Alabama Governor Kay Ivey is a Republican who is intentionally shredding the social fabric of her state. ⁃ TN Editor

Alabama Gov. Kay Ivey said people are “supposed to have common sense” as she unloaded on unvaccinated people for driving coronavirus outbreaks and hospitalizations in her state.

Only about a third of Alabama’s population is fully vaccinated against COVID-19, putting it worst in the nation alongside Mississippi.

About 49% of the U.S. population is vaccinated. The rates for Alabama and Mississippi are around 34%.

The top reasons people give for not getting the shot include fearing the vaccine side effects are worse than COVID-19 and not trusting the vaccine because it only as “emergency approval” from the U.S. Food and Drug Administration

Ms. Ivey said she doesn’t understand why people would want to “mess around with temporary stuff” when the vaccine is the most long-lasting tool for wrangling the virus.

She said nearly all of the recent hospitalizations are among unvaccinated persons and deaths are “certainly” occurring among those who’ve balked at the shots.

“These folks are choosing a horrible lifestyle of self-inflicted pain. Y’all, we’ve got to get folks to take the shot. The vaccine is the greatest weapon we have to fight COVID, the data proves it,” Ms. Ivey said, noting she took the vaccine in December.

Patrick Wood is a leading and critical expert on Sustainable Development, Green Economy, Agenda 21, 2030 Agenda and historic Technocracy. He is the author of Technocracy Rising: The Trojan Horse of Global Transformation (2015) and co-author of Trilaterals Over Washington, Volumes I and II (1978-1980) with the late Antony C. Sutton.
Subscribe
34 Comments
Oldest
Newest Most Voted
Inline Feedbacks
View all comments

One who boasted of religious liberty has become a hypocrite! True religious liberty is based on an individual’s conscience BEFORE GOD, not toward elected officials, and especially liars. She is no different than John Calvin. This is how you use the Lord’s name in vain Kay. https://yellowhammernews.com/kay-ivey-putting-faith-first/

Someone responded to me the other day that if I was obeying God. I would take the covid injections. So I suspect the Lord will get all the blame for folks getting sick and dying after they lined up for their bioweapon injections.

OMG. “if I was obeying God”. Talk about stupid upon stupid upon stupid. The stupid are now calling the fascists GOD’s messengers? OMG. That’s beyond the pale. We have a precedent for this person’s quote. The German people did the same thing to one another. They raised Hitler to the highest position of power because he pointed a finger at the Jews as the fall guys because, he said, they were dirty and spread disease. Stupid always, always points a finger. And, of course, we have the last two generations who are masters at off-loading responsibility via projection. The perfect… Read more »

CORRECTION: ‘Alabama’s RINO Governor Kay Ivey Unleashes Hate: ‘Start Blaming The Unvaccinated Folks’
Good GAWD!!! Just LOOK at IT! IT is 100% L.ib.Ta.rd!! ALL L.ib.Ta.rds are BUTTTTTTT-FUGLY! (that’s how you KNOW they are a L.ib.Ta.rd)

Undercover democrats who run on the Republican ticket since conservatives know that satan has taken over the Democratic party. That’s one way communist democrats are tricking people into voting for them. Satan has a few more steps to take before he takes total control of the Republican party too.

She sounds like someone that drank the kool-aid (narrative). Good luck getting re-elected.

A blue pill gulper for sure.

Well, if it was true that the unvaccinated are dying and getting sick then Ivey should be glad those folks are being erased from the map. Don’t you think so?

Right. Why should anyone care since the non-vaccinated are such a health threat to the vaccinated cult.

Forgot to mention while ago. Truth be told. It is the vaccinated that are getting covid infections, being hospitalized after having adverse reactions, dying from covid variants, blood clots, etc. There have been over 1 million vaccine injuries world wide since the beginning of this mass vaccination program. Close to 30 thousand deaths from the VAERS databases worldwide. What we’re looking at is fear mongering round two. The same tactics that were used to convince the first round of covid injectections.

YOU are correct. Reporting has shown just that. The legacy fake media just keeps lying and lying and lying. Their support of the stinky subterfuge of the fascists is sickening.

FACT: The vaccines weren’t made to prevent infections.
so what is it then Kay?
So just using your own ‘common sense’ narrative Kay, should show any experimental jab is even more dangerous/reckless and useless as wearing a mask 24/7 that don’t work either.
But.. you rino marxists love demanding and berating the citizens to get it.
why is that exactly?

This woman who boasts of being a Christian will certainly be held responsible/accountable for leading people to their deaths or lifelong injuries that many have sustained after receiving these bioweapons. Make no mistake about it, God will judge those at some point for their crimes against humanity! I wonder how many in office have refused to be vaccinated because they know what these so called vaccines are designed to do? Her age and obesity are certainly not in her favor if she were vaccinated. Hopefully, the people of that state will call for her removal from office!

Is Ms. Ivey ignorant or intentionally deceiving?
The vaccine manufacturers themselves say the mRNA does not prevent nor infection. It just reduces a couple symptoms.
How long till people call them out on these lies?

Freedom is messy especially when you let the serfs have a say in how to conduct their own lives as adults. Vote her out is the answer. Time to organize.

No Ms. Ivey,we are choosing life, liberty, health and happiness. You on the other hand with your Genocide jab are choosing death, not really hard to understand your anger. It’s called remorse. So, in other words go to hell!

Yikes! The lies, deception and storytelling they all doing is “off the charts”. I see this season in time as a great revealing and where “loyalties really lie” .

This woman is obviously about as ignorant and uninformed as any Leftist Ive heard about. My question to her is, “if the vax is ‘the answer’ then will she be willing to accept any responsibility for adverse effects or deaths that occur as a result of this vaccine?” If not, then STFU!

I don’t believe that 49% has been vaccinated. I suspect that they inflate the numbers to herd the sheep.

The alleged covid cases didn’t start this year until the mass vaccination started. Funny thing was we heard nothing but decreases prior to the start of vaccinations. As a person who spends more cash on health care premiums in one month than I spend on doctor visits, treatments and medications combined. I think I am more than qualified to make better healthcare decisions for myself. Besides I am blessed to have the blessings of the Lord no thanks to the existence of globalists and delusionals.

If they come out with a vaccine that provides immunity to being ugly, she should take the vaccine and a booster, then one every 6 months there after.

On the push for getting the jab, follow the money. Pfizer alone is projected to make $30,000,000,000 (that’s $30 BILLION) from the vaccine in 2021. Also, 9 new billionaires have been added to the list of the super rich — all nine connected to the pharmaceutical industry. Go figure!

“Kay Ivey said people are “supposed to have common sense”” Yes. They certainly are Ms. Ivey. Why do you exhibit none whatsoever? The globalists’ 47% vaxxed (likely a lie, as they are liars), means half of the nation is on their knees praying to the gods of globalism out of fear and plain ol’ stupidity. Well, thank heavens it’s only 47%. And good! The majority of people in Alabama seem to be on the right side of the argument. Watch out folks. The so-called globalists who are nothing more than fascists have declared out loud a war on Americans. They will… Read more »

Its time to have a genuine conservative gov for Alabama, not a spineless democrat in republican clothing! If the so called vaccine did work why are fully vaccinated people still testing positive? It is experimental gene therapy. The most basic right should be over your own body to choose what is put in you. If anyone concocted a substance in thier house & claimed it cured anything, & started injecting people with it they would be in prison. That is exactly what is going on now.People have a right to be suspect of why they are pushing these vax so… Read more »